Advanced Search
Christopher Marlowe was an English playwright, poet, and translator, who lived and worked in the Elizabethan era. He was born to a father who was a shoemaker. Christopher was a contemporary of William Shakespeare, who attributed him to be a great influence on him but became a more successful playwright. Christopher’s master’s degree was mired in controversy, as the ‘Privy Council’ had pushed the university management to award him a degree on behalf of his “services” to the Queen. This led people to believe that he was a secret government spy. He went on forging a career as a playwright. Two of his initial plays were ‘Dido, Queen of Carthage’ and ‘Tamburlaine the Great.’ However, he mostly wrote plays on controversial themes. Several of his plays, such as ‘The Jew of Malta’ and ‘The Massacre at Paris,’ dealt with themes that were not looked upon very kindly by society. In May 1593, he was arrested and was put on trial. He was stabbed to death by a British businessman named Ingram Frizer a few days later. Sophie Hunter
26th February In History
DID WE MISS SOMEONE?
CLICK HERE AND TELL US
WE'LL MAKE SURE
THEY'RE HERE A.S.A.P
Quick Facts

Cause of Death: Murder By Stabbing

British People
Playwrights
British Men
Male Poets
Pisces Poets
Childhood & Early Life
Christopher Marlowe was born in the last week of February 1564, in Canterbury, Kent, England, into the working class family of John Marlowe and Catherine. John worked as a shoemaker. The exact date of Marlowe’s birth is now known, but it is known that he was baptized on February 26, 1564. Thus, it can be assumed that he was born a few days prior to the date. He was thus around 2 months older than William Shakespeare.
Nothing much is known about his early schooling. In 1579, he joined ‘The King’s School’ in Canterbury as a scholar. He was an exceptional student and was interested in arts and literature ever since he was a kid. He also has a house named after him in Canterbury.
In 1580, he entered the ‘Corpus Christi College,’ from where he resumed his education and pursued a BA degree. His family could not afford higher education for him. Hence, Marlowe joined college on a scholarship. He completed his degree in 1584, but it was not without its own share of troubles.
He later aspired for an MA degree from the same college, but rumors suggested that he was thinking of getting ordained as a Roman Catholic priest. Hence, the university management did not award him his degree when he graduated in 1587. The ‘Privy Council’ intervened and pushed the management to award his degree on time, as Marlowe had provided a “fair dealing” and “good service” to the queen.
The nature of the “good service” was never quite revealed and only gave way to several speculations about his supposed undercover job as a spy for the Queen. The rumors received an additional spark later when he got arrested without any given reason.
Following his graduation, he made a career as a writer. 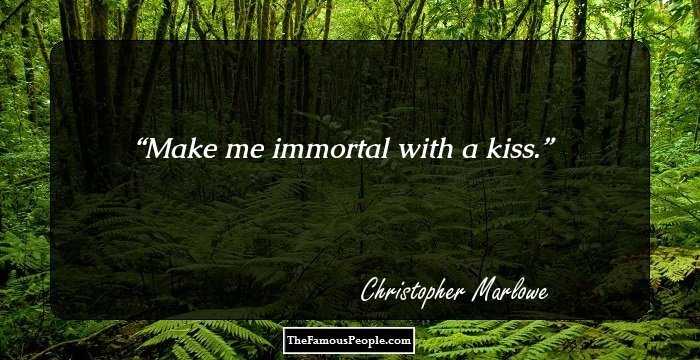 Quotes: Me
Continue Reading Below
Career
Marlowe moved to London to build a career in literature and playwriting. He was a self-confessed atheist and blatantly denied the existence of God and Jesus Christ. However, the English society back then did not view atheists as harshly as they did a few centuries prior, so Marlowe got by quite easily. However, the trouble began when he started including his ideas in his work.
While he was still in college, he wrote his first play, titled ‘Dido, Queen of Carthage.’ The short play narrated the story of Queen Dido, the first Queen of Carthage, and her love for the Trojan hero named Aeneas. The play was dark and intense and was performed for the first time by the ‘Children of the Chapel’ in 1587. It was published many years later, in 1594.
However, his first play that was performed on a regular stage was ‘Tamburlaine the Great.’ The play was performed in London in 1587 and told the story of Timur, the great Mongol conqueror who was born into a shepherd family and went on to become one of the greatest warlords in history.
The play was the first of kind, as it was written in blank verse. It became a great success. It was played in many theaters across London, and Marlowe then wrote a second part to the play, which was also a big success. The play was officially published in 1590. All of his other plays were only published after his demise.
In 1592, his third play, titled ‘The Jew of Malta,’ was staged. However, it was written a year or two prior. The story was about the Jew Barabas and his heinous revenge on the city authorities. It also had an extremely controversial prologue. The show found huge appreciation among the masses and was staged regularly for the next 50 years.
His next play was titled ‘Edward the Second.’ It talked about the deposition of King Edward, perpetrated by his barons and the Queen. In July 1593, a few weeks after his death, the play entered the ‘Stationer’s Register.’ The play dealt with controversial themes, such as religion and sodomy, but became extremely popular with the masses.
His next play was titled ‘The Massacre at Paris.’ It featured real events that took place in 1572. English Protestants viewed it as the darkest example of Catholic treachery. It turned into a hugely controversial play, as it featured a “spy-like” character, which was believed to be based on Marlowe himself. It was a short play that somehow agitated people to commit crimes against refugees from the “low countries.”
He later wrote the play titled ‘Doctor Faustus.’ The play has two versions of texts. It was another massively controversial play but became successful nevertheless.
Marlowe had a successful career as a playwright and part of the credit for this goes to the legendary actor Edward Alleyn, whose stage presence was enormously attractive.
Apart from writing plays, Marlowe also wrote poems such as ‘Hero and Leander’ and ‘The Passionate Shepherd to His Love.’ He is also speculated to be the co-author of the three ‘Henry VI’ plays. There has been no conformation regarding the same. 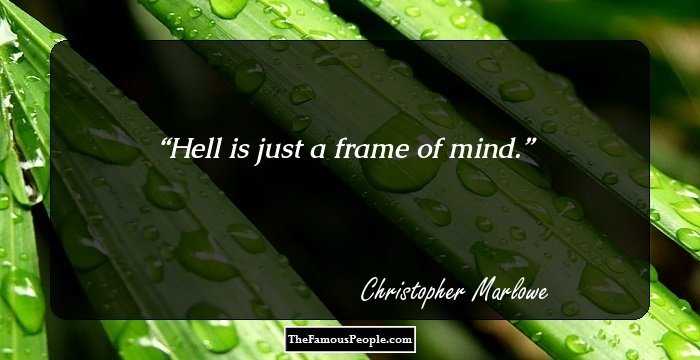 Controversies & Death
Marlowe was an atheist. In the Elizabethan times, this was dangerous, as it somehow implied that he was an enemy of God and hence also of the state.
He was rumored to be gay.
On May 18, 1593, a warrant was issued for his arrest, without describing any reason. However, it is implied that his arrest was related to some “blasphemous” texts that he had written, as they were deemed dangerous for the society.
On May 20, he was brought to trial by the ‘Privy Council’ for questioning. There was no record of that meeting and of the several other meetings that took place in the coming days.
An English businessman named Ingram Frizer stabbed him to death on May 30, 1593. Whether the attack was related to his arrest or not is not clear.

Quotes By Christopher Marlowe | Quote Of The Day | Top 100 Quotes

See the events in life of Christopher Marlowe in Chronological Order