Advanced Search
Chloe Lukasiak is a dancer, reality TV star, model and actress. Taking dancing lessons since the age of two, Chloe, along with her mother Christi, later took part in the very famous dance reality show ‘Dance Moms’ as one of the original cast members. She appeared on the show for four seasons during 2011-14. After the fourth season, she left the show due to altercation with her dance trainer Abby Lee Miller, in whose team she was performing. Since then she has appeared on a number of TV shows and music videos, both as herself and a performer. She has been nominated ‘Choice Dancer’ in Teen Choice Awards twice in 2015 and 2016, winning the award in 2015. She is also into modeling and took part in an anti-bullying campaign for the American dancewear company, Just For Kix. She already has a few movies to her credit. She was cast in the Lifetime TV movie ‘Center Stage: On Pointe’, she landed a role in the Indie film ‘Loophole’ and is a part of the upcoming feature film ‘Cowgirl's Story’. She has recently launched online subscription-based dance tutorials, ‘Dance Classes With Chloe’. 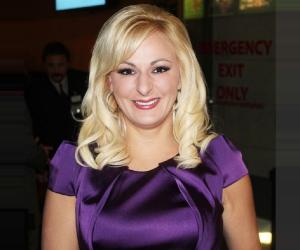 American People
Contemporary Dancers
American Women
Pennsylvania Actresses
Female Dancers
The Meteoric Rise To Stardom
Chloe Lukasiak first gained popularity as a participant of Lifetime's reality show ‘Dance Moms’ where she performed for Abby Lee Dance Company. Due to the controversy surrounding her medical condition and her exit from the dance show, she also appeared in a few talk shows like ‘The Doctors’. She has been featured in many music videos during and after the dance show. She performed for artists like Brooke Hyland and Jess Godwin. Chloe had social media presence even before appearing on Dance Moms; joining YouTube in 2010 and Twitter in 2011. After leaving the show, Chloe became more active on her social media accounts. She currently has over 4.8 million followers on Instagram and over 706k followers on Twitter. Her main YouTube channel where she posts vlogs, fashion and makeup tips and dance videos, has gained over one million subscribers with over 126 million views on her videos. She recently created another YouTube channel, "MoreChloeLukasiak" to post blogs and behind-the-scenes footage of her life.

What Makes Chloe Lukasiak So Special
Chloe has been one of the best performers and the main competitor to Maddie Ziegler, Abby Lee Miller's lead dancer for the show. However, Abby hardly ever gave Chloe any credit, which made many fans of the show furious. When she left the show, many of the fans of the show supported Chloe against Abby. It has been revealed that Abby had even criticized Chloe for having 'lazy eyes' while she was actually suffering from a medical condition known as 'silent sinus syndrome'. After leaving the show, Chloe had come out with her problems in a video and she has been praised by many for having the courage to talk about her private issues like she did. According to Chloe, she always tries to be honest about herself to her fans on social media.

Beyond Fame
Chloe Lukasiak dated singer and actor Ricky Garcia, member of the boy-band ‘Forever in Your Mind’, for about a year during 2015 and 2016. They often used to share pictures of them together on their social media accounts. Chloe once faced criticism after posting a picture of her sitting on boyfriend Ricky's lap, which fans thought would set a bad example to her much younger fan base. They also criticized her mother Christi, who had been known to manage her daughters' social media accounts for some time, for allowing her to post such images. She later removed the picture from her account and avoided posting pictures of Ricky. When Ricky took another girl to the 2016 Radio Disney Music Awards, fans of Chloe got furious and started posting hate comments on his Instagram account. In response to that, Chloe requested her fans to stop hating Ricky or his new friend, stating that everyone deserves to be happy. The two finally decided to part ways due to their busy schedules. Fans, however, blamed Ricky for using her to rise to fame and were of the opinion that Chloe was being misled by the ‘Best Friends Whenever’ star.

Behind The Curtains
Chloe Lukasiak was born to Marc and Christi Lukasiak on May 25, 2001 in Churchill, Pennsylvania. She has a younger sister Clara, who is also her close friend. Chloe's mother and sister also appear in her videos very often. When her sister joined YouTube, Chloe promoted her channel on her Twitter account. Chloe is friends with many of her former ALDC teammates like Paige Hyland, Nia Frazier, and Brooke Hyland. Paige Hyland has appeared on her YouTube channel a few times. It is said, however, that Chloe is not in good terms with former ‘Dance Moms’ co-star Maddie Ziegler.