Advanced Search
Toni Morrison, born Chloe Ardelia Wofford, was a novelist and professor who had won several prestigious awards for her literary works. As the recipient of the Nobel Prize in Literature and the Pulitzer Prize among many other awards, she was one of the most brilliant authors in the genre of African American literature. The seeds for her future profession were sown by her father who told her stories and fables of the African culture which influenced her writings. Primarily a professor by profession, she began writing as a part of an informal group of writers and poets, and published her first novel ‘The Bluest Eye’. The critical reviews she got for her debut motivated her to write more. She developed a style of writing that is characterized by epic themes, descriptive dialogues and rich depictions of Black American culture. She went on to write several other novels that were critically appreciated and won her numerous awards. Her novel, ‘Song of Solomon’ was the first novel by a black writer to be chosen the main selection of the Book-of-the-Month Club in almost four decades. She was already famous by the time the novel ‘Beloved’ was published but this book took her popularity to greater heights. The novel won the Pulitzer Prize for fiction and was later made into a film of the same name. Image Credit
https://www.flickr.com/photos/ala_members/4739834565/in/photolist-8dQTFB-VpMJdG-VpMJM7-UeJv8V-UeJuQa-UeJwRK-kmErzV-9c9frn-VgLCTP-yzvTB-VpMLwu-f4dWBf-yE3rM-f3YJBv-f3YKm8-5JMwc-75F1b4-cV33A1-f4dY2b-VgLBYT-6CLCbB-f3YHsZ-QPy9ay-nVDUH4-f4dXE7-f3YGsi-dawBRH-f3YGbB-pkQSnD-7ZvwJ4-f4dYzE-f3YKUi-f4dXPW-f3YFUg-f3YH4P-f4dXaY-UeJvH2-f4dYV7-f4dYbE-f3YHH8-f4dVXA-6rhtB8-VgLC5e-RDjTzp-e91kPs-UeJw8a-UeJw28-UeJveX-VtiwnP-w4ZKec
(ALA The American Libra)
Previous   Next

American Celebrities
African American Women
African American Authors
Nobel Laureates In Literature
Novelists
Childhood & Early Life
She was born as one of the four children of Ramah and George Wofford. She hailed from a working class family. Her father was a welder who also worked at other odd jobs while her mother was a domestic worker.
Her family instilled in her a love for reading and storytelling; Jane Austen and Leo Tolstoy were among her favourite authors. She was a good student and graduated with honours from Lorain High School in 1949.
She enrolled at Howard University and received her B.A in English in 1953. She completed her Master of Arts in English from Cornell University in 1955. 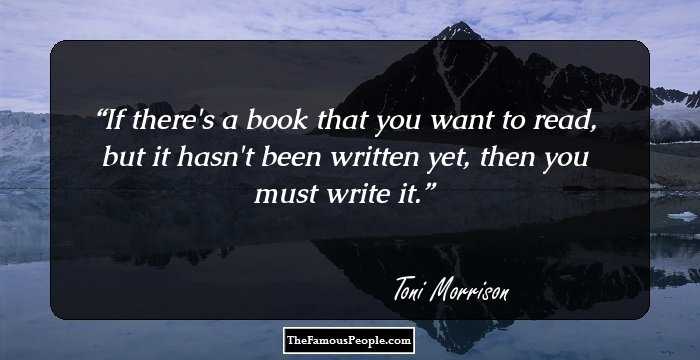 Quotes: You
Continue Reading Below
Career
She was appointed as an English instructor at Texas Southern University in 1955. She worked there for two years before returning to Howard in 1957 to teach English.
By 1964, she was married with two children. However, her marriage broke up and she moved to New York to work as a textbook editor. Later she found work as an editor at the New York City headquarters of Random House.
While working as an editor she played a vital role in bringing black literature into the mainstream by editing books by prominent black authors like Henry Dumas, Angela Davis and Gayl Jones.
She joined an informal group of writers and poets who held meetings where they discussed their work. She wrote a short story for one such discussion that revolved around a black girl who wished to have blue eyes. She expanded this story into her debut novel, ‘The Bluest Eye’ in 1970.
Her next novel ‘Sula’, published in 1973 was about the friendship between two girls in a black neighbourhood and how their friendship evolves and changes over time.
In her novel, ‘Song of Solomon’ (1977), she told of the life of Macon “Milkman” Dead III, an African American male. The book traces his life from birth to adulthood. This book was chosen for Oprah Winfrey’s popular book club.
She was appointed to the Albert Schweitzer chair at the University of Albany in 1984. She held the Robert F. Goheen Chair in the Humanities at Princeton University from 1989 until her retirement in 2006.
She published her best known novel, ‘Beloved’ in 1987. The novel was set in post Civil War America and dealt with the story of an African American slave Margaret Garner who temporarily escaped slavery before being recaptured.
During the 1990s she wrote two novels: a historical novel ‘Jazz’ in 1992 and a novel about gender and class called ‘Paradise’ in 1997.
Continue Reading Below
She was selected by the National Endowment for the Humanities for the Jefferson Lecture in 1996. The lecture is U.S. federal government’s highest honor for achievement in the humanities.
She wrote the English libretto for the opera ‘Margaret Garner’ in 2005. She had previously based her novel ‘Beloved’ on the life of the runaway slave Margaret Garner; this opera too was based on the same woman.
In 2011, she worked with opera director Peter Sellars and Malian singer-songwriter Rokia Traoré on a new production, 'Desdemona'. It was a new look at William Shakespeare's tragedy Othello.
In 2012, her novel 'Home' was published. It was dedicated it to her son Slade Morrison. The novel depicts the story a Korean War veteran in the segregated United States of the 1950s.
Toni Morrison's last novel 'God Help the Child' was published in 2015 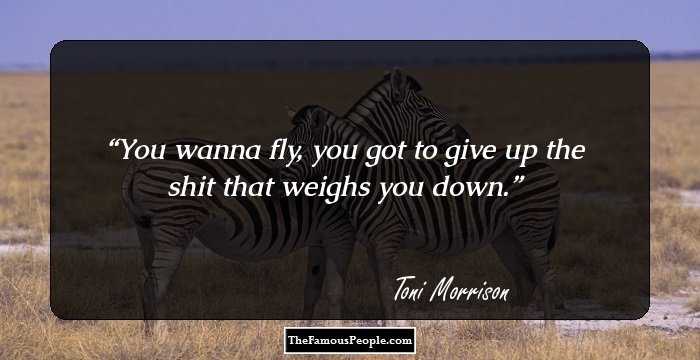 Quotes: You
Major Works
Her 1977 novel ‘Song of Solomon’ is one of her major novels. The book not only won the National Books Critics Award, but was also cited by the Swedish Academy in awarding her the Nobel Prize in Literature.
Her novel ‘Beloved’ inspired by the life of the escaped slave Margaret Garner was a critical success. The novel was later adapted into a movie starring Oprah Winfrey.
Awards & Achievements
She won the Pulitzer Prize for Fiction for her novel ‘Beloved’ in 1988.
She was awarded the Nobel Prize in Literature in 1993 for her novels “which characterized by visionary force and poetic import, gives life to an essential aspect of American reality". 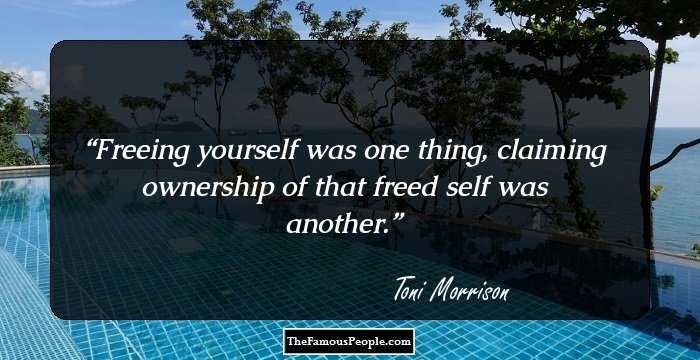 Quotes: Yourself
Personal Life & Legacy
She married Harold Morrison, a Jamaican architect and fellow faculty member at Howard University, in 1958. They had two sons and later divorced in 1964. Her son, Slade Morrison, worked with her on several books and literary projects.
Slade Morrison died of pancreatic cancer on December 22, 2010, at the age of 45
Toni Morrison died of pneumonia on 5 August 2019, at Montefiore Medical Center in The Bronx, New York City, at the age of 88.

Quotes By Toni Morrison | Quote Of The Day | Top 100 Quotes

See the events in life of Toni Morrison in Chronological Order