(One of the Best-Selling Music Artists and 'Goddess of Pop')

Advanced Search
Academy Award, Golden Globe and Grammy Award winning singer and actress, Cher, is referred to as the ‘Goddess of Pop’. A high school dropout, she began a career in music at the age of sixteen and later formed the group called ‘Sonny and Cher’ along with singer Sonny Bono, whom she eventually fell in love with and married. The husband and wife duo, first gained recognition with the hit single ‘I've Got You Babe’ after which they continued to top the charts with their subsequent albums. She also managed to carve out a successful solo career for herself and earned great fame as a solo artist with her albums, ‘Believe’ and ‘Living Proof’. She has also carved a niche for herself in the field of acting and has starred in the award winning films ‘Moonstruck’ and ‘Silkwood’. She has also had a successful stint on television and has starred in the award winning variety TV show ‘The Sonny & Cher Comedy Hour’. Recognized as the ‘World's Number One Pop Icon’, Cher has an estimated net worth of $ 305 million and has established herself and one of the A-list singers in the American music industry. To learn more interesting facts about Cher, continue to read this biography American People
Pop Singers
American Women
California Actresses
Taurus Singers
Childhood & Early Life
Cher was born as Cherilyn Sarkisian in El Centro, California to John Sarkisian, a truck driver and Jackie Jean Crouch, an actress and model. Her parents got divorced when she was just ten-months.
She attended the Montclair Prep private school in Encino, Los Angeles, where she fared well in French and English. In school, she would perform on songs during the lunch break for her fellow students.
At the age of 16, she moved to Los Angeles with a friend and enrolled herself for acting classes, while she simultaneously worked as a dancer in clubs to earn a living.
In 1962, she met singer, Sonny Bono, who introduced her to record producer Phil Spector, who employed her as a backup singer and also produced her debut single ‘Ringo, I Love You’. 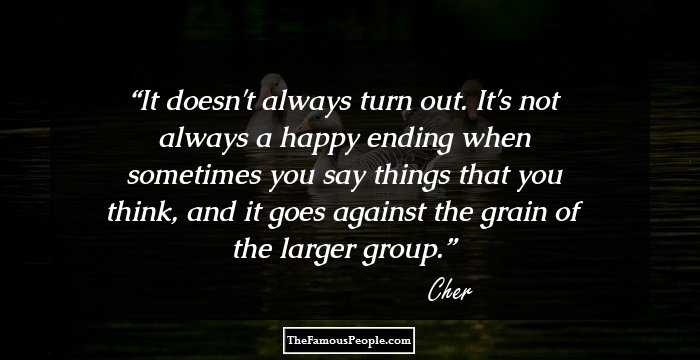 Continue Reading Below
Career
In 1964, she worked with Sonny Bono to form the group called ‘Caesar & Cleo’. They came out with the singles ‘Do You Wanna Dance?’, ‘Love Is Strange’ and ‘Let the Good Times Roll’.
In the late 1960’s, she signed a contract with ‘Liberty Records' Imperial’ and the label released her solo single titled ‘Dream Baby’. The song was successful regionally and received airtime in Los Angeles.
On October 16, 1965, she came out with her debut solo album ‘All I Really Want to Do’. The album was produced by her husband Sonny Bono and received positive reviews.
In 1965, they changed their name from ‘Caesar & Cleo’ to ‘Sonny& Cher’ and recorded the hit song ‘I Got You Babe’. That year, they also came out with their debut studio album ‘Look at Us’.
In April 1966, her second album ‘The Sonny Side of Ch�r’, one of her successful albums, was released under the Imperial Records label. The album ‘Where Do You Go’ and the hit song, ‘The Girl from Ipanema’.
In October 1966, her third album titled ‘Cher’ was released by Imperial Records. The album was a commercial success and featured the singles ‘Alfie’ and ‘I Feel Something in The Air’.
In 1967, her fourth album ‘With Love, Ch�r’ was released. The album was a success and the following year, she came out with her fifth album ‘Backstage’, which was a commercial failure.
Released in 1969, her sixth album ‘3614 Jackson Highway’ was also a commercial failure. The same year, she starred in the film ‘Chastity’, the film was a flop and did not do much to her career.
In 1971, she came out with her seventh studio album ‘Gypsys, Tramps & Thieves’. That year, she starred in variety TV show ‘The Sonny & Cher Comedy Hour’.
Continue Reading Below
During the 1970’s she released the albums ‘Foxy Lady’, ‘Bittersweet White Light’, ‘Half-Breed’, ‘Dark Lady’, ‘Stars’, ‘I'd Rather Believe in You’, ‘Cherished’, ‘Take Me Home’ and ‘Prisoner’.
In the 1980’s she came out with the albums ‘I Paralyze’, ‘Cher’ and ‘Heart of Stone’. She was also seen in the movies ‘Silkwood’, ‘Mask’, ‘Suspect’, ‘The Witches of Eastwick’ and ‘Moonstruck’.
In the 1990’s she appeared in the films ‘Mermaids’, ‘Faithful’, ‘If These Walls Could Talk’ and released the albums ‘Love Hurts’, ‘It's a Man's World’ and ‘Believe’.
In 2000, she came out with the album, ‘not.com.mercial’ and the following year, one of her bestselling albums ‘Living Proof’ was released in Europe.
In June 2013, she released the single ‘Woman’s World’, which is part of her album ‘Closer to the Truth’, which is scheduled to be released in September 2013. 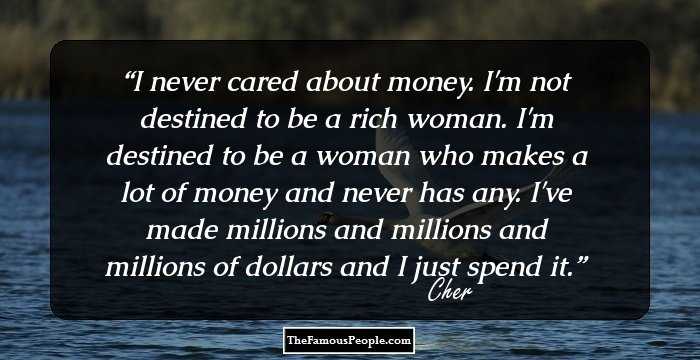 Major Works
One of her most popular and successful albums ‘All I Really Want to Do’ peaked at number 16 on the ‘Billboard 200’ and the title track of the album was her first solo hit that featured on Canadian, Dutch and Swedish single charts.
One of Sonny & Cher’s hit singles ‘I Got You Babe’ peaked at the number one position for three weeks on the ‘Billboard Hot 100’. One of their bestselling albums, it sold 1 million copies in the U.S and is also featured at number 444 on the ‘Rolling Stone’ magazine’s list of ‘500 Greatest Songs of all time’.
Awards & Achievements
In 1974, she received the Golden Globe award in the category, ‘Best TV Actress - Musical/Comedy’, for the TV show ‘The Sonny & Cher Comedy Hour’.
In 1984, she won the Golden Globe Award in the category, ‘Best Performance by an Actress in a Supporting Role in a Motion Picture’ for the film ‘Silkwood’.
In 1988, she received the Academy Award in the category, ‘Best Actress in a Leading Role’ for the film ‘Moonstruck’. She also won the Golden Globe that year for the same film.
In 2000, she received the Grammy Award in the category, ‘Best Dance Recording’ for ‘Believe’. 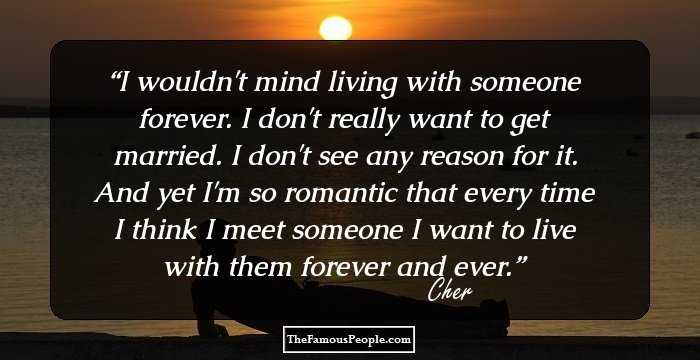 Personal Life & Legacy
In 1964, she secretly married Sonny Bono in a hotel room in Tijuana, Mexico. They had a child together.
After divorcing her first husband, she married Gregg Allman on June 30, 1975 and they had a child together. The marriage ended in a divorce in 1979.
Trivia
This award winning American actress and singer was the first girl in school to wear mid-riff bearing tops.

Quotes By Cherilyn Sarkisian | Quote Of The Day | Top 100 Quotes

See the events in life of Cherilyn Sarkisian in Chronological Order