Advanced Search
Elijah Blue Allman is an American singer, guitarist and artist. He is the son of pop icon, Cher, and rocker, Gregg Allman. Professionally known by his stage name Phillips Exeter Blue I, Elijah Blue Allman is the founder-member of the heavy metal band 'Deadsy'. As part of the band, he has released three albums: 'Deadsy' (1996), 'Commencement' (2002) and 'Phantasmagore' (2006). After the band went into hiatus in 2007, he started a solo project titled 'Elijah Blue and the Trapezoids' and released three demos on his MySpace page in 2008. Since 2014, he has hinted multiple times that the band Deadsy might stage a comeback very soon. He has been featured on a number of songs from contemporary rock bands including Orgy, Sugar Ray, Coal Chamber, Thirty Seconds to Mars and Korn. He is also a painter whose inaugural exhibition, 'Step-and-Repeat' at Kantor Gallery in April 2010, was a runaway success. In August 2010, he held another exhibition called 'Stuff of Legends' at the Madison Gallery in Malibu. A vehement critic of the superficiality of the life of celebrities, his paintings and installations at both exhibits acted as "commentaries on the unholy marriage of celebrity and commerce". Michelle Branch
DID WE MISS SOMEONE?
CLICK HERE AND TELL US
WE'LL MAKE SURE
THEY'RE HERE A.S.A.P
Quick Facts 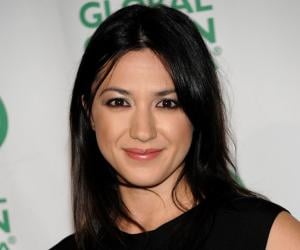 American People
California Musicians
Tall Celebrities
Tall Male Celebrities
Male Singers
The Meteoric Rise to Stardom
Elijah Blue Allman was exposed to the world of music at an early age due to the parties hosted by his parents at their home which were frequented by prominent figures from the music industry. However, according to him, at that time he was not able to fully appreciate this opportunity. At the age of 13, he received his first guitar as a gift from Gene Simmons, the bassist of the band Kiss, and went on to tour with his mother, as a guitarist. In 1989, he appeared in the music video for her song 'If I Could Turn Back Time', playing the guitar. In 1994, he made an unsuccessful attempt at securing the spot of the guitarist for 'Nine Inch Nails'. He then took the stage name Phillips Exeter Blue I and formed the heavy metal band 'Deadsy' in 1995. He served as the guitarist and the lead vocalist of the band, which also included Alec Püre on drums, Dr. Nner on synthesizer, Carlton Megalodon on Ztar, and Jens Funke on bass. The band has released three albums so far.
Recommended Lists:

Cancer Singers
Male Musicians
Cancer Musicians
Male Guitarists
Continue Reading Below
Controversies & Scandals
Elijah Blue Allman made news headlines in early 2014 as he opened up about his rift with his mother, Cher, following his marriage to English singer, Marieangela ‘Angie’ King. The couple briefly lived with Cher in her Malibu compound before their marriage, but later moved out as the situation became tense. Elijah, who is not the person to wait for someone's approval, decided to elope with his fiancée after his star mother didn't congratulate him following his engagement. When the couple eventually got married, they decided not to invite Cher. In return, she did not invite the newly married couple to the family Christmas celebration at her house, which resulted in an angry twitter rant on his part.
Stating that the mother and the son have a history of not talking, he revealed that they didn't talk for a couple years after he formed his band. He also revealed that their relationship suffered after he was sent to boarding school at the age of seven. His mother even punished him once by sending him to a military school. While talking about his childhood, he revealed that he started taking drugs at the age of 11. In the following years, during his battle with drug addiction, he suffered life-threatening overdose many times and had to go through rehab. He also claimed that his mother did not take it seriously when he was diagnosed with Lyme disease in 2007, an experience that he describes as "the closest to death I’ve ever been”.
Recommended Lists:

Cancer Guitarists
American Singers
American Musicians
American Guitarists
Personal Life
Elijah Blue Allman was born on July 10, 1976, in Los Angeles, California, to celebrity parents Cher and Gregg Allman. His mother is a star singer popularly known as the 'Goddess of Pop', while his father was a singer-songwriter and musician who was one of the founding members of the 'Allman Brothers Band'. His parents divorced in 1979. He has one half-brother, Chaz Bono, from his mother's side, and four half-siblings, Delilah, Michael, Layla and Devon Allman, from his father's side. His father, who suffered from liver cancer, passed away on May 27, 2017.
At various points in his life, Elijah has dated celebrities like Bijou Phillips, Heather Graham, Kate Hudson and Paris Hilton. While in Germany to treat Lyme disease, he met ‘Angie’ King on a blind date and was immediately in love. The couple got married on December 1, 2013, at their Beverly Hills home. She is part of a German pop band which is signed to Elijah’s own record label Trankilo.
Recommended Lists: