A Jewish rabbi, critically acclaimed writer and a novelist, Chaim Potok gained international acclaim with his debut novel, ‘The Chosen’. His novels were mostly built around the concept of Jewish identity, their struggle to cope with urban life and clash between secular and religious views. Many of his publications are set in the metropolitan parts of New York City, where he grew up. He was raised to be a traditional Orthodox Jew and received Jewish education. He also served in the United States Army and was involved in the Conservative Jewish movement. Some of his notable works include, ‘The Promise’, ‘My Name Is Asher Lev’, ‘Davita's Harp’, ‘The Gift of Asher Lev’, ‘Wanderings: Chaim Potok's History of the Jews’ and ‘Old Men at Midnight’. Apart from writing, he had a keen interest in art and painting as well. He was also a visiting Professor at the University of Pennsylvania and spent a year in Israel, where he wrote his doctoral thesis. He was the managing editor of the ‘Conservative Judaism’ magazine and editor-in-chief of the ‘Jewish Publication Society’. Sylvia Plath
Novelists #849
Writers #2817
Continue Reading Below
DID WE MISS SOMEONE?
CLICK HERE AND TELL US
WE'LL MAKE SURE
THEY'RE HERE A.S.A.P
Quick Facts

American Celebrities
American Men
University Of Pennsylvania
Male Writers
Male Novelists
Childhood & Early Life
Chaim Potok was born as Herman Harold Potok in Buffalo, New York to Jewish parents Benjamin Max and Mollie. He was raised with Jewish beliefs and received an orthodox Jewish education.
He was inspired to choose writing as his career option, after reading the Evelyn Waugh novel ‘Brideshead Revisited’. He began to write at the age of 16.
At the age of 17, he submitted his first piece of writing to ‘The Atlantic Monthly’, a magazine. Even though his work was not published, he received a letter from the magazine editor, who appreciated his writing.
In 1950, he graduated from the Yeshiva University with a B.A in English Literature. During his period of study, his stories were published in the University magazine.
In 1954, he graduated from the Jewish Theological Seminary of America, where he was ordained as a conservative rabbi. Subsequently, he became the director of Leaders Training Fellowship, a Jewish organisation.
From 1955 to 1957, he served in the U.S Army in the South Korea and after his return he worked at the University of Judaism in Los Angeles and became involved in the Conservative Jewish movement.
In 1964, he re-located to Brooklyn, where he took the position of managing editor of the magazine, ‘Conservative Judaism’. Next year, he started serving as the editor-in-chief of the ‘Jewish Publication Society’ in Philadelphia.
In 1965, he obtained his Ph.D. in philosophy from the University of Pennsylvania, where he also taught for a brief period. His dissertation was on Salomon Maimon, a German philosopher whose parents were Jewish. 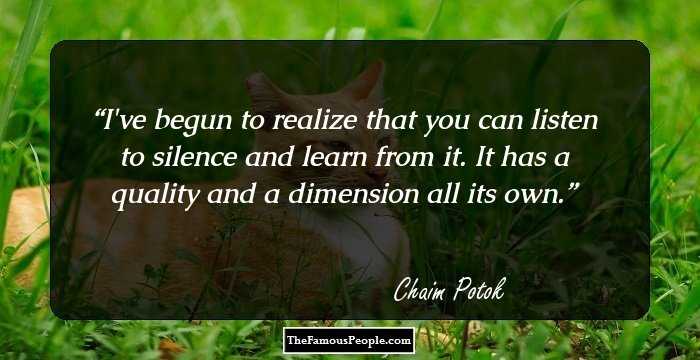 The Hottest Male Celebrities With The Best Abs
Career
In 1967, he published his first book, ‘The Chosen’, which was one of his most popular and award-winning books. The novel is set during the death of President Roosevelt and the end of World War II.
Published in 1969, his novel ‘The Promise’ was a sequel to his first book ‘The Chosen’. The book dealt with the identity issues between Orthodox and Hasidic Jews and was set in the 1950s.
In 1972, he came out with the novel ‘My Name Is Asher Lev’, which revolved around a Hasidic Jewish boy, who had a keen interest in art. The novel was adapted on Broadway in 2012.
In 1975, two of his works, ‘In the Beginning’ and ’The Jew Confronts Himself in American Literature’, were published.
In 1978, his book, ‘Wanderings: Chaim Potok's History of the Jews’ was published. The book offered an insight into the history of the Jewish civilisation.
In 1981, his debut novel ‘The Chosen’ was made into a film, in which he made a cameo appearance as a professor. The film won an award at the World Film Festival, Montreal.
His 1985 novel titled ‘Davita's Harp’ is his sole novel to have a female protagonist. The plot centres on ‘Ilana Davita Chandal’, a New York born girl of a Christian father and a Polish-Jewish mother.
In 1990, his novel ‘The Gift of Asher Lev’ was published. The book was a sequel to his previous novel, ‘My Name Is Asher Lev’. The story revolves around a middle-aged Hasidic painter.
In 1996, he came out with the novel, ‘The Gates of November’, which depicts the life of a Jewish father and son spanning across the soviet history.
Continue Reading Below
Published in 1998, his book, ‘Zebra and Other Stories’ is a collection of six children’s stories. Each of these stories is centred on middle-class or upper-middle-class families.
Published in 2001, his novel, ‘Old Men at Midnight’, is a story of a woman,’ Ilana Davita Dinn’, to whom three different men narrate the stories of their lives. The book is an extremely moving and thoughtful piece of writing. 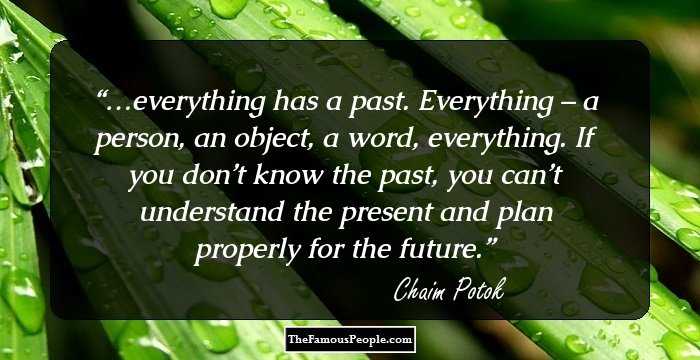 Quotes: You, Future, Past
Major Works
His first book, ‘The Chosen’ was featured on The New York Times’ bestseller list and remained there for a period of 39 weeks. It was one of his bestselling books - it sold 3,400,000 copies and won the Edward Lewis Wallant Prize. The book was also nominated for the National Book Award.
His novel, ‘The Promise’, a sequel to ‘The Chosen’, was awarded the Athenaeum Literary Award, which is presented by Athenaeum of Philadelphia.
Awards & Achievements
In 1997, he was awarded the Honorary Doctorate in Humane Letters by the La Sierra University.
In 1997, he received the Jewish Cultural Achievement Award. 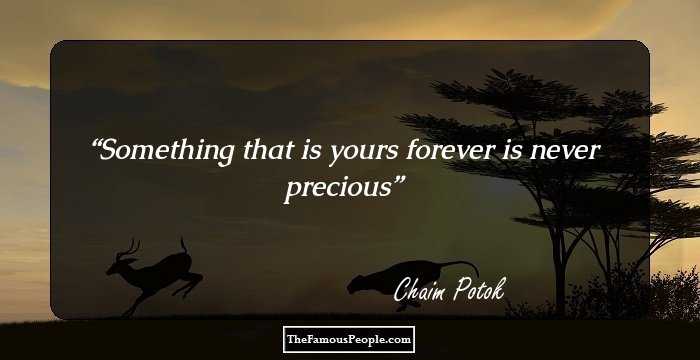 Quotes: Never
Personal Life & Legacy
On June 8, 1958, he married Adena Sara Mosevitzsky, a social worker, whom he met in California. The couple had three children together.
In 1970, he moved to Jerusalem along with his family but came back to Philadelphia in 1977.
Later, he was diagnosed with brain cancer and died at the age of 73, at his house in Merion, Pennsylvania.
Trivia
This acclaimed Jewish author was also a talented artist and recreated the painting, ‘The Brooklyn Crucifixion’, a piece of art that was created by one the characters in his novel.
You May Like

Quotes By Chaim Potok | Quote Of The Day | Top 100 Quotes

See the events in life of Chaim Potok in Chronological Order