Advanced Search
Carla Bruni is a former model turned singer who rose to worldwide prominence after her wedding to the then President of France, Nicolas Sarkozy, in 2008. This exotic beauty of Italian descent first entered the world of modeling as a teenager and soon became one of the top-paid models with her good looks and graceful demeanor. She worked for the likes of Christian Dior, Givenchy, John Galliano and Versace during her peak years. She was brought up in a wealthy industrial family; her grandfather was the founder of the tire manufacturing company, CEAT. Both her parents had an innate love for music and the young Carla taught herself to play the guitar. Initially she wanted to pursue a career in architecture but then abandoned the idea and chose to become a model instead. She quit modeling when the love for music overpowered her and released her debut album in 2002. She has brought out four studio albums, five music videos and several singles so far. This pretty lady has been involved in humanitarian work and philanthropic activities. Having lost a brother to AIDS, she is an active crusader for HIV/AIDS research. She also made the headlines for the numerous affairs she has had with high-profile men prior to her marriage with Sarkozy.

Vanessa Paradis
DID WE MISS SOMEONE?
CLICK HERE AND TELL US
WE'LL MAKE SURE
THEY'RE HERE A.S.A.P
Quick Facts

French People
Italian People
Family Members
French Women
Italian Women
Female Models
Childhood & Early Life
She was born as Carla Gilberta Bruni Tedeschi to Italian concert pianist Marisa Borini. Marisa’s husband Alberto Bruni Tedeschi is Carla’s legal father though her biological father is Maurizio Remmert who once had an affair with her mother.
She is the heiress of a business empire—tire manufacturing company CEAT--that was founded by her legal grandfather. She was brought up in a wealthy household.
Her family moved to France in 1975 and she attended boarding school in Switzerland. She went to Paris to study art and architecture. However, she quit college to pursue a career in modeling. 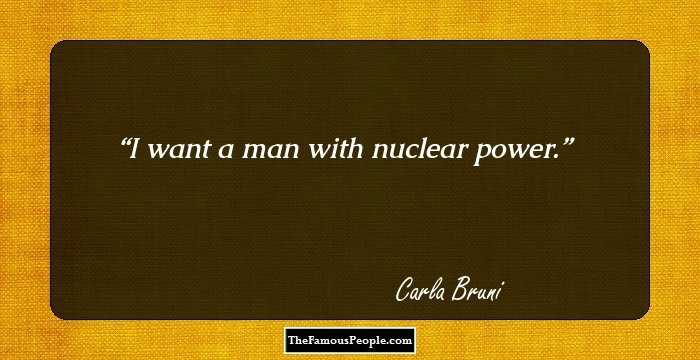 Quotes: Power, I
Continue Reading Below
Career
She began working as a model when she was 19. Her pictures caught the eye of Paul Marciano, president and creative director of ‘Guess?’ who selected her to model for the brand.
With her glamorous looks and poise she soon became a top model and worked for designers and brands like Christian Dior, Paco Rabanne, Karl Lagerfield, Chanel, and Versace. She was counted among the 20 highest paid fashion models during the 1990s.
She always had a deep love for music and in 1997 she quit modeling to focus on her music career. She sent some of her songs to Julien Clerc who based six tracks of his album ‘Si jetais elle’ on them.
She released her debut album ‘Quelqu'un m'a dit’ in 2002. The album peaked at No. 1 on the French Album chart and reached the top ten in Germany, Switzerland, Italy, Portugal and Chile.
Several songs of her debut album were later featured in the movie ‘Le Divorce’ (2003), American film ‘Conversations with Other Women’ (2005), and ‘(500) Days of Summer’ (2009).
She wrote the lyrics for ten songs for the singer Louis Bertignac’s album ‘Longtemps’ in 2005. She also sang two duets with him that were featured on his other albums.
Her next album ‘No Promises’ was out in 2007. It consisted of poems by famous poets like W.B.Yeats, Emily Dickinson, and Dorothy Parker set to music. It was, however, not as successful as her debut album.
In the year 2008, she brought out the album ‘Comme si de rien n'�tait’. She wrote the lyrics for most of the songs, and announced that the royalties from the album would be donated to different charities.
She sang a duet—The Beatles' song ‘And I Love Her’—with Harry Connick, Jr. in 2009 for the French edition of his album ‘Your Songs’.
Continue Reading Below
She acted as a museum guide in Woody Allen’s romantic comedy ‘Midnight in Paris’ in 2011. The film was a big hit, and the entire ensemble cast, including Bruni was nominated for a number of awards. 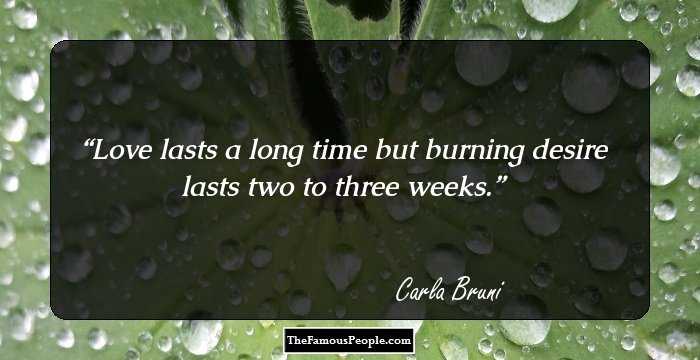 Quotes: Love, Time
Major Works
Bruni is a former supermodel once counted among the 20 highest-paid fashion models. As a singer she has one hit French album to her credit and is also well-known in the international social circuit as the wife of the former French President Nicolas Sarkozy.
Awards & Achievements
She won a European Border Breakers Award (EBBA) in 2004, which is presented to artists who reach audiences outside their own countries with their first internationally released album in the past year.
Personal Life & Legacy
She has been previously linked with several high-profile men like Mick Jagger, Eric Clapton, Charles Berling and former French Prime Minister Laurent Fabius.
She had an affair with philosophy professor Raphael Enthoven which resulted in the birth of a son in 2001. The couple broke up in 2007.
She met French president Nicolas Sarkozy in 2007 and married him the next year. They have a daughter.
She has been involved in humanitarian work and philanthropic activities since long. She supports several charitable organizations and campaigns, especially those which deal with animal rights and AIDS research.
Trivia
She was named in Tatler’s top 10 best-dressed list in 2010.
A nude photograph of this former model was sold at auction for US$ 91,000.

See the events in life of Carla Bruni in Chronological Order