Cao Cao, also known by the name Mengde, was a Chinese warlord who became very strong during the final years of the Eastern Han Dynasty. He served as the penultimate Chancellor of the dynasty and was widely regarded as one of the greatest Generals of the Han dynasty towards its end. After the Han dynasty lost its powers, the Three Kingdoms period was ushered in by the formation of the state of Wei. Cao Cao was a very prominent figure of that period and played a key role in laying the foundations for the state of Cao Wei. He was the adopted grandson of the favourite eunuch of the Imperial court and showed signs of aggression and cunningness from an early age. Even as an adolescent he was known to be sly and manipulative. He was made the Captain of Cavalry when the Yellow Turban Rebellion broke out and was assigned the task of suppressing the rebels which he did successfully. He proved to be a bold, shrewd and domineering leader who gradually rose to great powers. He was a skillful general and one of the most popular figures of Chinese legend. Regarded as a military genius, he was posthumously honoured as "Emperor Wu of Wei".
Continue Reading Below Chinese People
Chinese Men
Male Leaders
Chinese Leaders
Chinese Military Leaders
Childhood & Early Life
Cao Cao was the son of Cao Song. His father was the foster son of Cao Teng, the chief eunuch of Emperor Huan.
He was taught hunting and music as a young boy. Even as a teenager he was known for his cunningness in deceiving people to get what he wanted.
A character evaluator by the name of Xu Shao once told him that he would be a “capable minister in peaceful times and an unscrupulous hero in chaotic times”. 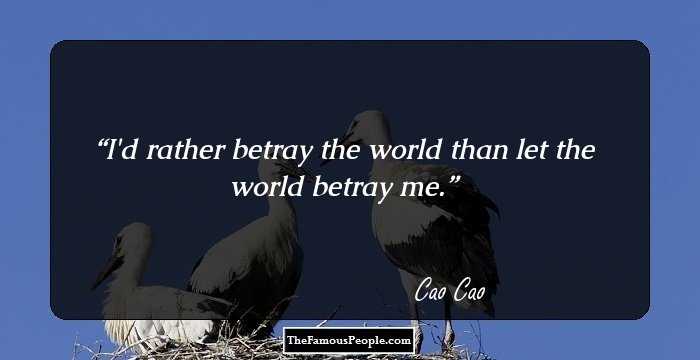 Famous Beautiful Women With Green Eyes
Career
He became the district captain of Luoyang when he was 20 years old. The Yellow Turban Rebellion broke out in 184 and he was appointed the Captain of cavalry and sent to Yu Province. He successfully suppressed the rebels and went to Ji’nan to prevent the spread of the rebellion.
He adopted aggressive methods of controlling the rebels in Ji’nan. He banned unorthodox cults and supported Confucianism because of which local leading families were offended. He resigned in 187.
During this time he refused to accept the post of Administrator of Dong Commandery and also declined to join Wang Fen in his coup to replace Emperor Ling with the Marquis of Hefei.
He was made “Colonel Who Arranges the Army” in Luoyang in 188. He was one of the eight heads of a newly established imperial army, the Army of the Western Garden. This new army was however disbanded the very next year.
The Emperor Ling died in 189 and his son came to rule as Emperor Shao; however most of the power was primarily in the hands of Empress Dowager He. Her brother, He Jin, hatched a plot to eliminate the Ten Attendents—a group of eunuchs in the imperial court.
General Dong Zhuo was appointed to lead his army into Luoyang. The eunuchs became aware of the plot and killed He Jin. Dong Zhuo deposed the Emperor Shao and placed a puppet Emperor Xian on the throne.
The regional warlords in Chenliu formed a military alliance under the leadership of Yuan Shao, of which Cao Cao was a member. The coalition however broke up after some months when Dong Zhuo was killed in 192.
Cao Cao was of the belief that Xu Province’s governor had killed his father. Thus he took revenge by massacring thousands of civilians in the Xu Province in 193. Through such wars, he was expanding his powers gradually.
He convinced Emperor Xian to make Xuchang the new capital in 196. Cao Cao was appointed the General-in-Chief, and many viewed the Emperor as a puppet in his hands.
Continue Reading Below
Yuan Shao had since then become the most powerful warlord in China, and Cao cao wanted to maintain good relations with him. However his attempt of forging goodwill was misinterpreted as an attempt to humiliate Yuan Shao.
Yuan Shao and his large troops met Cao Cao and his smaller troop in Guandu, an important point on the Yellow River, in 200. The two parties were unevenly matched as Yuan Shao’s troops consisted of 100,000 men while Cao’s army only had 20,000 men. However, under Cao Cao’s brave leadership, his army won the battle.
Historical records indicate that Cao Cao was a brilliant leader known for his aggressive leadership and cunningness. He was a very brave warrior skilled in the art of fighting.
He was also a talented poet and his verses played a significant role in refining the poetic style of his time. Most of his poetic works have been destroyed over time. He is also credited to have contributed to the Shanshui poetry genre.
The Battle of Guandu, which was fought by Cao Cao against the great warlord Yuan Shao in the final years of the Eastern Han Dynasty, was one of the biggest victories he had achieved. The war marked the beginning of the gradual expansion of northern China which ultimately led to the establishment of the state of Cao Wei. 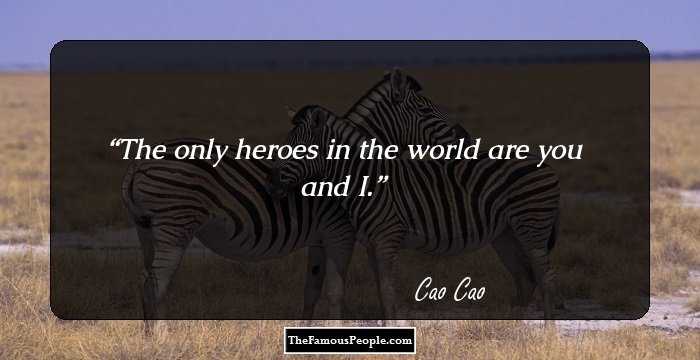 Quotes: You, I
Personal Life & Legacy
Cao Cao had several wives and concubines including Lady Ding, Lady Wang, Lady Yin, Lady Huan, Consort Zhou, and Consort Liu. He also had numerous children through his relationships with many women.
Some historical records state that he suffered from a brain tumor because of which he experienced excruciating headaches. He died of an illness in 220.
Trivia
This famous Chinese warlord appears as a character in the video game series, Koei's Romance of the Three Kingdoms.
You May Like

See the events in life of Cao Cao in Chronological Order