Robert Joseph Dole, popularly known as Bob Dole, was an American politician, attorney and a World War II veteran. Nominated by the Republican Party, he entered the House of Representatives in 1961, and went on to represent Kansas in the United States Senate from 1969 to 1996. In 1976 election, he was the vice presidential nominee and was also the Republican presidential nominee in the 1996 election. He retired from active politics after he lost the Presidential election in 1996; but remained associated with numerous domestic as well as international programs. He appeared in number of television programs and commercials. He also served on various councils. The ‘George McGovern-Robert Dole International Food for Education and Child Nutrition Program’, which helps to fight child hunger and poverty in developing countries, is one of them. He also raised funds for erecting the National World War II Memorial. He wrote many books and also worked as Special Counsel to the well known law firm Alston & Bird. On January 17, 2018, Dole was awarded the Congressional Gold Medal. Ron DeSantis
22nd July In History
DID WE MISS SOMEONE?
CLICK HERE AND TELL US
WE'LL MAKE SURE
THEY'RE HERE A.S.A.P
Quick Facts

Bob Dole was born on July 22, 1923 in Kansas, the son of Doran Ray Dole and Bina M. His father ran a small creamery. Bob had three siblings; Kenny, Gloria and Norma.

When the Great Depression of 1930 set in, the financial condition of the family was severely affected. They had to move into the basement of their house and rent out the upper floors. To raise additional cash, Bob started working as a paper boy and a soda jerk in the local drug store. The drugstore owner later recalled him as a good worker.

Robert Joseph Dole graduated from Russell High School in 1941, and enrolled at the Kansas University. There he joined a premedical course. He excelled in sports and soon became a member of the basketball team, football team and track team. However, he left college as United States joined the Second World War.

Bob Dole enlisted in the army in 1942. In time, he became a second lieutenant in the 10th Mountain Division of the US Army and was sent to Italy in 1944. In 1945, while trying to rescue an army radioman, Bob was badly injured in a German machine gun attack.

His right shoulder was shattered and the vertebrae in his neck and spine were fractured. He had metal shrapnel throughout his body and was paralyzed from the neck down. Bob was subsequently brought back to United States, where he underwent treatment for three long years.
Encouraged by family and friends Bob decided to take advantage of G.I. Bill, which provided financial assistance to war veterans for education, and got enrolled in University of Arizona to study Art. However, after a year he came back to Kansas to study law at Washburn Municipal College in Topeka. He received his LLB degree in 1952. 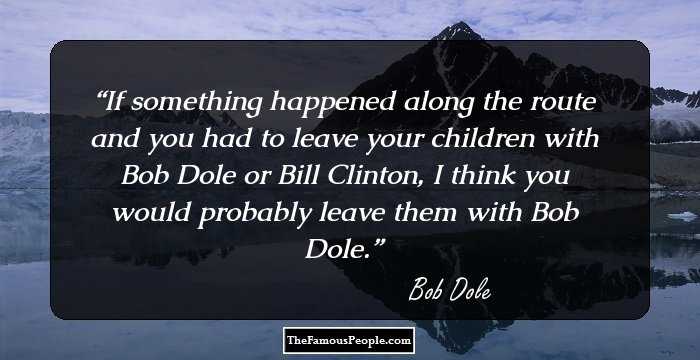 Robert Joseph Dole entered politics while he was still in college. In 1950, he was elected to the Kansas House of Representatives on Republican ticket. By the time his term ended in 1952, he had secured his L.L.B. degree and was admitted to the bar. He then started practicing at Russell and soon became the County Attorney of Russell County.

In 1961, Bob entered the national political arena as a member of United States House of Representatives.

Robert Joseph Dole was one of the few leaders who could bridge the gap between the conservatives and the moderates. He supported the civil right bills; yet voted against public housing subsidy and healthcare plans. However, he pleaded for the federal aid to the handicaps and for lowering eligibility for receiving federal food stamps.

Bob also became the Republican Vice presidential nominee in 1976, but failed to win. Then in 1996, he became the party’s nominee for Presidential election. This time too he lost to President Bill Clinton. 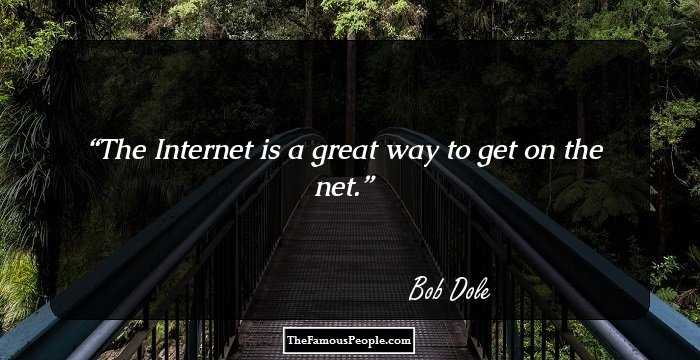 After losing the 1996 presidential election Bob Dole decided to retire. However, he remained active after his retirement. He served on various counsels and appeared in numerous television programs and commercials. He also concentrated on his career as a lawyer and dedicated a lot of his time and energy to his law firm.

Continue Reading Below
In 2003, Dole founded Robert J. Dole Institute of Politics in Kansas. It is a nonpartisan political institute aimed at bringing back bipartisanship back to politics. In addition, he became involved in many domestic as well as international programs aimed at combating hunger and poverty.
The ‘George McGovern-Robert Dole International Food for Education and Child Nutrition Program’ is another feather in his cap. The program, created by Bob Dole and George McGovern and funded largely by US Congress, provides free meals to more than 22 million children across 41 countries.
Major Works

Bob Dole worked towards various domestic as well as international programs aimed at combating hunger and poverty. He also played an instrumental role in the construction of the privately funded WWII memorial and raised more than $170 million. 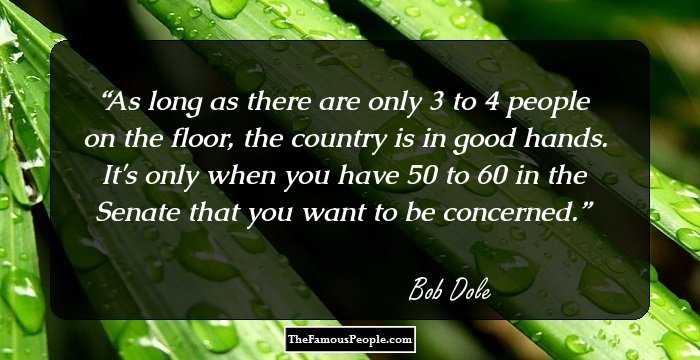 Awards & Achievements
Dole was decorated thrice for his valor in the WW II. He got ‘Purple Hearts’ for his injuries. He also received ‘Bronze Star’ with combat "V" for the valor he showed while rescuing the radioman.
In 1997, he received the Presidential Medal of Freedom by President Clinton for his service in the military as well as for his political career.
In 1997, Dole received the U.S. Senator John Heinz Award for Greatest Public Service by an Elected or Appointed Official.

In 2004, Bob Dole received the American Patriot Award for his lifelong dedication to his country and also for his service in World War II.

Bob Dole married Phyllis Holden, an occupational therapist, in 1948. They had a daughter named Robin, born in 1954. The couple parted ways in 1972. In 1975, he married Elizabeth Halford. They had no children.

Percy Jones Army Hospital, where Bob Dole was treated after the war is now known as Hart-Dole-Inouye Federal Center. The hospital has been renamed in honor of the three patients who later became United States Senators: Bob Dole, Philip Hart and Daniel Inouye.

Bob Dole died on December 5, 2021, of complications from stage four lung cancer at his home in Washington, D.C. He was 98.

See the events in life of Bob Dole in Chronological Order