Bing Crosby was one of the finest American singers of the early 20th century known for his baritone voice. His ‘archetypal crooning’ was appropriate at that time when sound-recording techniques were getting advanced and sound motion pictures started coming into existence. He earned recognition after launching his own program at the CBS radio station in New York City, soon after which he began getting offers from Hollywood. At this point in his career, he was also emerging as a singer and later millions of copies of his records were sold. He rose to prominence with ‘White Christmas’, which later became one of the most successful singles of all time. During his time, he was credited with nearly 300 hit singles that topped the music charts. His career took a different turn, when he teamed with his friend Bob Hope, an American comedian and starred in seven successful ‘Road’ film series, with him. He soon began to prove his mettle as an actor and became the recipient of various prestigious awards. In his later years, his work reduced considerably and he began appearing in several television programs, and hosted his own show. He was often admired for his persona and his occasional ‘crooning’.

American Celebrities
Pop Singers
American Men
Washington Actors
Taurus Actors
Childhood & Early Life
Harry Lillis Crosby was born in Tacoma, Washington, but moved to Spokane, Washington at the age of three. He was the fourth his seven siblings.
In 1910, a neighbour began calling him ‘Bingo from Bingville’, which was taken from his favourite comic strip, ‘The Bingville Bugle’. The nickname, after dropping the last vowel, became his name for the rest of his life.
In the summer of 1917, he worked as a property boy at the ‘Spokane’s Auditorium’, where he watched several acts, which fascinated him.
He studied in a Catholic school and later, went to Gonzaga High School. He studied law at the Gonzaga University, but later dropped college to accomplish his musical dream, and joined a band, ‘Musicaladers’. 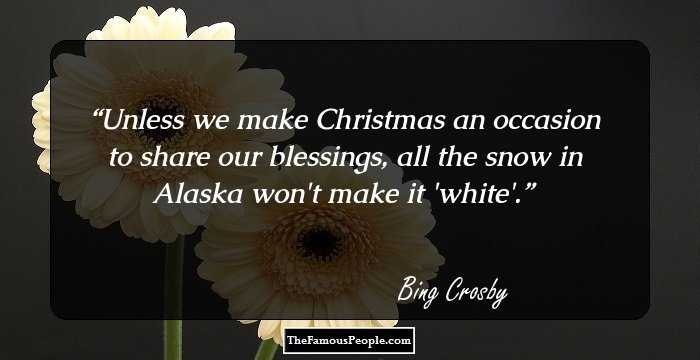 Continue Reading Below
Career
In 1925, he joined vocalist, Al Rinker and they became extremely popular with their vaudeville act, ‘Two Boys and a Piano’, where the performance consisted of individual or combined acts by singers, actors etc. Later, Al Rinker’s brother introduced them to a famous bandleader, Paul Whiteman.
The Crosby-Rinker duo became a trio after Whiteman introduced Harry Barris, a songwriter and pianist, into the group, which they called ‘The Rhythm Boys’. The ‘Rhythm Boys’ performed with Paul Whiteman and soon enough Crosby tasted success.
In 1931, the ‘Rhythm Boys’ appeared in his first sound motion picture, ‘King of Jazz’.
In 1932, he launched his first radio program on the CBS radio station in New York City, which broadcasted his massive hit songs like ‘I found a Million Dollar Baby’ and ‘At Your Command’. His show was aired for nearly 30 years.
He also starred in ‘The Big Broadcast’, an American ‘musical comedy’ film, which he signed with Paramount pictures.
In 1936, he replaced Paul Whiteman and hosted NBC’s (Nation Broadcasting Corporation) ‘Kraft Music Hall’; where he received great appreciation for his radio theme song, ‘Where the Blue of the Night’, which he both sang and composed.
During WWII, he performed at the ‘European Theatre’ and entertained the American troops. Towards the end of the war, he was voted by the U.S. troops as ‘the person who had done the most for American G.I. morale during WWII’.
In 1941, he sang ‘White Christmas’ that soon became a popular hit and was broadcasted on the radio on Christmas.
He appeared in major blockbuster films like ‘Holiday Inn’ (1942), ‘Going My Way’ (1944) and ‘The Country Girl’ (1954). His role in ‘The Country Girl’ was loved by critics for a dramatic portrayal of an alcoholic.
Continue Reading Below
From 1940–1962, he teamed up with Bob Hope in seven musical comedies called ‘Road To’.
In the 1950s, he appeared on popular television shows and launched his own show called ‘The Bing Crosby Show’ in 1964.
In 1977, he recorded the duet ‘The Little Drummer Boy’ and ‘Peace on Earth’, a Christmas special, with singer, David Bowie. 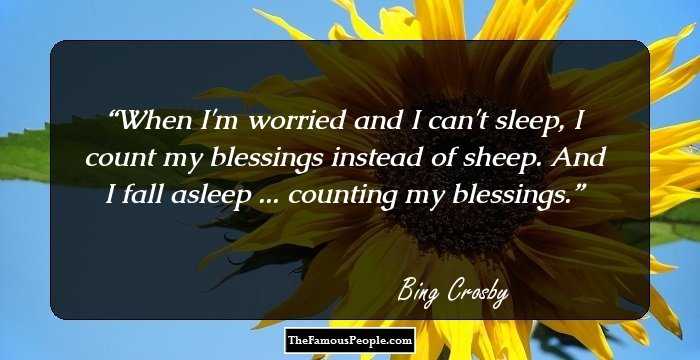 Major Works
His song ‘White Christmas’, which was first used in the musical film, ‘Holiday Inn’, became an instant hit with the masses. After being included in the music charts on October 3, 1942, it rose to the no.1 position on October 31, 1942. It charted the billboard countdown for 11 weeks and sold nearly 100 million copies, along with earning the title of ‘best-selling single of all time’.
Awards & Achievements
In 1944, he won the ‘Academy Award for Best Actor’ for his role as Father Charles O’Malley in the motion picture, ‘Going My Way’.
In 1962, he received the ‘Grammy Lifetime Achievement Award’.
He was inducted into the ‘Grammy Hall of Fame’, ‘Hit Parade Hall of Fame’ and ‘Western Music Hall of Fame’, posthumously. 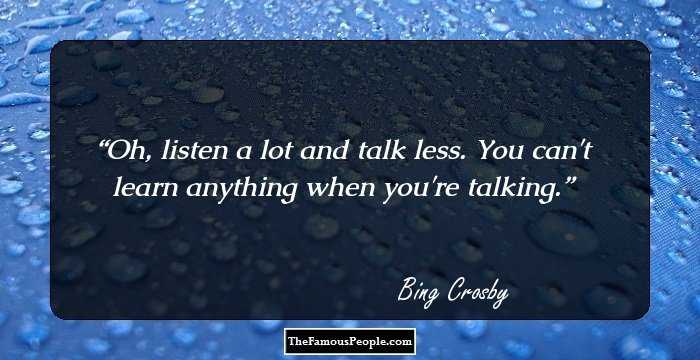 Personal Life & Legacy
In 1930, he married actress/singer Dixie Lee and the couple had four sons. She passed away due to ovarian cancer in 1952.
In 1957, he married actress Kathryn Grant and the couple had three children.
He died of a heart attack while playing golf in Madrid.
Trivia
This famous personality was an avid golfer, and in 1978, he and Bob Hope were voted the Bob Jones Award, the highest honour given by the United States Golf Association in recognition of distinguished sportsmanship.
Just before his death, this famous American entertainer considered buying an eighteen hole golf course in Kent, England.
This Hollywood star’s estate was valued at $150 million, making him one of the wealthiest American entertainers of the 20th century.

Quotes By Bing Crosby | Quote Of The Day | Top 100 Quotes

See the events in life of Bing Crosby in Chronological Order