Sean Michael Leonard Anderson, better known by his professional name Big Sean, is a popular American rapper. Sean, who is currently signed to Kanye West’s GOOD Music and Def Jam, has won several awards including the ‘MTV Music Awards’, and ‘BET Awards’ over the course of his career. He cites stars like Eminem and Kanye West as his inspirations and has released a total of four music albums till date. He began his career with his first official mixtape ‘Finally Famous: The Mixtape’. He came to popularity in 2011, after the release of his debut studio album, ‘Finally Famous’, which was released by GOOD Music and Def Jam Recordings. Debuting at number three on the Billboard 200, the album was a commercial success, selling 87,000 copies in the US within the first week. His latest album ‘I Decided’ was released in February 2017. It was a huge success, peaking at the first position on the US Billboard 200. Probably the best work in his career so far, it was also received favorably by critics. He has made the headlines for some wrong reasons as well. Sean was arrested in August 2011, after a teenage girl claimed she was sexually assaulted by the rapper. After a plea deal, Sean was fined $750. ASAP Rocky
Rappers #85
Singers #393
25th March In History
DID WE MISS SOMEONE?
CLICK HERE AND TELL US
WE'LL MAKE SURE
THEY'RE HERE A.S.A.P
Quick Facts

American People
American Men
Male Rappers
Aries Singers
Male Singers
Childhood & Early Life
Sean Michael Leonard Anderson was born on 25 March 1988 in Santa Monica, California in the United States. His parents are Myra and James Anderson. Sean was raised by his mother and grandmother. From an early age, he was instilled with the principles of hard work and determination.
He attended the Detroit Waldorf School, where he studied from kindergarten till the eighth grade. Later, he attended Cass Technical High School where he started developing his career in music. He also made many friends and fans, along with earning the respect of his peers with his musical skills. 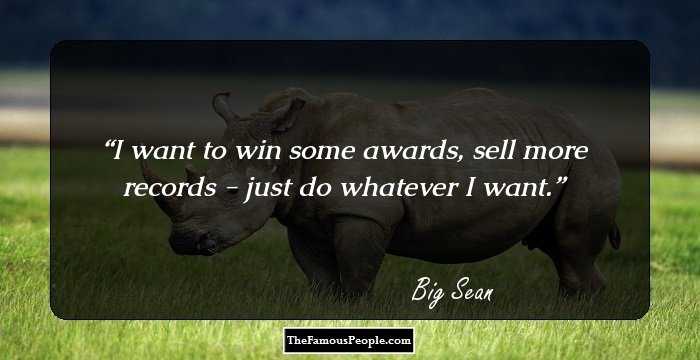 Quotes: Awards, I
Continue Reading Below
You May Like

The Best Black Actresses Of All Time
Career
When Kanye West was doing a radio interview at 102.7 FM in 2005, Sean headed towards the station to meet him and performed some freestyle. West was impressed, though initially he was not very enthusiastic about it. However, two years later Sean was signed by West to GOOD Music.
Big Sean’s first official mixtape ‘Finally Famous: The Mixtape’ was released in September 2007. His single ‘Get’cha Some’, became a hit and received a lot of media attention. He recorded a music video for the song as well, which was directed by Hype Williams. Soon, he also released his second and third mixtapes, ‘UKNOWBIGSEAN’, and ‘Finally Famous Volume 3: BIG” which were released in April 2009 and August 2010, respectively.
In June 2011, his debut studio album, ‘Finally Famous’, was released. The album, which featured guest appearances by stars, such as Kanye West, Wiz Khalifa, and Rick Ross, peaked at the third position on the US Billboard 200 and was a commercial success. Within its first week of release, the album had sold 87,000 copies in the US.
In September 2011, he confirmed that he was working on his second studio album. ‘Mercy’, the lead single from the album, was released in April 2012. The song peaked at the thirteenth position on the US Billboard 200, and received mostly positive reviews.
His second album ‘Hall of Fame,’ was finally released in August 2013. It debuted at number three on the US Billboard 200 and sold 72,000 copies within the first week itself. It also received mostly positive reviews.
His third album ‘Dark Sky Paradise’ was released in February 2015. Featuring guest appearances from stars like Kanye West, Ariana Grande, and Chris Brown, the album debuted at the first position on the Billboard 200. It was also a commercial hit. As of December 2015, it had sold 350,000 copies in the US alone.
He collaborated with Jhené Aiko to work on a studio album ‘Twenty 88’ which released in April 2016. The album peaked at the fifth position on the US Billboard 200. It was a commercial success, and received mostly positive reviews.
In February 2017, Sean released his fourth album ‘I Decided’. It was a commercial success, peaking at the first position on the US Billboard 200, and received mostly positive reviews. 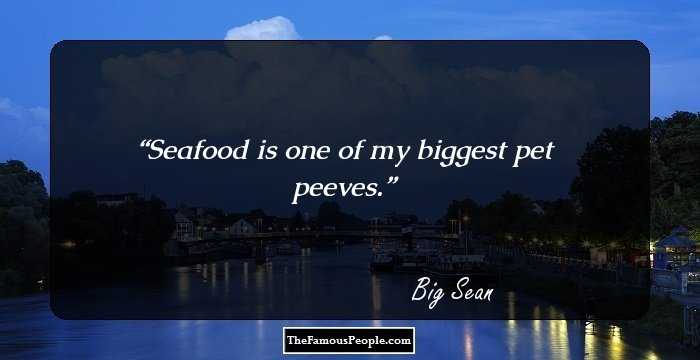 Major Works
Released in August 2013, the album ‘Hall of Fame’ is among Big Sean’s most significant works. The album, which included hit singles, such as ‘Fire’ and ‘Beware’, peaked at the third position on the US Billboard 200. It stood at number 10 on the Canadian Albums, and at number 56 on the UK Charts. It was a commercial success, selling 72,000 copies in the US within the first week. It received mostly positive reviews.
‘Dark Sky Paradise’, Sean’s third album and one among his most important works, was released in February 2015. With singles such as ‘Dark Sky’, ‘Blessings’ and ‘Play No Games’, the album was a huge hit, and peaked at number 1 on the US Billboard 200. It also did well in other countries, standing at number 28 at Australian Albums, number 29 at Danish Albums, number 23 at New Zealand Albums, and at number 30 at Norwegian Albums. The album was also a commercial success, and received positive reviews.
‘Twenty88’ a studio album, released in 2016, was a collaboration between Big Sean and songwriter Jhené Aiko. The album was a huge success, peaking at Number 5 on the Billboard 200. The album, which included singles, such as ‘On the Way’, ‘Selfish’, and Talk Show’, sold 40,000 copies within the first week of its release. It peaked at Number 82 on the Australian Albums, number 28 on the Canadian Albums, and number 69 on the UK Albums. Reviews were mostly positive.
Awards & Achievements
In his career so far, Big Sean has won a total of two ‘BET Awards’, six ‘BET Hip Hop Awards’, and one ‘MTV Video Music Award.’ He has also received three nominations for the ‘Billboard Music Awards’, and four for the ‘Grammy Awards’. 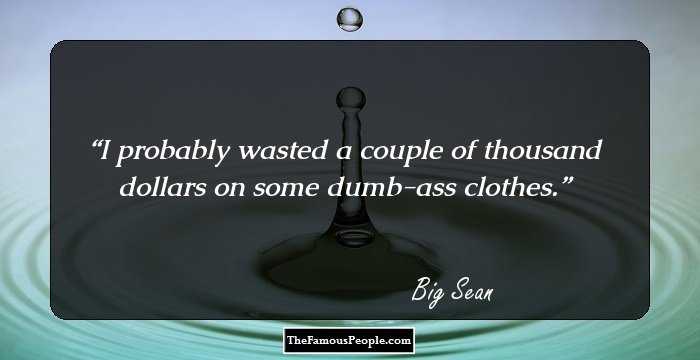 Quotes: I
Love Life
Big Sean once dated Ashley Marie, his sweetheart from high school. However, the couple had a break-up in early 2013.
After some time Sean began dating actress Naya Rivera. Their engagement was announced in October 2013. But the couple ended their relationship later on.

See the events in life of Big Sean in Chronological Order