Ben Stiller is an American comedian, actor, writer, director, producer, and musician. He is best known for playing ‘Larry Daley’ in Shawn Levy's ‘Night at the Museum’ trilogy. Ben is one of the few bankable actors who can pull off comic roles with ease. His movies have raked in over $2.6 billion in the United States and Canada, with an average of $79 million per movie. After starting his career as an actor, he went on to write several mockumentaries, before producing and hosting his own show titled ‘The Ben Stiller Show.’ He made his directorial debut in 1994 when he directed the romantic comedy-drama film ‘Reality Bites.’ Ben often impersonates performers, such as David Blaine, Bruce Springsteen, Tom Cruise, and Bono. He has cited comedians like Jimmie Walker, George Carlin, and Robert Klein as his inspiration. Over the years, Ben has received several prestigious awards, including an ‘Emmy Award’ for his sketch comedy TV series ‘The Ben Stiller Show.’ He is an active supporter of various charities like the ‘Elizabeth Glaser Pediatric AIDS Foundation.’ In 2018, UNHCR appointed him as its goodwill ambassador. American People
Actors
Comedians
Directors
T V & Movie Producers
Childhood & Early Life
Ben Stiller was born Benjamin Edward Meara Stiller on November 30, 1965, in New York City, USA, to veteran comedians and actors, Jerry Stiller and Anne Meara. He was inspired to pursue a career in acting by his parents.
His family followed Judaism and Irish Catholicism — the Stillers celebrated both Hanukkah and Christmas, and Ben had a Bar Mitzvah.
In the ‘70s, he was part of the New York City troupe ‘NYC's First All Children's Theater.’
In 1983, he graduated from ‘Calhoun School’ in New York and enrolled at UCLA. Around that time, he also performed as an opening act for the cabaret siren Jadin Wong. 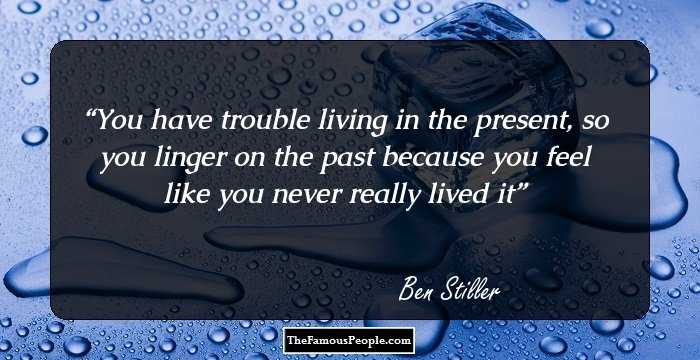 Quotes: You, Past, Never, Like, Living
Continue Reading Below
Career

Ben Stiller's minor role on the TV soap opera ‘Guiding Light’ led to him being cast in the ‘Tony’ award-winning 1986 Broadway revival of John Guare's play ‘The House of Blue Leaves.’ Around that time, he produced a satirical mockumentary on actor John Mahoney.

His 10-minute short titled ‘The Hustler of Money,’ a parody of Martin Scorsese’s ‘The Color of Money,’ caught the attention of ‘Saturday Night Live’ which aired it in 1987.

In 1987, he played a small part in Steven Spielberg's ‘Empire of the Sun.’

In 1989, he appeared on ‘Saturday Night Live’ as a featured performer, but left after four episodes. He came up with ‘Elvis Stories,’ a short film which inspired another film titled ‘Going Back to Brooklyn’ for MTV.

Starting from 1992, ‘Fox Network’ aired the 12-episode ‘Ben Stiller Show’ which failed to make a mark. However, it eventually received critical appreciation and won the ‘Emmy Outstanding Writing in a Variety or Music Program’ award.

In 1995, his parents joined him on-screen in ‘Heavyweights.’ The following year, he starred in Adam Sandler's ‘Happy Gilmore.’

Next, he played lead roles in ‘If Lucy Fell’ and ‘Flirting with Disaster.’

1998 was the year that catapulted him to superstardom. That year, he starred in films like ‘There’s Something About Mary,’ ‘Zero Effect,’ ‘Your Friends & Neighbors,’ and ‘Permanent Midnight’ which were all received well.

In 1999, Ben Stiller starred in three films: ‘Mystery Men,’ ‘Black and White,’ and ‘The Suburbans.’ The same year, he directed a spoof TV series titled ‘Heat Vision and Jack’ which was canceled as it was not picked up by ‘Fox.’

He starred in three films in 2000: ‘Meet the Parents,’ ‘Keeping the Faith,’ and ‘The Independent.’ Later that year, he developed ‘Mission: Improbable,’ a spoof of ‘Mission: Impossible II’ and other films for MTV.

In 2001, he directed ‘Zoolander’ which was initially developed as a short skit for ‘VH1 Fashion Awards’ five years earlier. It featured multiple celebrity cameos.

Over the next two years, he appeared in ‘Duplex,’ ‘Orange County,’ ‘Nobody Knows Anything!,’ and ‘The King Of Queens.’

From 2003 to 2004, he appeared in six blockbusters: ‘Starsky & Hutch,’ ‘Envy,’ ‘DodgeBall: A True Underdog Story,’ ‘Anchorman: The Legend of Ron Burgundy,’ ‘Along Came Polly,’ and ‘Meet the Fockers,’ all of which saw commercial and critical success.

‘Madagascar,’ which released in 2005, was his first attempt at a computer-animated film. The movie grossed more than $532 million at the box office.

In 2006, Ben Stiller played cameo roles in ‘School for Scoundrels’ and ‘Tenacious D in The Pick of Destiny’; he was also an executive producer of the latter. In December that year, Stiller played the lead role in ‘Night at the Museum.’

‘Heartbreak Kid,’ starring Malin Akerman, released in 2007. Although it was critically panned, it earned more than $100 million worldwide.

He co-wrote, co-produced, and directed ‘Tropic Thunder’ in 2008.

The following year, ‘Night at the Museum 2: Battle of the Smithsonian,’ a sequel to his 2006 movie, was released.

In 2011, Ben Stiller starred alongside Eddie Murphy and Alan Alda in ‘Tower Heist.’

2012 saw the release of the final movie in the ‘Madagascar’ franchise.

In 2017, he was seen in movies like ‘The Meyerowitz Stories’ and ‘Brad's Status.’ 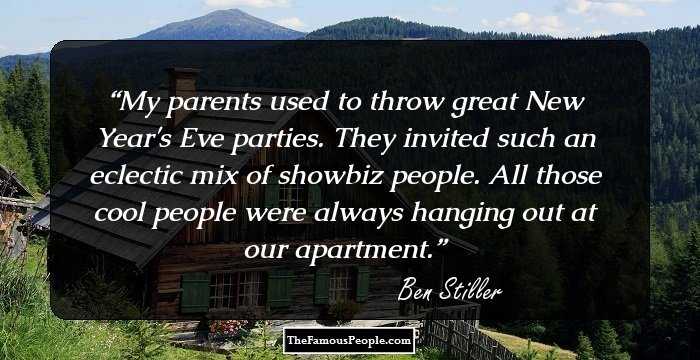 Major Works
He wrote, directed, and starred in ‘Reality Bites’ which debuted as the highest-grossing film in its opening weekend and received mixed reviews.
The Farrelly Brothers’ ‘There's Something About Mary’ turned his career around; this cult classic generated $370 million at the box office.
His role as male nurse ‘Gaylord Focker’ in ‘Meet the Parents’ received widespread acclaim. The movie, in which he appeared alongside Robert De Niro, grossed more than $330 million worldwide. The sequels ‘Meet the Fockers’ and ‘Little Fockers’ grossed over $516.6 million and $310 million, respectively.
Awards & Achievements
This comedian par excellence has been nominated 12 times for the ‘Teen Choice Award.’ He won the award under the ‘Choice Hissy Fit’ category for ‘Zoolander.’
He has received 13 ‘MTV Movie Award’ nominations. He has won the award for ‘Best Fight’ (There's Something About Mary), ‘Best Comedic Performance’ (Meet the Parents), and ‘Best Villain’ (DodgeBall: A True Underdog Story).
Princeton University's Class of 2005 inducted Stiller as an honorary member of the class during its Senior Week.
In 2007, he received the ‘Hasty Pudding Man of the Year’ award from ‘Harvard's Hasty Pudding Theatricals.’ He also received the ‘Wannabe Award’ at the ‘Kids' Choice Awards.’
Continue Reading Below
MTV conferred its top honor—‘The MTV Generation Award’—on this remarkable actor in 2009.
He is the recipient of the 2011 ‘Charlie Chaplin Britannia Award’ for ‘Excellence in Comedy.’ 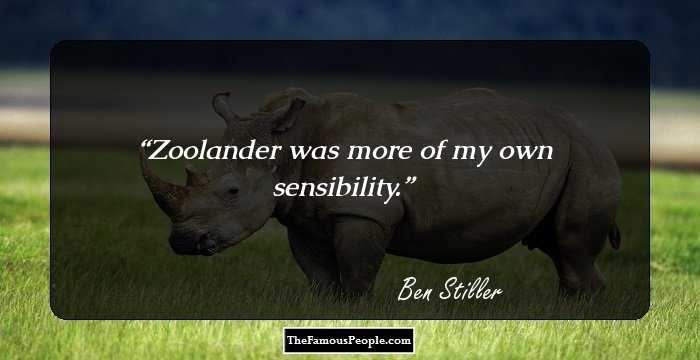 Personal Life & Legacy
During his early TV and film career, Stiller was romantically involved with several actresses, such as Jeanne Tripplehorn, Calista Flockhart, and Amanda Peet.
He married Christine Taylor in May 2000. The couple has two children - Ella Olivia and Quinlin Dempsey.
His wife, sister, and son have worked alongside him in movies, such as ‘Reality Bites,’ ‘Zoolander,’ ‘DodgeBall: A True Underdog Story,’ ‘Tropic Thunder,’ ‘Arrested Development,’ and ‘Madagascar: Escape 2 Africa.’
A democrat, Stiller has donated to the campaigns of John Kerry, Barack Obama, John Edwards, and Hillary Clinton.
He has also been involved with several charitable organizations, such as ‘Declare Yourself,’ ‘The Elizabeth Glaser Pediatric AIDS Foundation,’ and ‘Starlight Starbright Children's Foundation.’
In June 2014, Stiller was diagnosed with prostate cancer. After undergoing a surgery, he was declared cancer-free in September 2014.
Trivia
This actor-director regularly casts Jack Black, Will Ferrell, Vince Vaughn, Owen Wilson, Luke Wilson, and Steve Carell in the films that he produces and directs.
This well-known actor has appeared with Owen Wilson in 11 films.

Quotes By Ben Stiller | Quote Of The Day | Top 100 Quotes

See the events in life of Ben Stiller in Chronological Order 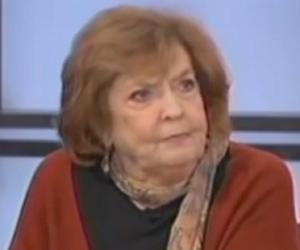