Advanced Search
Beatie Edney is an English actress who became very popular for her portrayal of Prudie Paynter on BBC's historical drama series 'Poldark' which ran from 2015-19. She initially came to limelight after playing Heather MacLeod on the 1986 fantasy action-adventure 'Highlander', and later its sequel 'Highlander: Endgame'. Her other significant films include 'A Day at the Beach', 'Mister Johnson', and 'In the Name of the Father'. On television, she acted in the mini-series 'Lost Empires', 'My Uncle Silas', 'Hard Times' and 'Messiah: The Harrowing', and had major roles in series like 'Dressing for Breakfast' and 'The Coroner'. She acted on stage in plays, such as 'Les Liaisons dangereuses', 'The Girlfriend Experience' and 'The Madness of King George III'. She drew a doodle for National Doodle Day to support the charity ‘Epilepsy Action’, which was later auctioned at ebay.com in March 2015. She also works with The Mayhew Animal Home to improve the lives of dogs. British People
Libra Actresses
British Actresses
Actresses Who Are In Their 60s
Women Film & Theater Personalities
Rise to Stardom
Beatie Edney began her career as a child actress, starring with Mark Burns in the 1970 drama film 'A Day at the Beach'. Her next role was as an adult on the television series 'Time for Murder' in 1985. The following year, she drew the attention of the audience in her role as Heather MacLeod in the film 'Highlander', a role which she would reprise in 'Highlander: Endgame' in 2000. She played the lead role of Nancy Ellis in the 1986 mini-series 'Lost Empires', also starring Colin Firth. In 1987, she portrayed Cecile Volanges in a theatre production of the French epistolary novel 'Les Liaisons dangereuses'.
She acted alongside Pierce Brosnan and Edward Woodward in the film 'Mister Johnson' by Bruce Beresford in 1990. The same year, she appeared on the episode 'The Mysterious Affair at Styles' in the mystery drama series 'Agatha Christie's Poirot'. She played Louisa Gradgrind in the 1994 television adaptation of Charles Dickens' 'Hard Times'. Next year, she bagged the starring role of Louise in the Channel 4 sitcom 'Dressing for Breakfast'. She starred in a 2008 production of 'The Girlfriend Experience' at the Jerwood Theatre and played Queen Charlotte in 'The Madness of King George III' at the Apollo Theatre in 2012. In 2015, she began appearing as Prudie Paynter on the drama series 'Poldark' and as Judith Kennedy on the daytime series 'The Coroner'.
Recommended Lists:

British Film & Theater Personalities
British Female Film & Theater Personalities
Libra Women
Continue Reading Below
Controversies & Scandals
On June 20, 2019, when asked by fans why she would not be attending the premiere of the new season of 'Poldark' in Cornwall, 56-year-old Beatie Edney, who plays the loyal housekeeper Prudie Paynter, told her fans on Twitter that she did not receive an invite from BBC One for the event. She further accused the broadcasting network of 'ageism', claiming that she was snubbed because of her age. In the now-deleted tweet, she stated that even though "mainly middle-aged women are the audience for the show we struggle to be represented in the media". In response, a spokesperson for BBC told the media that they were surprised because they "did invite Beatie and were told she couldn't attend". Soon after, Beatie apologized and backtracked on her claim saying that there was a "mix-up" due to which she got the invite too late to attend the event. The fiasco served as a reminder that back in 2011, BBC was accused of ageism by a tribunal after it was revealed that the network had told 'Countryfile' presenter Miriam O'Reilly to be "careful about those wrinkles" before she and three other middle-aged women were replaced by younger performers. Beatie had previously mentioned that she considered herself fortunate to be offered roles as it is very difficult for actresses over 40.
Family & Personal Life
Beatrice 'Beatie' Edney was born on October 23, 1962, in London, England, to Sylvia Syms and Alan Edney. Her mother is a former screen actress who had earned fame at a very young age. Her mother, who had a still born child and a daughter named Jessica who lived for two days, had adopted a baby boy named Benjamin shortly before Beatie was conceived. Her parents, who were teenage sweethearts, divorced in 1989 after her father confessed to having an affair with a colleague, as well as a two-year-old daughter from the relationship. Her parents briefly reconciled before her father died in 2013 after suffering a stroke following a heart operation. Her brother is a teacher in Bangkok. Musicians Nick and Alex Webb are her cousins.
Beatie Edney, who never wanted to marry, has mentioned that she respects the region in China where there are no marriages and the society is matriarchal. She is very fond of scuba diving. 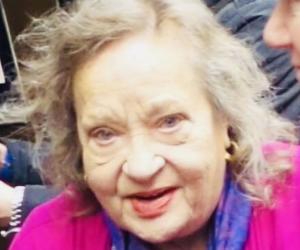