Advanced Search
Sylvia Syms is an English actress, best known for portraying ‘Margaret Thatcher’ in 'Thatcher: The Final Days,' a role that she later relived on stage as well. A 'The Royal Academy of Dramatic Art' alumna, she stepped into the entertainment industry after a lot of work in the theatre circuit. Sylvia was a prominent repertory player when she was noticed by the British actor Anna Neagle and her director-husband, Herbert Wilcox. Herbert later cast her in his film, which marked her debut. Over time, Sylvia delivered several remarkable performances on-screen and earned three 'British Film Academy Awards' nominations. Sylvia’s success in films and television did not let her sideline her first love and true passion - theatre. She has quite a number of stage credits to her name. Sylvia has worked with several stars, such as Dirk Bogarde, Marius Goring, Hardy Krüger, Herbert Lom, Cliff Richard, Jenny Agutter, Sophia Loren, George Peppard, Roger Moore, Ray Milland, Bernard Miles, and Richard Todd. 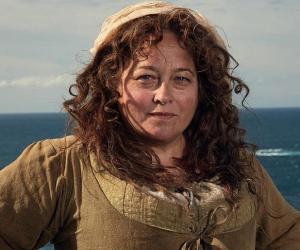 British People
Royal Academy Of Dramatic Art
British Actresses
Capricorn Actresses
Actresses Who Are In Their 80s
Childhood & Early Life
Sylvia was born Sylvia May Laura Syms, on January 06, 1934 in Woolwich, London, England, to Daisy and Edwin Syms. Her father was a trade unionist and civil servant. Her family later moved to Well Hall, Eltham, where Sylvia grew up.
Sylvia attended 'The Royal Academy of Dramatic Art' in London and later served the RADA Council.
Continue Reading Below
Career
Sylvia began her acting career in 1953 with Henrik Ibsen's play, 'A Doll's House,' staged at the 'Lyric Theatre' in Hammersmith, London. Two years later, she performed in Owen Holder's play, 'A Kind of Folly,' at the 'Duchess Theatre' in London.
Sylvia made her film debut as the troubled teenage daughter Janet Carr in the 1956 British film 'My Teenage Daughter' (later 'Teenage Bad Girl'). She played the onscreen wife of Tony Britton in 'The Birthday Present' (1957).
Sylvia had starring roles in films such as 'Woman in a Dressing Gown' as Georgie Harlow, 'No Time for Tears' as nurse Margaret Collier, 'Flame in the Streets' Kathie Palmer, and 'The Punch and Judy Man' as Delia Pinner.
Irish poet and playwright Brendan Behan cast Sylvia in his first play 'The Quare Fellow' that premiered at the 'Pike Theatre Club,' Herbert Lane, Dublin, on 19 November 1954 and was a huge success.
Sylvia played nurses in the 1958 British swashbuckler 'The Moonraker' as Anne Wyndham and 1958 released 'Ice Cold in Alex' as Diana Murdoch. She had lead roles as Hetty in 1959 British crime thriller 'No Trees in the Street,' Sister Mitya in 1960 British Second World War film 'Conspiracy of Hearts,' Laura in 1961 suspense 'Victim,' and club hostess Billa in 1963 drama 'The World Ten Times Over.'
Sylvia was cast to play an attractive teacher named Liz Ferrers in the 1959 British melodrama-adventure film 'Ferry to Hong Kong.' She was seen as Clelia, the leader of a woman- warrior group in the 1961 peplum film 'Amazons of Rome.' That year, she performed in Richard B. Sheridan's play, 'The Rivals,' at the 'Pembroke Theatre' in Croydon, Surrey.
Sylvia starred as British governess, Margret Woodville in the 1964 British adventure drama 'East of Sudan.' She portrayed Constance Babington Smith MBE Legion of Merit FRSL who was a journalist and writer, best known for her imagery intelligence works in the 1965 spy thriller and Second World War Metrocolor movie 'Operation Crossbow' (later 'The Great Spy Mission').
In 1964, Sylvia appeared as ‘Lady Anne Yearley’ in the 'ITV' mystery drama 'The Saint' and subsequently made a bunch of single-episode appearances. She played the mother of her real-life son Benjamin Edney in the 1969 ‘Technicolor’ Western 'The Desperados.'
Sylvia appeared as Ruth in the plot 'Frozen Fear' from the 1972 British horror film 'Asylum.' She earned a 'British Film Academy Award' nomination for her performance as Margaret Stephenson in the 1974 romantic drama 'The Tamarind Seed.' Sylvia was the lead Wendy in the 1978 British crime film 'Give Us Tomorrow.'
Continue Reading Below
From 1972 to 1974, Sylvia and Leslie Crowther played the onscreen married couple in the comedy series 'My Good Woman.' In 1975, she became the jury-head at the '25th Berlin International Film Festival.' Sylvia performed in Oscar Wilde's play, 'An Ideal Husband,' staged at the 'Churchill Theatre' in Bromley, Kent, in 1978.
Sylvia also made appearances in the plays ‘The Entertainer’ (1986) by John Osborne and ‘Canaries Sometimes Sing’ (1987) by Frederick Lonsdale.
Sylvia got her breakthrough television role soon after British Prime Minister Margaret Thatcher ended her period of office in 1990. Sylvia portrayed her in the 'ITV' film 'Thatcher: The Final Days' (1991). She reprised the role later on the stage as well.
In 1992, Sylvia performed in Noel Coward's play, 'Post Mortem,' at the 'King's Head Theatre' in London, and then in 1993, she was heard as Mrs. Hubbard in the 'BBC Radio' production of Agatha Christie's 'Murder on the Orient Express.' Sylvia was one of the lead characters as Alice Angelo in the 1997 British historical drama film 'The House of Angelo.'
Sylvia’s other stage credits include Richard Norton Taylor and John McGrath stage adaptation of 'Half The Picture: The Scott 'Arms to Iraq' Inquiry’ and Ray Cooney's play, 'Funny Money.' From 2000 to 2003, she was seen as Marion Riley in the 'ITV' comedy 'At Home with the Braithwaites.'
Sylvia contributed to the 'Sonnet 142' for the compilation album 'When Love Speaks' (2002). She portrayed Queen Elizabeth, The Queen Mother in the biographical drama 'The Queen' (2006). In 2010, she guest-starred in the 'BBC1' drama series 'Casualty.' previously, in 2007, she played a different character in an episode from the show. Sylvia also appeared in the medical drama 'Holby City' in 2003, which is the sister-series of Casualty.
Since 2007 (till 2010), Sylvia had a recurring role as dressmaker Olive Woodhouse in the 'BBC One' soap opera 'EastEnders.' She played Joan in the 'BBC Two' original sitcom 'Rev.' Sylvia made a cameo in the 2012 film 'Run for Your Wife.' She was cast as Mrs. Nicholls in the 2012 comedy film 'Booked Out.'
Sylvia was honored with the coveted O.B.E. (Officer of the Order of the British Empire) title in 2007 for her contributions in the field of entertainment.
Family & Personal Life
Sylvia was married to Alan Edney from 1956 until their divorce in 1989. They have a daughter, Beatie Edney, who is also an actress; and a son, Benjamin Edney. Sylvia is the aunt of musicians Nick and Alex Webb.
Trivia
Even though Sylvia has portrayed Margaret Thatcher for a long time, she is, in real-life is a staunch supporter of the 'Labour Party.'
Sylvia was offered a cameo part in the series 'Doctor Who: The Curse Of Fenric.'
Sylvia played Helen Mirren’s mother in 'The Queen' (2006), even though they are just 11 years apart.
She replaced Billie Whitelaw in the 1963 British comedy film 'The Punch and Judy Man,' that also featured her nephew, Nick Webb.

See the events in life of Sylvia Syms in Chronological Order