George Herman Ruth, Jr., better known as Babe Ruth, was a professional baseball player credited to have changed the game itself. A highly talented player he enjoyed a long and productive career that lasted for 22 seasons from 1914 through 1935. He was one of the most prolific hitters in the history of the game and had set such lofty career records that it took years for them to be surpassed. One of the best players to have ever graced the game, he made baseball very popular during the era he played in; he was the reigning star of the world of sports during the 1920s. Even as a student Ruth had a natural talent for playing baseball and his skills were recognized by a monk at his school who invited Jack Dunn, the owner of the Baltimore Orioles to watch the boy play. Impressed, Dunn became the boy’s mentor and guardian and had him sign a professional contract. Thus began the legendary journey of this great player and there was no looking back—Ruth would go on to become one of the most admired and respected sportsperson not just in America but also in the whole world. He was among the first five players to be inducted into the National Baseball Hall of Fame. Also Known As: George Herman Ruth, The Bambino, The Sultan of Swat

American Celebrities
American Men
Tall Celebrities
Tall Male Celebrities
Male Sportspersons
Childhood & Early Life
Ruth was one of the eight children born to George Ruth, Sr., and Katherine. Six of his siblings died in infancy and he had only one surviving sister.
His parents noticed that he was becoming unruly as a youngster and sent him to St. Mary’s Industrial School for Boys which was run by Catholic monks. The school was known for its strict order and discipline.
He learnt vocational skills like shirt making and carpentry at the school. During this time he also discovered his talent for playing baseball.
Brother Matthias, one of the monks at the school noticed the boy’s love for baseball and helped him develop his hitting, fielding and pitching skills.
The Brother invited Jack Dunn, the owner of the Baltimore Orioles to come and watch Ruth play. Impressed by the boy’s game Dunn had him sign a contract with the team in 1914.
Ruth was only 19 at that time and required a guardian to complete the contract. Dunn became his legal guardian and Ruth soon acquired the nickname ‘Jack’s newest babe’, and was from then known as Babe Ruth. 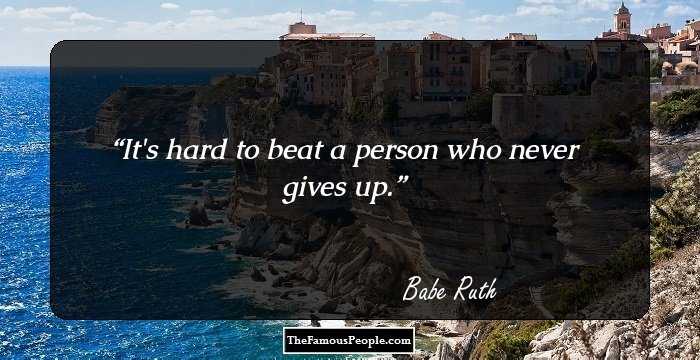 Quotes: Never
Continue Reading Below
Career
Babe played his first professional game on 7 March, 1914. He pitched the last two innings of the 15-9 victory in the intersquad game.
He played an exhibition match against major-league Brooklyn Dodgers in April 1914 in which he took part in a bases loaded 1-2-3 double play. His team won the match.
He became a star pitcher and his team played very well. The Orioles became the top team by June 1914 and had won over two-thirds of their games.
In spite of the team’s great performance, Dunn began to suffer losses and had no option other than to sell off his best players to major-league teams. Babe was sold to Boston Red Sox.
He hit his first career home run in 1915 in a match against the New York Yankees. He finished the season with a win-loss record of 18-8 with a 2.44 earned run average. The Red Sox won 101 matches that year.
In 1916, he was unusually successful against Washington Senators star pitcher Walter Johnson and beat him by scores of 5-1, 1-0, 1-0 in 13 innings.
He mostly played as an outfielder in 1918 and pitched in 20 games. He made a 13-7 record with a 2.22 ERA.
Babe was sold to the New York Yankees in 1919 and in 1920 he hit 54 home runs and batted 376. He posted a record of .847 slugging average that would not be broken for several decades to come.
The year 1921 was the most productive year of his career when he hit 59 home runs, batting.378 and slugging .846. The very same year he led the Yankees to their first league championship.
Continue Reading Below
Ruth was very optimistic about playing in the 1921 World Series. However he could not play many of the games because of an injury.
He became the Yankees’ new on-field captain in 1922 but was soon stripped of the captaincy when he threw dirt on an umpire. During the season he played in 110 games with 35 home runs; it was a disappointing season for him.
The 1923 season was better and he finished the season with a career high batting average of .393 and 41 home runs. He led the Yankees to their first World Series title with his brilliant performance.
He had a very successful career all through the 1920s and led the Yankees to a spectacular win over St. Louis Cardinals in the 1928 World Series by hitting .625.
His career had begun to decline by the 1930s. Even though still productive on the field, his performance had paled considerably in comparison to his earlier days. He retired in 1935. 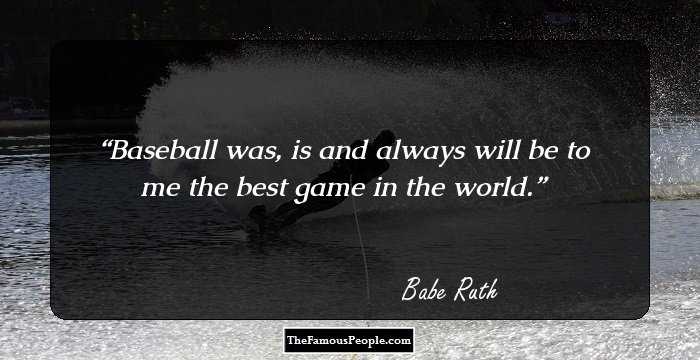 Quotes: Me, Will
Awards & Achievements
Babe Ruth was a highly prolific baseball player who created history with his career records for home runs (714), slugging (.690), runs batted in (2213) and bases on balls (2062)—many of which were broken only decades after his retirement.
He led his teams to seven World Series championships over his long and productive career.
This famous baseball player the American League home run champion 12 times in his career.
Personal Life & Legacy
Babe married Helen Woodford in 1914. They adopted one daughter. The couple separated later on because of his infidelities.
He married actress Claire Merritt Hodgson in 1928 and adopted her daughter as his own.
He was diagnosed with inoperable cancer in 1946 and died in his sleep in 1948.
The New York chapter of the Baseball Writers Association of America created the Babe Ruth Award for best performance in the World Series by a Major-League Baseball player. The first of these awards was given in 1949. 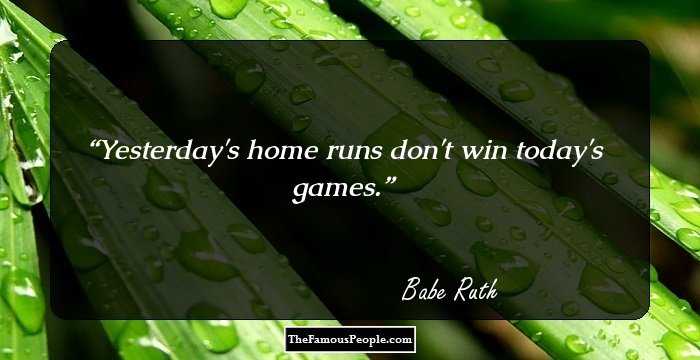 See the events in life of Babe Ruth in Chronological Order