Alexander Emmanuel ‘Alex’ Rodriguez, famously known as ‘A-Rod,’ is an American former professional baseball infielder who played in ‘Major League Baseball’ (MLB), primarily for the ‘New York Yankees.’ Before playing for ‘Yankees,’ he played for ‘Seattle Mariners’ and ‘Texas Rangers.’ He became involved with baseball from a very young age and is considered one of the best baseball players that American baseball has ever seen. With his record-breaking 500 home runs, Rodriguez has put his name at the top of all-time leaders in home runs list. During his time as a player, he took himself and his team to places that ‘Major League Baseball’ was not prepared to deal with, becoming a powerful phenomenon in baseball. His career was packed with awards, record-breaking achievements, and accolades but was also clouded with controversies. He was accused of using performance enhancing drugs, cocaine, and was also criticized for getting involved with underground poker games. He also made headlines for his illicit sexual affairs with women, prostitutes, and exotic dancers. He was banned from playing the game for the 2013 and 2014 seasons for his involvement in the ‘Biogenesis Scandal.’ After his retirement as a player, Rodriguez started serving as a broadcaster for ‘Fox Sports 1.’ He also became a member of the 'ABC News' network and was cast in the American business reality television series ‘Shark Tank.’ Mike Trout
27th July In History
DID WE MISS SOMEONE?
CLICK HERE AND TELL US
WE'LL MAKE SURE
THEY'RE HERE A.S.A.P
Quick Facts

American People
Tall Celebrities
Tall Male Celebrities
Male Sportspersons
American Sportspersons
Childhood & Early Life
Alex Rodriguez was born on July 27, 1975, in New York City, to Victor Rodriguez and Lourdes Navarro, who were Dominican immigrants. The family owned a shoe store and lived behind that store. They move to Miami and settled there when Rodriguez was around 4 years old. He was raised alongside his two half-siblings, Joe and Suzy, from his mother's first marriage.
Rodriguez loved playing baseball and when his father left the family to live in New York, baseball became his sole solace. He attended the ‘Christopher Columbus High School’ and ‘Westminster Christian School.’
He was chosen as the ‘USA Baseball Junior Player of the Year’ and as Gatorade's ‘national baseball student-athlete of the year.’
At the age of 17, he turned down University of Miami's baseball scholarship and instead signed with the ‘Seattle Mariners’ and became their number one overall pick of the amateur draft in 1993. He signed a three-year contract worth 1.3 million US dollars and a $1 million signing bonus. 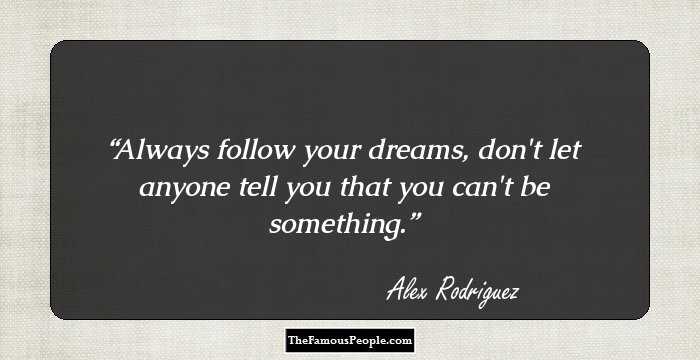 Alex Rodriguez made his debut appearance with ‘Seattle Mariners’ at the age of 18 in 1994, playing shortstop in a game against the ‘Red Sox’ at Fenway. The following year, he hit his first home run against ‘Kansas City’ at Kingdome.

In 1995, he was assigned to Seattle's ‘Triple-A’ club and was made the starting shortstop of the team. He was featured in the cover of ‘Sports Illustrated’ with a headline reading, ‘Short Story: Jeter and Rodriguez head up the finest group of short sports since WWII.’

In 1997, he was named as the ‘Major League Player of the Year’ by the ‘Sporting News’ and ‘Associated Press.’ He almost became the ‘Youngest Most Valuable Player’ in the baseball history that year, but lost the title to Juan Gonzalez.

In 1998, Alex Rodriguez was selected as ‘Players Choice AL Player of the Year’ and won his second ‘Silver Slugger Award.’ In 1999, he had 42 home runs, 111 runs batted in (RBI), and an average of .310. The following year, he was named the ‘Major League Player of the Year’ by ‘Baseball America.’

He signed with ‘Texas Rangers’ in 2001. The contract was worth 252 million US dollars, the most lucrative sports contract ever in the history. ‘Rangers’ pounded ‘White Sox’ 16-6, and Rodriguez made his 200th and 201st home runs.

In 2003, he became the youngest player to hit 300 home runs and won ‘Babe Ruth Home Run Award.’ ‘Texas Rangers’ wanted to move him and his contract out and made him available for the trade. He tested positive for performance enhancing steroids.

During Game 6 of the ‘ALCS’ with ‘Boston Red Sox’ in 2004, Rodriguez swatted at ‘Red Sox’ pitcher Bronson Arroyo's glove, knocking the ball loose. He was called for interference and ruled out. ‘Yankees’ lost the game.

In 2005, Alex Rodriguez hit .321, leading the ‘American League’ with 124 runs and 48 HR and became the first ‘Yankee’ player to win the American League home run title since Reggie Jackson in 1980. Also, he was the fifth player to win an ‘MVP’ award.

Rodriguez was an ‘All-Star’ in 2006, and was fourth in the league in RBIs and eighth in home runs. He had at least 35 home runs, 100 runs, and 100 RBIs from nine consecutive seasons.

In 2007, Rodriguez hit his 500th career home run. He was the first and only player in ‘MLB’ history to ever hit 500 home runs, playing for three different teams. He won the ‘Players Choice Award’ for ‘Outstanding AL Player.’

From 2008 to 2009, Alex Rodriguez hit two home runs in the sixth inning that drove in seven runs, setting an ‘American League’ record for most RBIs. It was the 12th consecutive season of him scoring 30 home runs and 100 RBIs.

In 2011, Rodriguez underwent arthroscopic surgery on his knee to repair a torn meniscus and was placed on the disabled list. He also faced allegations of being involved in the underground poker games, in which cocaine was explicitly used.

Alex Rodriguez suffered an injury during a game against ‘Seattle’ in 2012. It was a non-displaced fracture; therefore he was on the disabled list again. But before getting injured, he became the fifth player to record 2,000 career strikeouts in ‘MLB’ history.

In 2013, he underwent a hip surgery. He was also suspected to be involved in the ‘Biogenesis baseball scandal.’ In addition to this, he was also questioned for having used performance enhancing drugs.

Alex Rodriguez made his 2013 appearance for the ‘Yankees’ in August and on the same day, ‘MLB’ announced that he would be banned from the remainder of the 2013 season and the entire 2014 season for his role in the ‘Biogenesis scandal.’

On February 17, 2015, Rodriguez issued a hand-written letter of apology to ‘Major League Baseball,’ the ‘Yankees,’ the Steinbrenner family, the ‘Players Association,’ and the fans.

Rodriguez played his first game after the suspension on the opening day against the ‘Blue Jays’ at ‘Yankee Stadium.’

Rodriguez's spokesman said that he would not play for any other team in the coming year, and would remain a ‘special advisor’ to the ‘Yankees’ owner, Hal Steinbrenner.

On August 12, 2016, Alex Rodriguez played his final game for the ‘Yankees’ against the ‘Rays’. Thereafter, Rodriguez announced that he would not play for any other team in the coming year, and would remain a ‘special advisor’ to the ‘Yankees’ owner, Hal Steinbrenner.

In 2017, Alex Rodriguez became a guest judge on the American business reality television series Shark Tank. In the same year, he joined ABC News network and served as a contributor to ABC World News Tonight, Good Morning America, and Nightline.

In 2018, he joined ESPN as one of the analysts of the Saturday Night Baseball. In the same year, he became host of the CNBC show Back in the Game.

In July 2020, Alex Rodriguez became one of the members of the judging panel for the Forbes' Next 1000 list.

Alex Rodriguez was married to Cynthia Scrutis, a psychology graduate, from 2002 to 2008. They had two daughters together – Natasha and Ella. Cynthia took divorce from him on the grounds of marital misconduct, extra-marital affairs, and emotional abandonment. Rodriguez is said to have dated several celebrities, including Cameron Diaz and Kate Hudson.

His former wife Cynthia accused him of having an affair with pop queen Madonna, whom he called his 'soul mate' in an interview.

He owns a Mercedes-Benz dealership in Texas.

His nephew Joe Dunand is a professional baseball player.

He is an investor for eSports team ‘NRG Esports'.

See the events in life of Alex Rodriguez in Chronological Order