Derek Jeter is a legendary baseball player who has played 19 seasons with the Major League Baseball. He has won the World Series five times and is a central figure in the history of this sport. Regarded as one of the most valuable players, Jeter is a greatly marketed athlete from around the world. In the past decade, he has been the leading scorer for his team - the New York Yankees. He is an accomplished professional and is an idol and a sensation among many nascent players. His career graph has been consistent throughout and he has contributed to the Yankees’ successes through all odds. With a .351 batting average, he is placed among the best in the United States of America and has earned a number of distinguished accolades and honours in his sporting career. One of the major career highlights of this sportsperson was during the World Series against the Braves. Since then, he has been solely instrumental in leading the Yankees’ to a number of World wins. Today, Derek Jeter is simply known as ‘The Captain’ for his never-say-die attitude and his unbeatable records. He is also the 23rd member of the 3,000 hits club and the fourth youngest player to reach this landmark. Josh Donaldson
Baseball Players #3
Sportspersons #129
DID WE MISS SOMEONE?
CLICK HERE AND TELL US
WE'LL MAKE SURE
THEY'RE HERE A.S.A.P
Quick Facts

American People
Baseball Players
Black Sportspersons
Black Baseball Players
American Men
Childhood & Early Life
Derek Sanderson Jeter was born to Sanderson Charles Jeter and Dorothy in Pequannock Township, New Jersey. His father was a substance abuse analyst and his mother was an accountant. He is of Irish, African-American and German descent. He also has a younger sister, Sharlee.
The family moved from New Jersey to Kalamazoo, Michigan. It was here he and became greatly inspired to pursue a career in baseball.
He studied at Kalamazoo Central High School and was selected for the baseball and basketball teams. In his junior year, he had a batting average of .508 and in his sophomore year, he had an average of .557. By the time he was in his senior year, he had a batting average of .508.
Ever since his school days, he was a promising player and was recognized for his efforts with a number of awards.
The University of Michigan noticed his talent and offered him a baseball scholarship to play for the Michigan Wolverines in his college baseball years. 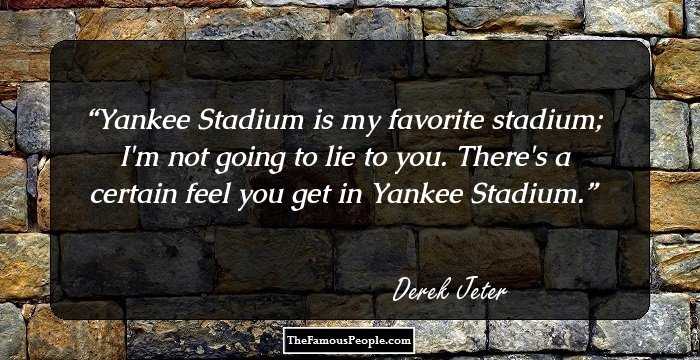 Who Is The Most Popular BTS Member?
Career
During an all-star camp, the Yankees scout spotted young Jeter and offered him to turn to professional baseball. After a series of speculations as to whether Jeter would attend college or choose to be part of the team, Jeter decided to turn professional. He was signed on by the Yankees for $800,000.
He played minor league baseball for four seasons, starting 1992. His initial seasons were a struggle with a batting average low at .202 in as many as 47 games.
He was then promoted to the Greensboro Hornets of the South Atlantic League in order to enhance his at-bats. With his scraggy build, he struggled in the first 11 games and made nine errors in 48 chances. His reputation as a future baseball player at this point of time was dwindling.
Through the next off-season, Jeter focused on getting better. He debuted as a professional baseball player in 1993, where he hit five home runs with .295, 18 stolen bases and 71 RBI. Finally, after much hard work, he was ranked as the ‘Most Outstanding Major League Prospect’ by the South Atlantic League managers.
He then went on to play for the ‘Tampa Yankees’, the ‘Albany-Colonie Yankees’ and the ‘Columbus Clippers’, during the 1994 season. He made it to the top with 68 RBI, 50 stolen bases and an average of .344. He was named one of the ‘Most Valuable Players of the FSL’, during this time.
In the 1995 season, he was heavily marketed as the ‘starting shortstop’ by the Yankees and was then promoted to Class AAA. The same year, he made his Major League Baseball debut on May 29th. The next day, he scored two key league hits and also his first career runs.
In 1996, he was made the Opening Day recruit shortstop since Tom Tresh, by the Yankees. He hit his first Major League home run in the fifth inning of a 7-1 Yankees triumph. He finished his conscript season with .314 average and 14 stolen bases.
During the same rookie season, he established the ‘Turn 2 Foundation’ to sponsor healthy lifestyle among young adults and helping them turn away from ‘drugs’ and ‘alcohol’.
1996 proved to be an extremely fruitful year for Jeter because he helped lead the Yankees to their first World Series title since 1978. He was instrumental in the win with his .361 batting average.
Continue Reading Below
Before the 1997 season commenced, the Yankees signed a contract of $540,000 with Jeter along with bonuses. He became the Yankees’ lead batsman and during the 1997 American League Division series, although he was at his peak, the Yankees lost to the Cleveland Indians, 3-2.
For the 1998 season, he was selected for his first ‘All-Star’ Game and earned a total of $750,000. He batted an average of .324 in the league’s regular season and batted .353 in the World Series, defeating the ‘Diego Padres’ in four games.
From 1999 to 2002, he appeared in his second ‘All-Star’ game and went on to defeat the Braves with an average of .353 in the World Series, Jeter’s third win in the series. Around the same time, he also signed a one-year deal with the Yankees for a monstrous $10 million.
After playing the Division Series, the ‘All-Star’ series, the Championship series and the World Series, he soon became entitled for ‘free agency’. However, he decided to stay on with the Yankees and signed a contract worth $189 million. He became the second-highest-paid athlete across team sports, after Rodriguez.
Following the September 11 attacks, he played his seventh full season in the Majors in 2002. He became the fourth player in Major League history to score 100 runs in his first seven full seasons. The following year, he was made the skipper of the New York Yankees.
In 2003, after being named the captain, he batted .324 at the ALDS series and then against the Red Sox in the ALCS series. Although his batting average improved and it became .314 at the end of the season, the Yankees ended up losing to the Florida Marlins in the World Series.
In 2004, he had an all-time career high with 44 doubles, helping the Yankees earn their 10th emergence in the post-season. The Yankees won 101 games that season. For the next season, he was placed second in the American League and won another division title that season.
He participated in the first ever ‘World Baseball Classic’ for Team USA, before the 2006 season.
Though the 2008 season was a disappointment for the Yankees, Jeter had managed to accomplish a number of significant milestones, one of which was when he became the third youngest player ever to collect his 2,500th hit. From 1999 to 2008, Jeter collected almost 1,947 hits in total, the most when he played for the Majors.
Continue Reading Below
2009 once again proved to be an eventful year for Jeter, when he led the Yankees back to the top. The Yankees had a swift win at the ALDS and went on to defeat the Angels and Phillies, to bring the Yankees its 27th World Championship. After this brilliant season, Jeter started to win a number of awards.
From 2010 to 2012, he achieved a number of milestones. He was elected into the AL All-Star league for the fifth consecutive season and also earned his 2,874th hit in the Major’s list. In 2011, he was made a member of the prestigious 3,000-hits club and became the fourth-youngest player to achieve this. 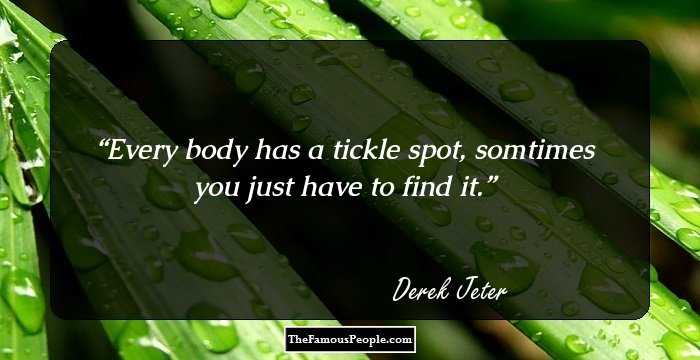 Quotes: You
Awards & Achievements
In 1992, he achieved his first honour, the ‘Gatorade High School Athlete of the Year’.
He was honoured with Baseball America’s ‘Minor League Player of the Year’, in 1994.
He won the ‘World Series Most Valuable Player’ Award, in 2000.
He was named New York Yankees ‘Player of the Year’ in 1998, 1999, 2000, 2006 and 2009.
He won the distinguished Golden Gove Award in 2004, 2005, 2006, 2009 and 2010.
He won the Silver Slugger Award in 2006, 2007, 2008, 2009 and 2012.
Continue Reading Below
He won the Hank Aaron Award in 2006 and 2009, respectively.
He was inducted in the Kalamazoo Central High School Athletic Hall of Fame, in 2007.
He was present the Lou Gehrig Memorial Award in 2010 and 2011, consecutively.
He was honoured by being chosen for the American League, ‘All-Star’ group 13 times from 1998 to 2012.
Personal Life & Legacy
Jeter’s personal life has always been in the prying eyes of the media ever since he achieved sports stardom. He has dated Mariah Carey, Lara Dutta, Joy Enriquez, Jordana Brewster, Vanessa Minnillo, Jessica Biel and Minka Kelly.
He is the ambassador of a sports website for children called ‘Weplay’ and actively advocates a healthy lifestyle through the foundation he established in 1996 called, ‘Turn 2 Foundation’.
He has endorsed a number of brands including Nike, Fleet Bank, Ford, Visa, Skippy and Gillette.
Apart from his baseball career, he has also appeared on episodes of ‘Seinfeld’, ‘Saturday Night Live’, ‘Anger Management’ and ‘The Other Guys’. 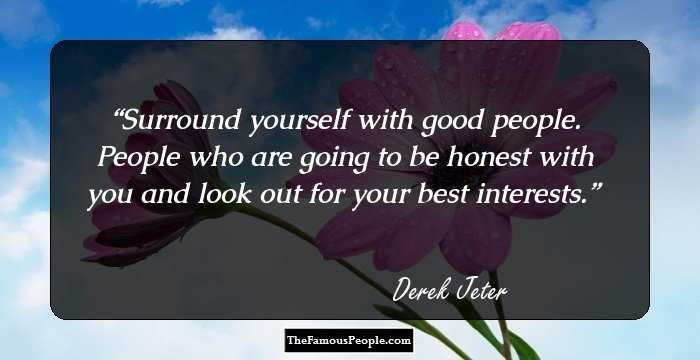 Quotes: You, Yourself
Trivia
This famous American baseball player, who plays for the New York Yankees, is considered the second-highest paid endorser in baseball after, Ichiro Suzuki.
You May Like

See the events in life of Derek Jeter in Chronological Order