Ayn Rand was a famous Russian-American novelist, philosopher, and screenwriter. She was born in Saint Petersburg in 1905, into an affluent Jewish family. As the ‘October Revolution’ set in, she moved with her family to Crimea and completed her schooling from there. Thereafter, she returned to Saint Petersburg and entered ‘Petrograd State University’ with history, philosophy, and literature as her subjects. During this period, she learned about the freedom guaranteed by the American constitution and also realized that she would never be allowed to write the kind of books that she wanted to write in Russia. Therefore, when the opportunity came, she left for America, never intending to return. In America, she learned English and watched Hollywood movies for six months before shifting to California to try her luck as a scriptwriter in the film industry. As a writer, she first made her mark with her 1943 book ‘The Fountainhead’ and then with ‘Atlas Shrugged.’ Having achieved success, she stopped writing fiction and concentrated on developing her theory of Objectivism. Her speeches and essays on this subject were later published as books; some during her lifetime and others after her death. Ayn Rand was born Alisa Zinovyevna Rosenbaum on February 2, 1905, in Saint Petersburg, Russian Empire. Her father Zinovy Zakharovich Rosenbaum was the owner of a pharmacy. Her mother’s name was Anna Borisovna (née Kaplan). Alisa was the eldest of her parents’ three daughters.

She did her initial schooling at the prestigious ‘Stoiunina Gymnasium’ and started writing from the age of eight. Although her parents tried to shield the girls from the political upheaval that was taking shape at that time, Alisa gradually developed her own views and favored a republican government over constitutional monarchy.

Therefore, when the ‘February Revolution’ erupted in Saint Petersburg in 1917, the 12-year-old Alisa favored Alexander Kerensky over Tsar Nicholas II. However, as the ‘October Revolution’ started later in the year, their family life was totally disrupted.

As the Bolsheviks seized power, her father’s business was confiscated and they had to flee to the Crimea, where they tried to start life afresh. Four years later, as Alisa graduated from high school at the age of 16, the family returned to Saint Petersburg, which was then renamed Petrograd.

By now, higher education was open to women. She seized this opportunity to enter the department of social pedagogy at the ‘Petrograd State University’ with history as her major in 1921. She also took up philosophy and literature as secondary subjects.

But shortly before she could finish her course, she was purged for being a bourgeois. Fortunately, she was re-admitted to the university after the intervention of some foreign scientists. She graduated in October 1924.

Subsequently, she entered the ‘State Institute for Cinema Arts’ to study screenwriting, graduating from there in 1925. Around this time, she also decided on her pseudonym, Ayn Rand.

By now, she had studied not only the works of various European writers, such as Victor Hugo and Walter Scott, but also the works of ancient scholars like Aristotle and Plato. In addition, she had also gone through the American history, which she found very inspiring.

Never an admirer of communism, she became enthusiastic about America's notion of individual freedom. Therefore, when she received an invitation from her relatives in America, she decided to move. Officially, her visit was to be brief; but she knew that she was leaving her homeland forever.

She left Russia on January 17, 1926. After several stops in different western European cities, Rand arrived in New York City on February 19, 1926 and was mesmerized by the Manhattan skyline.

She then traveled to Chicago and stayed with one of her relatives. Since she had already decided to remain permanently in the US and become a screenwriter, she spent the next six months learning English and watching movies to improve her language and develop ideas. 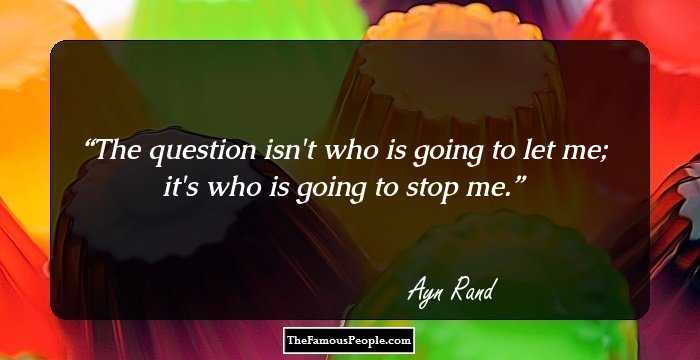 In the middle of 1926, Ayn Rand left for Hollywood, where she took up odd jobs to sustain herself. One day, as she was standing at the door of a studio, she spotted Cecil B. DeMille, one of Hollywood's leading directors, and just kept on staring at him.

Cecil also noticed her and asked her why she was staring at him. She told him that she was from Soviet Russia and had come here with the hope of becoming a screenwriter. Impressed, he appointed her as an extra in his on-going project ‘The King of Kings.’

Rand became a permanent US resident in July 1929 and an American citizen on March 3, 1931. Meanwhile, she began working first as a script reader and then as a junior scriptwriter for DeMille. Success eluded her and she kept on doing odd jobs to sustain her career as a scriptwriter.

Sometime now, she started writing her debut novel ‘We the Living.’ In 1931, while working as the head of the costume department at the ‘RKO Studio,’ she decided to take a break to write a screenplay.

Titled ‘Red Pawn,’ it was the first screenplay that she was able to sell. Although it was purchased by ‘Universal Pictures’ in 1932, it was never made into a film. Sometime after that, she quit working for ‘RKO Studio’ in order to finish her novel ‘We the Living.’

In 1933, as the money earned from the sale of ‘Red Pawn’ began to dwindle, she wrote a stage play titled ‘Night of January 16th.’ She was more successful this time. Produced by E.E. Clive, it opened in ‘Hollywood Playhouse’ on October 22, 1934.

Later, it was taken to Broadway by Al Woods, where it opened at the ‘Ambassador Theatre’ on September 16, 1935. It ran successfully for seven months before being taken off stage on April 4, 1936. Overall, it had 283 performances.

Meanwhile in 1934, she finished her semi-autobiographical novel ‘We the Living,’ but was unsuccessful in getting it published until 1936. The initial sale of the book was low. Hence, publisher Macmillan allowed it to run out of print in America; but it sold better in England.

Many critics believe that the book failed to make its mark mainly because the American intellectuals of the 1930s were sympathetic to the communist ideology and found the book overbearingly anti-Soviet.

In 1937, while working on ‘The Fountainhead,’ she wrote a novella titled ‘Anthem,’ which was published in 1938. In 1940, she wrote the stage adaption for ‘We the Living’ and also joined a campaign for Republican presidential candidate Wendell Willkie. She also spent a lot of her time in organizing a conservative intellectual group.

By and by, the funds from her earlier publications ran out and so she was once again forced to take up freelance job of a script reader at different film studios. The book ‘The Fountainhead’ had been rejected by 12 publishers, but she didn’t lose hope.

In 1941, while working as a script reader at ‘Paramount Pictures,’ she was introduced to Editor Archibald Ogden at the ‘Bobbs-Merrill Company,’ who agreed to publish the book. It was finally published in May 1943 and got featured in the bestsellers’ list. Finally, Rand became not only famous, but also financially secure.

Also in 1943, Rand sold the film rights of ‘The Fountainheads’ to ‘Warner Brothers’ and also wrote its screenplay. Subsequently, she was hired by producer Hal Wallis as screenwriter as well as script-doctor.

In 1946, while working with Wallis, she began working on her masterpiece, ‘Atlas Shrugged.’ In spite of such busy schedule, she continued with her anti-communist campaign and appeared as a ‘friendly witness’ before the ‘United States House Un-American Activities Committee’ in 1947.

In 1951, she moved to New York and began to work full time on ‘Atlas Shrugged.’ Concurrently, she continued with her political activism and gathered a big circle of admirers around her.

The book ‘Atlas Shrugged’ was finally published in 1957. In spite of attracting many negative reviews, the book became a bestseller. After that, she did not write fiction anymore.

Throughout the 1960s and 1970s, Ayn Rand concentrated on developing her philosophy, which she termed ‘Objectivism.’ She wrote numerous essays and gave lectures at well-known universities on the subject, influencing many young people.

Later, these essays and lectures became the basis of her non-fiction works. In 1961, she published her first non-fiction book ‘For the New Intellectual.’ ‘Philosophy: Who Needs It,’ which was published in 1982, was her last book in this genre. 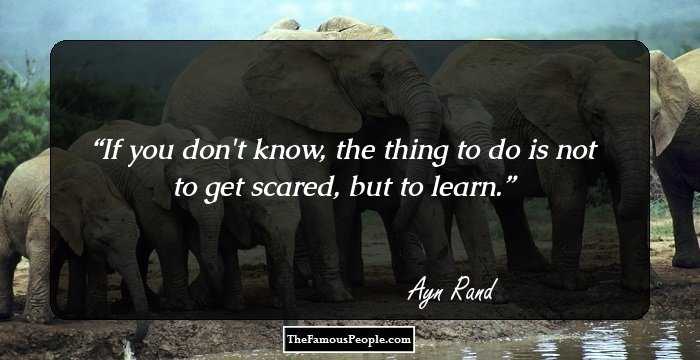 Many critics consider Rand’s 1957 novel ‘Atlas Shrugged’ to be her most important work. It is her longest novel and comprises romance, mystery, and even an element of science fiction. On top of that, it also provides a glimpse into Rand's philosophy of Objectivism.

Ayn Rand was twice inducted into the ‘Prometheus Award Hall of Fame.’ She became a co-inaugural inductee for her 1957 work ‘Atlas Shrugged’ and later in 1987 for ‘Anthem.’

In 1963, Rand received an honorary doctorate from ‘Lewis & Clark College.’ 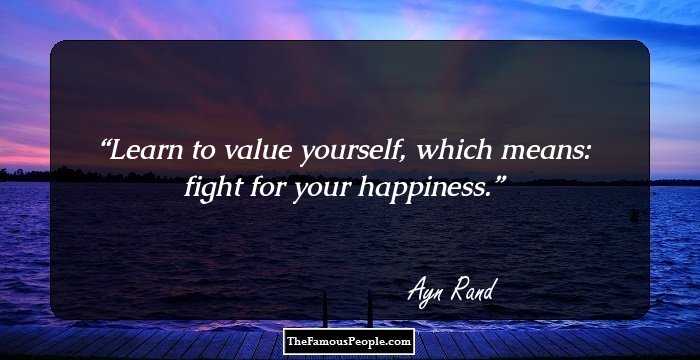 In 1927, Ayn Rand met Frank O'Connor, an aspiring actor, on the sets of ‘The King of Kings.’ They got married on April 15, 1929 and remained together till his death in 1979. The couple did not have any children.

Rand was a heavy smoker, as a result of which, she had lung cancer in the early-1970s. In 1974, she underwent an operation. Despite suffering from the disease, she remained an active lecturer till 1981.

She died of heart failure on March 6, 1982, at her home in New York City. However, her legacy still lives on. ‘The Ayn Rand Institute’ (ARI), a non-profit think-tank in Irvine, California, continues to promote her philosophy.

Apart from the books that were published in her lifetime, several other books, including ‘The Letters of Ayn Rand’ (1995) were published posthumously. These books continue to influence readers all around the world.

See the events in life of Ayn Rand in Chronological Order