Elizabeth Olsen is an American actress, best known for her role in the critically acclaimed film ‘Martha Marcy May Marlene’ for which she earned much appreciation. She is also known for her role in films like ‘Silent House’ and ‘Godzilla.’ She is the younger sister of actresses Mary-Kate and Ashley Olsen and was introduced to the show business at an early age. She began acting when she was very young, with appearances in her sisters' films. Sensing her talent, her parents also had her enrolled for ballet and singing lessons. Growing up, there was no doubt in her mind that she was destined to be a performer. After completing high school, she enrolled at the ‘New York University Tisch School of the Arts’ to hone her skills. She also spent a semester studying at the ‘Moscow Art Theatre School’ in Russia. Being an ambitious young woman, she appeared in several movies even before graduating from ‘Tisch.’ Pretty, confident, and talented, Olsen successfully made the transition from being a child star to an adult actress. Her career received a big boost when she appeared in the film ‘Martha Marcy May Marlene’ for which she was nominated for the ‘Critics' Choice Movie Award’ for ‘Best Actress’ and ‘Independent Spirit Award’ for ‘Best Female Lead.’ She scaled greater heights when she was cast as Sarah in the horror movie remake ‘Silent House.’ She continues to grow as a performer and is exploring versatile and challenging roles. American People
American Women
California Actresses
New York University
Aquarius Actresses
Childhood & Early Life
Elizabeth Olsen was born on February 16, 1989, in Sherman Oaks, Los Angeles, California, to Jarnette, a personal manager and former dancer with the ‘LA Ballet,’ and David Olsen, a real estate developer and mortgage banker in Los Angeles. Her parents got divorced in 1996.
She has two elder twin sisters, Mary-Kate Olsen and Ashley Olsen, who became celebrities at a young age. She also has an older brother named Trent Olsen and two younger half-siblings, Jake Olsen and Courtney Taylor Olsen.
She received singing and ballet lessons in her childhood and started acting at a very young age. She occasionally appeared in her elder sisters' movies and by the age of 11, she had played minor roles in ‘How the West Was Fun’ and the straight-to-video series ‘The Adventures of Mary-Kate & Ashley.’ The portrayal of these roles earned her some experience in acting and she started auditioning for other projects while still in fourth grade.
She was a student of ‘Campbell Hall School’ in North Hollywood, California, right from kindergarten to grade 12.
After graduation, she enrolled at the ‘New York University Tisch School of the Arts.’ In 2009, she traveled to Moscow, Russia, for a semester at the ‘Moscow Art Theatre School,’ through the ‘MATS’ program at the ‘Eugene O'Neill Theatre Centre.’ She graduated in March 2013 after almost six years of discontinuous study. 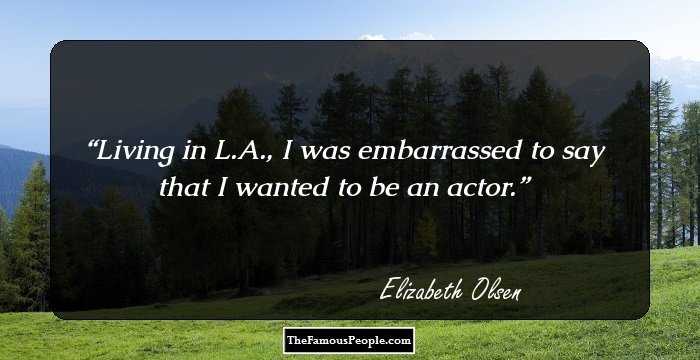 Continue Reading Below
Career
Elizabeth Olsen started her professional acting career when she was only four years old, appearing in six of Mary-Kate and Ashley's productions. She also auditioned for the film ‘Spy Kids.’
In 2011, she played her first major role in the film ‘Martha Marcy May Marlene.’ She received critical acclaim for her performance and won several critics’ awards. In the film, she played the protagonist role; a girl called Martha who suffers from hallucination and paranoia after escaping from an abusive cult to return to her family.
Next, she appeared as Sarah in the psychological horror movie ‘Silent House.’ Although the film got mixed responses, her performance was greatly appreciated. She also appeared in Carlotta’s music video ‘The Queen.’
She was next seen in the movies, ‘Liberal Arts’ by director Josh Radnor and ‘Red Lights’ by director Rodrigo Cortés. Both the films were released in 2012.
In 2013, she was seen in the movie ‘Very Good Girls’ in which she starred alongside Dakota Fanning.The same year, she co-starred in the American remake of the South Korean film ‘Oldboy’ in which she played the role of a young social worker, Marie. Later that year, she starred in ‘Kill Your Darlings’ in which she essayed the character of author Edie Parker.
In 2014, she acted in ‘Godzilla’ opposite Bryan Cranston and Aaron Taylor-Johnson.
In 2015, she played the role of ‘Scarlet Witch’ in ‘Avengers: Age of Ultron,’ the sequel to ‘The Avengers’ (2012).
Olsen portrayed Audrey Williams, Hank Williams's wife, in the 2015 biographical drama film ‘I Saw the Light’ which was directed by Marc Abraham.
She reprised her role as Scarlet Witch in ‘Captain America: Civil War.’ The film had its world premiere on April 12, 2016, in Los Angeles and was released in the US on May 6, 2016.
Continue Reading Below
Her films 'Godzilla' and 'Avengers: Age of Ultron' became international blockbusters and made big money at the box office. The movie 'Avengers: Age of Ultron' earned $1.4 billion.
In 2017, she starred in movies like ‘Wind River’ and ‘Ingrid Goes West.’
She was also seen in the 2018 sequel ‘Avengers: Infinity War’ and the 2019 sequel ‘Avengers: Endgame.’
‘Disney’ confirmed a ‘Marvel’ television series starring Olsen and Paul Bettany. The title of the show was confirmed as ‘WandaVision’ in April 2019. 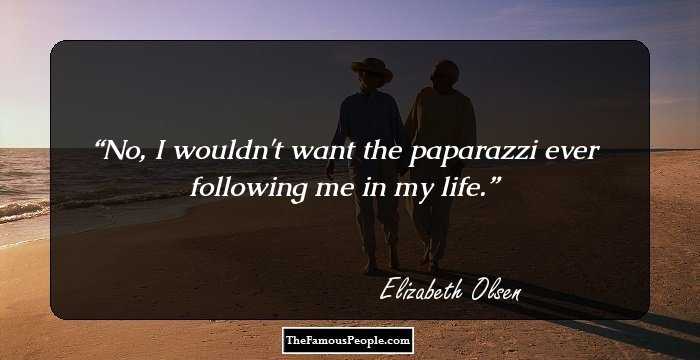 Awards & Achievements
In 2011, Elizabeth Olsen was nominated for 18 different awards for her performance in the critically acclaimed film ‘Martha Marcy May Marlene.’ She won six awards: ‘Most Promising Performer’ by ‘Chicago Film Critics Association,’ ‘Pauline Kael Breakout Award’ by ‘Florida Film Critics Circle,’ ‘Special Mention Award’ at ‘Ghent International Film Festival,’ ‘New Generation Award’ by ‘Los Angeles Film Critics Association,’ ‘Best Actress Award’ by ‘Vancouver Film Critics Circle,’ and ‘Best Breakthrough Performance Award’ by ‘Alliance of Women Film Journalists.’
In 2013, she was nominated for ‘BAFTA Rising Star Award.’ She also won the ‘Best Leading Actress Award’ at ‘Fangoria Chainsaw Awards’ for her performance in ‘Silent House.’
In 2015, she won the ‘Hollywood Rising Star Award’ at ‘Deauville American Film Festival’ for her performance in the movie ‘I Saw the Light.’
In 2016, she was nominated for a ‘Teen Choice Award’ for the movie ‘Captain America: Civil War.’
In 2019, she was nominated for ‘Critics' Choice Television Award for Best Actress in a Drama Series’ for playing Leigh Shaw in the movie ‘Sorry for Your Loss.’
Personal Life & Legacy
She began dating co-actor Boyd Holbrook in September 2012 and got engaged to him in March 2014. However, they broke up and called off their engagement in January 2015. 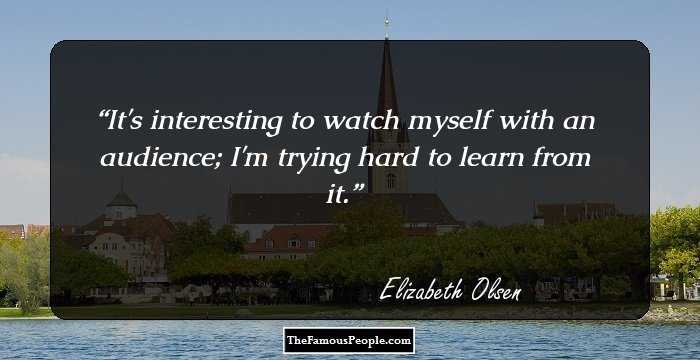 Quotes: Trying
Trivia
The Olsen siblings are of mixed ethnicity as their mother is of English descent, while their father is of Norwegian descent.
Elizabeth Olsen’s elder sisters' luxury fashion brand ‘Elizabeth and James’ was partly named after her.
She claims to be an atheist.
She auditioned for the role of Daenerys Targaryen for the fantasy drama television series ‘Game of Thrones.’

Quotes By Elizabeth Olsen | Quote Of The Day | Top 100 Quotes

See the events in life of Elizabeth Olsen in Chronological Order