Ashley Graham is a popular American plus-size model and TV presenter. Born and raised in Nebraska, Ashley has had a difficult past. From being confused about her sexual urges to being bullied in school due to her weight, she has suffered a lot. She started modeling in her teens, when she was offered a contract by Wilhelmina Models, a popular modeling agency in her home state. She made her way to the covers of a number of popular fashion magazines, such as Vogue and YM. She gained popularity for representing full-figured women. In 2009, she appeared in a Glamour editorial titled These Bodies are Beautiful at Every Size. By the end of 2012, she was presented with the Full Figured Fashion Week’s Model of the Year award. In 2013, she designed a lingerie line for Addition Elle. She has also judged the talent-hunt show America’s Next Top Model. In 2016, she became the first-ever plus-size model to appear on the cover of the Sports Illustrated Swimsuit Issue. Ashley Graham was born in Lincoln, Nebraska, on October 30, 1987. Her father is a database marketer, and her mother is a homemaker. Ashley grew up with her two younger sisters. Ashley was full-figured even as a kid. Puberty hit her when she was in fourth grade, and that made her endure a lot of sexual abuse.

She had a troubled relationship with her father. She was also a victim of body-shaming in school. She was bullied quite a lot and was called “thunder thighs” due to her oversized thighs.

Ashley soon developed issues due to the abuse she faced in school. She was diagnosed with attention deficit hyperactivity disorder (ADHD) and dyslexia. By the time she was 14 years old, older men had begun making sexual advances toward her. Ashley’s mother became very cautious about these incidents. At one point, she even paid Ashley’s younger sisters to scream out “Mom! Mom!” every time they saw an older man approaching Ashley.

Although she resisted any sexual contact at a young age, Ashley became quite liberal about sex as she grew older. This caused her further psychological issues.

Ashley Graham was spotted by a talent agent at a local mall in Nebraska when she was 12 years old. The agent suggested that her mother send some of Ashley’s photos to a modeling agency. This was the beginning of Ashley’s modeling career. She appeared in numerous magazines and billboards before she graduated from Lincoln Southwest High School in 2005. She soon arrived in New York to work as a full-time model.

In the early stages of her modeling career, she faced trouble landing jobs due to her unconventional body structure. For the first few years, she received offers to feature as a catalogue girl and was told that she would never be able to go beyond that. She soon got an offer from Ford Models. Unfortunately, Ford shut down their plus-size division soon after. This was a major blow to Ashley, and she then joined IMG, another top modeling agency.

Soon, her career picked up pace. One of her first major breaks came her way in 2007, when she was profiled by Sally Singer of Vogue magazine. In 2009, she appeared in a Glamour editorial titled These Bodies are Beautiful at Every Size. The campaign featured her alongside other popular plus-size models, such as Kate Dillon Levin, Amy Lemons, Jennie Runk, and Anansa Sims.

She made news again when she appeared in a controversial advertisement for Lane Bryant, which was later banned in many countries. By the time it had been taken off from YouTube, the commercial had been watched by more than 800 thousand viewers. The commercial was covered by leading American publications, such as the New York Post and The Huffington Post.

When the controversy went out of control, she made an appearance on The Tonight Show with Jay Leno to address the issue. The show made her a household name in the US and people appreciated her for being confident about her body, despite being body-shamed on social media.

In 2010, Ashley Graham made an appearance in the editorial of Bust magazine. She then became part of a number of Levi’s and Marina Rinaldi campaigns. Some of her most notable works have been for Addition Elle, Bloomingdale’s, Nordstrom, and Target. In 2012, she appeared on massive billboards for Lane Bryant in New York.

Gradually, she came to be regarded as one of the most famous contemporary plus-size models. She earned the Full Figured Fashion Week’s Model of the Year award by the end of 2012.

In 2013, Ashley Graham embarked into fashion designing briefly. She designed a lingerie chain for Addition Elle, a Canada-based plus-size clothing retailer. The same year, she made an appearance on Made, an MTV reality show, which featured her as a coach for an aspiring plus-size model. In May 2014, she was featured in Harper's Bazaar magazine’s pre-fall collection and beauty editorial. She then appeared on the cover of Elle Quebec.

Ashley Graham has appeared as a backstage host of the Miss USA 2016 and the Miss Universe 2016 pageants. She repeated the job the following year, too, for both the contests. In addition, she has also appeared as a judge in the talent-hunt show America’s Next Top Model, which is broadcast on VH1.

In 2017, Ashley wrote her autobiography, A New Model: What Confidence, Beauty, and Power Really Look Like. The memoir narrates her initial struggle as a plus-size model and tells how she overcame the obstacles with confidence.

Ashley Graham has always been vocal against body-shaming. She has given speeches about body acceptance and body image in schools. She has supported the Health at Every Size Movement and has been part of charitable work in South Africa with the Themba Foundation.

As her initial relationships were mostly sex-based, Ashley Graham often talks about the drawbacks of such overtly sexual relationships. She claims that when she finally found the right man, she abstained from having sex until they got married. She met Justin Ervin, a videographer, in a church. They dated for a while before getting married in 2010. On January 18, 2020, Justin Ervin and Ashley Graham welcomed their first son. In January 2022, Ashley gave birth to twin boys, Roman and Malachi.

See the events in life of Ashley Graham in Chronological Order 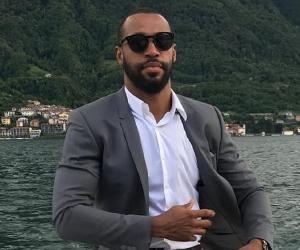