Advanced Search
Annie Parisse is an American actress, best known for appearing as Alexandra Borgia on two seasons of the NBC legal drama series 'Law & Order'. She also gained fame for playing Sam Delmonico on the Netflix original comedy show 'Friends from College' during its two seasons. She first came in the spotlight for portraying the role of Julia Snyder on the CBS soap opera 'As the World Turns', for which she earned an Emmy nomination. Her other significant television appearances were on 'Third Watch', 'The Pacific', 'Rubicon', 'Unforgettable', 'Person of Interest', 'The Following', 'Vinyl', 'The Looming Tower' and 'The First'. She also made a guest appearance on her husband Paul Sparks's series 'House of Cards'. Parisse has worked in several movies as well, which include 'How to Lose a Guy in 10 Days', 'National Treasure', 'Monster-in-Law', and 'Definitely, Maybe'. Meghan Markle
31st July In History
DID WE MISS SOMEONE?
CLICK HERE AND TELL US
WE'LL MAKE SURE
THEY'RE HERE A.S.A.P
Quick Facts

American People
Alaska Actresses
Fordham University
Leo Actresses
American Actresses
Rise to Stardom
Annie Parisse began acting at Youth Theatre Northwest, a children's theatre in Mercer Island, Washington. Her mother got her enrolled there because she was very shy in her childhood. She was silent during the audition and got a non-speaking part in a western play. Parisse initially wanted to pursue literature or comparative religion in college, but eventually enrolled in a theatre course at the Fordham University in New York City, where she began appearing in lead roles in theatrical productions like 'Medea' and 'Antigone'. She made her television debut in 1998 when she was cast in the role of Julia Snyder on the soap opera 'As the World Turns', in which she played a regular character until 2001 and then guest starred in a few episodes in 2002. The role earned her a Daytime Emmy Award nomination for Outstanding Younger Actress in a Drama Series in 2001.
Recommended Lists:

Actresses Who Are In Their 40s
Women Film & Theater Personalities
American Film & Theater Personalities
American Female Film & Theater Personalities
Continue Reading Below
Career
Annie Parisse made her big screen debut with a small role in the 1999 film 'On the Q.T.' Apart from playing a regular role on 'As the World Turns', she also made guest appearances on series like 'Big Apple', 'Third Watch' and 'Friends'. In 2002, she essayed the role of an exotic dancer in the episode 'Attorney Client' of 'Law & Order', a show she later returned to in 2005 as Assistant District Attorney Alexandra Borgia during the 15th season. In the meantime, she played supporting roles in several movies, including 'How to Lose a Guy in 10 Days', 'National Treasure', 'Monster-in-Law' and ‘Prime'. After appearing in 33 episodes, she decided to leave 'Law & Order', and her character was killed off in 2006, becoming the shortest serving ADA in the series' history.
She subsequently returned to stage, starring in a revival of Craig Lucas's 'Prelude to a Kiss' on March 8, 2007. In the following years, she appeared in the title role in the Off-Broadway production of 'Becky Shaw'. During this time, she acted in films, such as 'Blackbird', 'What Just Happened' and 'Definitely, Maybe', as well as in a couple short films. She returned to television in 2010 and made guest appearances on shows like 'Fringe', 'The Pacific', 'The Big C', and 'Rubicon'. In the next year, she appeared in two episodes of the police procedural show 'Unforgettable', in addition to performing in the New York Public Theater's Shakespeare in the Park productions of 'Measure for Measure' and 'All's Well that Ends Well'. She appeared in short roles in several films, but her scenes as Martha Connors, the wife of Dr. Curt Connors a.k.a. the Lizard, were deleted from the final version of the 2012 film 'The Amazing Spider-Man'. In recent years, she had recurring roles on the TV shows 'Person of Interest' (2011-2016) and 'The Following' (2013). She was also a main cast on the show 'Friends from College' between 2017 and 2019.
Recommended Lists:

Leo Women
Family & Personal Life
Annie Parisse was born as Anne Marie Cancelmi on July 31, 1975, in Anchorage, Alaska, to Annette and Louis G. Cancelmi. Her mother was a teacher at Saint Kilian Parish School in Cranberry Township, Butler County, Pennsylvania; while her father was the assistant vice-president of public relations at Alaska Air. Parisse is half-Italian and quarter Slovak and Polish from her father's side, and half-Italian and half-Syrian from her mother's side. She grew up with two brothers, Louis and Michael. Louis Cancelmi is an actor who is married to Elisabeth Waterston, the daughter of 'Law & Order' veteran Sam Waterston. Michael Cancelmi is an Italian teacher. Annie Parisse moved to Seattle, Washington, with her family when she was 11 years old. She played ice hockey while growing up in Alaska, and took up soccer after moving to Seattle. She attended Mercer Island High School and later moved to New York City at the age of 18 to study theatre at the Fordham University. She adopted the surname of her late great-grandmother Anna Maria Parisse as her stage name.
Annie Parisse met actor Paul Sparks in 2005 and got married to him later that year. Sparks, who is known for his work on TV shows like ‘Boardwalk Empire,’ ‘House of Cards’, and ‘The Girlfriend Experience’, has also made a few guest appearances on 'Law & Order' and its spin-offs. The couple that lives in Manhattan has a son named Emmett, born in 2009, and a daughter named Lydia, born in 2014. 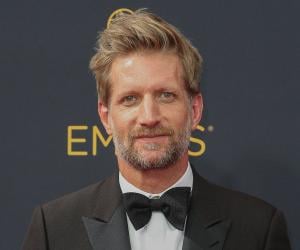