Paul Sparks, dubbed as TV’s “sexiest creeper” by an online tabloid, is an American film, TV, and stage actor. He is best known for playing ‘Mickey Doyle’ in ‘Boardwalk Empire,’ ‘Thomas Yates’ in ‘House of Cards,’ and ‘David Tellis’ in ‘The Girlfriend Experience.’ Paul believes that the character ‘Ejlert Lovborg’ in the 2009 revival of ‘Hedda Gabler’ brought him the stardom he deserved. He was nominated for multiple awards and also won a few. Paul has frequently collaborated with Michael Shannon for various projects. He is health-conscious and an avid runner. A victim of diabetes, he has participated in marathons to raise awareness and funds for the ‘Juvenile Diabetes Research Foundation.’ 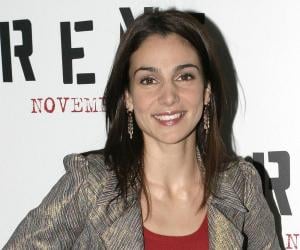 Ezra Miller
Actors #2771
Film & Theater Personalities #6090
DID WE MISS SOMEONE?
CLICK HERE AND TELL US
WE'LL MAKE SURE
THEY'RE HERE A.S.A.P
Quick Facts

American People
Oklahoma Actors
New York University
Tall Celebrities
Tall Male Celebrities
Childhood & Early Life
Paul was born on October 16, 1971, in Lawton, Oklahoma, US, to Michael “Mike” Sparks and Jane.
He participated in school plays. In high school, his drama teacher, Paula McConnell, and another lady, Tracey Callahan, encouraged him to take up acting.
He joined the ‘Oklahoma State University,’ Stillwater, Oklahoma, to study chemistry but was more interested in acting. Hence, as advised by his father, he moved to ‘Tisch School of the Arts,’ ‘New York University,’ New York, to earn a BFA degree in drama.
Continue Reading Below
You May Like

The Sexiest Men Of 2020, Ranked
Career
After graduating from ‘New York University’ in 1995, Paul participated in many projects but mostly appeared in many minor roles. In 1998, he appeared as ‘Rod’ in an episode of the family drama ‘Trinity,’ titled ‘In a Yellow Wood.’
His performance as ‘Bobby Reyburn’ in the play ‘Coyote on a Fence,’ staged at ‘Urban Stages’ in 2000, earned him a nomination for the ‘Drama Desk Award’ for ‘Outstanding Actor.’
Between 2000 and 2005, he appeared in different roles in the police-procedural franchise ‘Law & Order.’ This period also witnessed some of his best performances in theater. He played multiple characters in the play ‘Take Me Out’ on different occasions in the years 2003 and 2004.
In 2000, he played ‘Bobby Reyburn’ in the play ‘Coyote on a Fence’ and then played multiple roles in the play ‘Blackbird.’ He reprised the character in the play's movie adaptation released in 2007.
He earned more nominations at the ‘Drama Desk Awards,’ such as for ‘Outstanding Featured Actor in a Play’ (for the role of ‘Brad Youngquist’ in ‘Orange Flower Water’) in 2005 and ‘Outstanding Actor in a Play’ (for the part of ‘Yul Carroll’ in ‘Essential Self-Defense’) in 2007. He was nominated for a ‘Drama Desk’ again, in 2011, for the role of ‘Ray’ in ‘Dusk Rings a Bell.’
He made his film debut in 2005, as ‘Jason’ in ‘Headscape.’ The following year, he played ‘Andre’ in the movie ‘The Treatment’ and as ‘Aaron’ in three episodes of the crime-drama series ‘Brotherhood.’
He acted in six films in 2008, appearing as ‘Derek’ in ‘Synecdoche, New York,’ ‘12 Step Member’ in ‘Rachel Getting Married,’ ‘Detective Burke’ in ‘Deception,’ ‘Detective Eclisse’ in ‘Afterschool,’ ‘Gus Papitos’ in ‘The Missing Person,’ and ‘Bobby’ in ‘The Understudy.’
He made his ‘Broadway’ debut in the 2009 revival of ‘Hedda Gabler,’ as ‘Ejlert Lovborg.’ With the role of gangster ‘Mickey Doyle’ in the ‘HBO’ period crime-drama series ‘Boardwalk Empire,’ he became a recognizable actor. The series was aired from 2010 to 2014. His portrayal earned him the ‘Screen Actors Guild Award’ for ‘Outstanding Performance by an Ensemble in a Drama Series,’ in 2010 and 2011.
Paul delivered a critically acclaimed performance as ‘Carver’ in the 2012 movie ‘Mud.’ This performance earned him the ‘Robert Altman Award’ at the ‘Film Independent Spirit Awards.’ In 2012, he played ‘Wes’ in the independent romantic drama ‘Sparrows Dance.’
His fame soared between 2015 and 2017. He was part of many popular TV shows. He portrayed ‘Thomas Yates’ in the political thriller ‘House of Cards,’ ‘David Tellis’ in the anthology series ‘The Girlfriend Experience,’ and ‘Don Taylor’ in the crime drama ‘The Night Of.’ His performance in ‘House of Cards’ earned him a ‘Primetime Emmy’ nomination for ‘Outstanding Guest Actor in a Drama Series’ in 2016.
His portrayal of ‘Tilden’ in the play ‘Buried Child’ helped him earn a nomination for ‘Outstanding Actor’ at the 2016 ‘Lucille Lortel Awards.’ The play ‘Edward Albee’s at Home at the Zoo’ brought him multiple award nominations in 2018, including one for the ‘Drama Desk Award’ for ‘Outstanding Actor,’ one for the ‘Lucille Lortel Award’ for ‘Outstanding Actor,’ one for the ‘Drama League Award’ for ‘Distinguished Performance,’ and one for the ‘Outer Critics Circle Award’ for ‘Outstanding Featured Actor.’
The year 2017 witnessed Paul play two real-life characters: James Gordon Bennett Sr., founder of the ‘New York Herald,’ in the movie ‘The Greatest Showman,’ and Reverand Billy Graham, an American evangelist, in the historical TV drama series ‘The Crown.’
The year 2018 saw him feature in the main roles of ‘Steve Schneider’ in ‘Waco’ and ‘Howard’ in the ‘Starz’ network drama series ‘Sweetbitter.’ He also appeared in the supporting role of 'Blundell' in the short film 'Long Way Back Home.'
He joined the cast of ‘Castle Rock’ in 2019, as ‘John “Ace” Merrill.’ He appeared in 10 episodes of the series. He has a few upcoming projects, such as the films ‘Ford V. Ferrari,’ ‘Human Capital’ 'The Lovebirds,' and 'Hands that Bind.'
Family & Personal Life
Paul’s father was a high-school football coach, and his mother was an elementary school teacher.
He is married to Annie Parisse, who is an accomplished actor. They have a son, Emmett (born in October 2009), and a daughter, Lydia (born in 2014).
Trivia
Michael Shannon and Paul are close friends and have worked together on multiple occasions.
You May Like

See the events in life of Paul Sparks in Chronological Order