Andrey Melnichenko is a Russian industrialist and philanthropist who was ranked 89th in the Forbes World’s billionaires list (9th in Russia) in 2017. One of the self-made business magnates of the country, he has laboriously worked his way to the top with his acute sense of business and skill sets. Initially starting off in the banking and finance sector, Melnichenko soon progressed to setting up industries. He began by forming the Siberian Coal Energy Company (SUEK) and later proceeded to acquire a stake the mineral and chemical Company EuroChem. He also set up the energy generating company, Siberian Generating Company. Currently, Melnichenko holds about 90% of the company shares in EuroChem and about 92.2% of the shares in SUEK and SGK each. He serves as the Chairman of the Strategy Committee at all the three- EuroChem Group AG, SUEK Group and SGK. His personal wealth is estimated to be $13.2 billion, making him the 9th richest Russian in the country. Business apart, Melnichenko is also one of Russia’s main social investors and philanthropists. As of now, he has invested about $16 billion in Russia’s economy and industrial sector. Mikhail Prokhorov
DID WE MISS SOMEONE?
CLICK HERE AND TELL US
WE'LL MAKE SURE
THEY'RE HERE A.S.A.P
Quick Facts

Russian People
Philanthropists
Russian Men
Moscow State University
Pisces Entrepreneurs
Childhood & Early Life
Andrey Melnichenko was born on March 8, 1972 in Gomel, Belarus. Born as a Belorussian, he moved to Russia when he was young.
Melnichenko completed his early education from the Boarding School of the Specialized Education and Research Centre. The centre trains students to gain admission at the top universities in Russia.
He later enrolled at the School of Physics at Moscow State University but soon transferred himself to Plekhanov Russian University of Economics, graduating from the same in 1997 with a bachelor’s degree in Arts/Science with a major in Finance Credit.
Continue Reading Below
You May Like

Famous Beautiful Women With Green Eyes
Career
Andrey Melnichenko started his career in currency exchange operating a number of booths in Moscow, but soon progressed to banking and finance, where his forte lay.
In 1993, Melnichenko co-founded MDM Bank and served as the Chairman of the Management Board until 1997. In 1997, he bought his partners’ share as well becoming the only shareholder of the institution. By 2003, MDM Bank had become one of Russia’s largest private sector banks.
From 2001 to 2005, Melnichenko chaired MDM Bank's board of directors. Expanding the horizons of his company further, Melnichenko co-founded the MDM Group in 2001 which comprised industrial assets which later formed Siberian Coal Energy Company (SUEK) and the mineral and chemical Company EuroChem. From 2001 to 2004, he also served as the President of the MDM Group.
Apart from coal and mineral, Melnichenko also was one of the founders of TMK Pipe and Metallurgic Company. Within a short span of time, it became Russia’s largest manufacturer and exporter of steel pipes. Later in 2004, Melnichenko sold his part of the company shares in the London Stock Exchange.
Between 2004 and 2007, Melnichenko sold out all of his personally owned shares of the MDM Bank to his friend and partner Sergei Popov in a phased manner. Though his move was initially criticized, it was later revealed that he did this to focus his energy on the development of his industrial and energy assets—the fertiliser company EuroChem, the coal producer SUEK, and the Siberian Generating Company (SGC).
In 2011, Melnichenko created the SGK. Two years later, he bought all the shares held by his ex-partners to become the primary shareholder of SUEK and SGK. He also headed the Board of Directors of OJSC SUEK from March 2004 to April 2015.
Currently Melnichenko serves as the Chairman of the Strategy Committee (Non-executive director) of EuroChem Group AG and is also Chairman of the Strategy Committee of SUEK LTD. He is the main beneficiary of EuroChem, SUEK, and SGK.
Apart from his business ventures, Melnichenko has been a member of the Bureau of the Board of Directors of the Russian Union of Industrialists and Entrepreneurs (RSPP) since 2007. He serves as the Chairman of the Mining Commission as well.
Major Works
Though Andrey Melnichenko started his career in the field of banking and finance, it was with his establishment of the chemical and metallurgy industries that his career took a flight to the top.
His EuroChem Company is not only Russia’s largest fertilizer producer but also one of the world’s top producers of mineral fertilizers. What’s more, his SUEK (Siberian Coal Energy Company) Group currently holds the number one position as the coal producer in Russia. It also holds its place amongst the world’s top ranked coal companies. Melnichenko’s OOO Siberian Generating Company (SGK) has become the leading electric power generating company in Siberia.
Awards & Achievements
In 2016, Andrey Melnichenko was awarded a special award by the President of Russia for ‘good deeds’ and charitable works.
Personal Life & Legacy
In 2005, Andrey Melnichenko tied the nuptial knot with former model and pop singer Aleksandra Melnichenko in the South of France.
A self made billionaire, Melnichenko has been in the limelight for his luxurious lifestyle and extravagant possessions. He owns two yachts, M/Y A and S/Y A. Both the yachts have been designed by Philippe Starck. He also owns a Boeing 737 BBJ.
He has a huge villa, Villa Altair, in Antibes which served as his wedding venue as well. The Melnichenkos also own Harewood Estate in Ascot, Berkshire in the United Kingdom.
Melnichenko has a passion for arts and culture, his personal collection of Impressionist paintings adorning his home and yacht being an evidence of the same. Some of the pieces in the collection include works by the world renowned artist Claude Monet.
You May Like

See the events in life of Andrey Melnichenko in Chronological Order 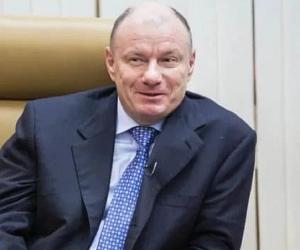