Advanced Search
Al Capone was one of the most notorious gangsters of all time. His tales of terror sends shivers down the spines of people across the world even till date. Capone’s notoriety has been a source of great inspiration for few movies where the central character was modelled based on his tale. Though Capone dropped out of school at a really early age, and belonged to poor parents, he managed to become really wealthy and influential within a few years. After working as a petty thief with few small time gangs, he was adopted by the noted gangster Torrio, who helped him become a really big name in the crime world. Capone had also helped politician William Thompson win the elections through his power. In his initial years, Capone had earned the reputation amongst the public for being a ‘Robin Hood’ of sorts. He even donated large amounts money earned through his crime business to charity, however he totally damaged his reputation with the cold-blooded St. Valentine’s Massacre. In spite of being a mafia leader, it’s claimed that Capone was very polite and generous, but he also turned out to be the worst enemy if someone went against him. American Celebrities
Drug Lords
American Men
Male Criminals
American Gangsters
Childhood & Early Life
Al Capone was born on 17 January 1899, in New York, to Teresina and Gabriele Capone. Both his parents were immigrants of Italian origin. While Capone’s mother worked as a seamstress, his father Gabriele worked as a barber. His original name was Alphonse Capone.
Capone discontinued his studies when he was just a sixth grader. It’s claimed that he was expelled from school since he had assaulted his teacher. He later took up petty jobs to support himself.
Capone was soon noticed by then noted gangster Johnny Torrio. In 1920, Torrio took the young Capone under his wings, and made him a part of the infamous ‘Chicago Outfit’. The gang was into businesses such as prostitution, drug trafficking, and many others. 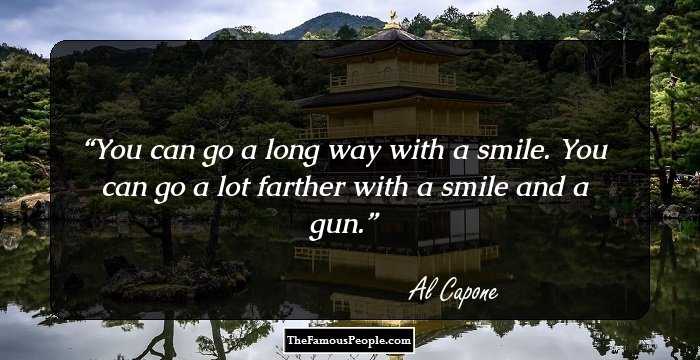 Quotes: You
Continue Reading Below
Later Life
Capone soon became a deputy to Johnny Torrio after James Colosimo, also known as ‘Big Jim’ was brutally killed. ‘Big Jim’ was the founder of the gang, and completely controlled the prostitution business himself. It was alleged that his death was a conspiracy planned by Capone himself.
In 1925, few members of rival gangs tried assassinating Capone, but he escaped. Within a few days even Johnny Torrio was attacked. Post these incidents, Torrio decided to flee the country. He appointed Capone as the new head of the gang.
The then 26 year old Capone had a lot of responsibilities on his shoulders. Other than the flesh trade, there were also liquor and transportation businesses to handle. Capone used violence to the best of his advantage to extract more income out of such businesses. Firms had no choice but to trade with Capone’s gang, else they had to face dire consequences.
Capone became such an influential person that he played an important role in helping politician William Thompson win the election of Mayor of Chicago. Capone had apparently donated $250,000 to support William in the 1927 elections, in which the latter emerged victorious. However, Capone’s growing notoriety posed to be a threat for William’s political image, and the gangster was ignored very soon.
The US government decided to tighten its screws on Capone in 1927. He was asked to declare all his illegal assets.
In 1929, Capone was tried by the federal court for various crimes. He was jailed the same year for possessing a gun during a trip to Philadelphia. He spent the next nine months behind bars.
In 1931, Capone was sentenced to jail on charges of income tax evasion. After spending two years in a jail near Atlanta, Capone was shifted to the notorious Alcatraz prison where he spent several years. Since the jail was located on an island, it cut off Capone’s contacts with the outside world. When Capone came out of jail he was mentally disoriented and was suffering from several diseases. 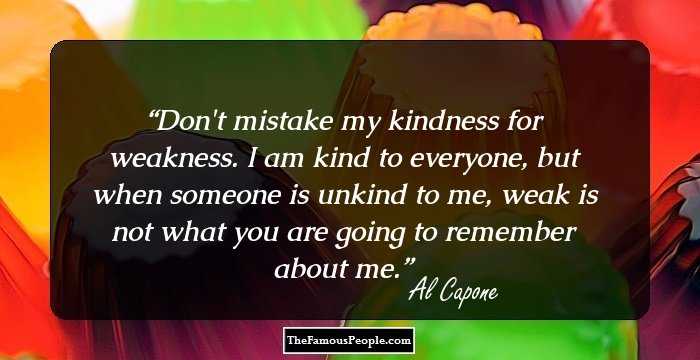 Quotes: You, Me, I
Major Crimes
A crime which Capone is remembered for till date is the St. Valentine’s Day massacre of 1929. Capone wanted to completely wipe out the ‘North Side’ gang, most importantly its leader Bugs Moran to take Chicago’s control completely under his wings.
Continue Reading Below
Capone’s henchmen stayed in a dwelling near Moran’s warehouse to keep a close watch on his movements. Capone’s gang members then posed as policeman and carried out a fake raid on Moran’s hideout. The seven members of the Moran gang were then gunned down by Capone’s men.
Personal Life & Legacy
Capone had 8 other siblings. Two of his brothers Ralph and Frank worked along with him, and managed few activities of his gang. Ralph mainly looked after the bottling business, which had both legal and illegal aspects, hence earning him the nickname ‘bottles’.
Capone had an affair with a woman named Mae Josephine Coughlin. Coughlin was pregnant with their son Albert before the marriage. Post Albert’s birth, Capone and Coughlin got married, in 1918.
After Capone earned enough money he bought a modest house in the south side of Chicago where he moved along with his family, including his siblings.
Capone had contracted the dreaded disease Syphilis at a young age, however he left it untreated. When Capone was jailed at Alcatraz, the disease had reached an advanced stage and deteriorated his health.
In 1939, Capone was released from Alcatraz jail after serving an imprisonment of 6 years. He was later shifted to a hospital located in Baltimore for mental treatment. He stayed at this place for the next 3 years.
Capone finally succumbed to cardiac arrest on 25 January 1947, and died at the age of 48. 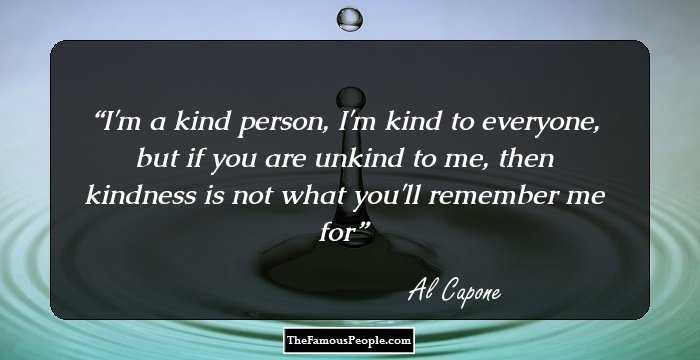 Quotes: You, Me
Trivia
Al Capone has been an inspiration for more than a dozen movies and television projects. Though a biopic titled ‘Al Copane’, made in 1959, was a direct take on his life, he has also been portrayed under various fictitious names in several other movies. His style of wearing the fedora hat has been a popular trend, and is being followed by many till date.

See the events in life of Al Capone in Chronological Order