Alison Brie is an American actress, writer and producer who catapulted to fame after portraying two very different characters in two different television series. The first was the AMC acclaimed drama series Mad Men, where she essayed the recurring role of Trudy Campbell, a suburban housewife from 1960s. In the second series – a comedy, Community – she portrayed a contemporary college student Annie Edison. The two roles established her versatility both as a comedic and a dramatic actress. Later, her portrayal of Ruth Wilder in the comedy-drama series GLOW further elevated her profile as an actress and even won her numerous award nominations including ones at Golden Globe and Screen Actors Guild Awards. Television aside, she has also acted in numerous movies, prominent amongst which are the Scream 4, Sleeping with Other People, No Stranger Than Love, The Little Hours and Promising Young Woman. She has also lent her voice to the computer animated comedy film The Lego Movie and The Lego Movie 2: The Second Part. Additionally, she has voiced various characters in the much appreciated and award-winning animated comedy series BoJack Horseman. Acting aside, she has also ventured into production, direction and writing. 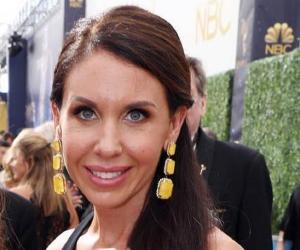 Alison Brie Schermerhorn was born on 29 December 1982, in Hollywood, California as the younger daughter of Charles Terry Schermerhorn and Joanne Brenner.

Her father worked as a musician and freelance entertainment reporter while her mother was employed at a non-profit childcare agency, Para los Niños. Her parents separated when she was five years old and she and her elder sister, Lauren Schermerhorn, were raised by her divorced parents.

For her education, she went to South Pasadena High School and passed out in 2001. She then joined California Institute of the Arts and completed her BFA in Acting in 2005. During this time, she also attended the Royal Scottish Academy of Music and Drama in Glasgow, Scotland.

She discovered her passion for acting very early and began acting at the age of five or six at Los Feliz Jewish Community Center where she first played Toto in The Wizard of Oz. Though she loved acting, she never wanted to be a television actress, rather she aspired to perform on stage.

When she was seventeen, she worked part time as a clown named Sunny and performed at kid’s birthday parties.

In 2006, she made her television debut by acting in an episode of Hannah Montana, a Disney Channel’s teen sitcom.

In 2007, she was cast as Trudy Campbell in the critically acclaimed period drama series Mad Men. The show which ran from 2007 to 2015 brought her tremendous recognition.

In 2008-2009, she starred in a web television series My Alibi where she played Rebecca Fuller. In 2009, she played Amber in another web series Hot Sluts.

During this time, she continued to take up roles in films like Born, Dickie Smalls: From Shame to Fame (both in 2007), Parasomnia and The Coverup (both 2008). She also worked in short films Buddy 'n' Andy, Salvation and Texas (both 2008) and Us One Night (2009) as well as a television movie The Deadliest Lesson (2008).

In 2009, she bagged yet another important role of her career, that of Annie Edison on the NBC/Yahoo! View sitcom Community. Her role in the ensemble comedy, which ran for six seasons till 2015, not only won her appreciation but also a nomination for the Critics' Choice Television Award for Best Supporting Actress in a Comedy Series.

A couple of more movies – The Home Front and Raspberry Magic – in 2010 was followed by a role in the meta slasher horror film Scream 4 in 2011 wherein she played the role of an extremely ambitious personal assistant Rebecca Walters.

Her other assignments during this period included working in an episode each of web series Sketchy (2012) and The ArScheerio Paul Show (2013).

In 2014, she became the voice of Princess Unikitty in the computer animated comedy film The Lego Movie. Later, in 2019, she once again lent her voice for the same character in The Lego Movie 2: The Second Part.

In 2014, she took up a voice role in the Netflix animated alt-comedy series BoJack Horseman which continued for six seasons till 2020. In it, she voiced a variety of characters including Diane Nguyen, Vincent Adultman and Princess Diana.

Her film roles during the period includes romantic comedies like Save the Date, The Five-Year Engagement (both 2012), Sleeping with Other People, No Stranger Than Love (both 2015) and How to Be Single (2016).

In 2015 and 2016 respectively, Alison Brie lent her voice to video games Lego Dimensions and Marvel Avengers Academy. In 2016 again, she voiced an animation adventure short The Lego Movie: 4D – A New Adventure which played at Legoland parks and Legoland Discovery Centres.

In 2016, she acted in a three-part television series Doctor Thorne and appeared in an episode of another sitcom Teachers. For the latter, she also turned executive producer.

In 2017, she acted in the historical black comedy film The Little Hours, the biographical comedy-drama The Disaster Artist, and the historical political thriller The Post.

In 2017, she landed another significant role of her career – the Netflix comedy-drama series GLOW wherein she played a struggling actor Ruth Wilder who falls for the ring. The series was inspired by the 1980s real-life female wrestling league Gorgeous Ladies of Wrestling. For the show, she learnt to wrestle in order to perform all her stunts for the show herself.

The series ran till 2019 and won her critical appreciation and numerous award nominations including a Golden Globe Award for Best Actress – Television Series Musical or Comedy in both 2018 and 2019. In 2019, she also directed an episode of the show.

In 2018, she appeared as herself in the music video of musician, singer and songwriter Beck David Hansen’s song Colors.

In 2020, she once again turned director for an episode of the anthology documentary television series Marvel's 616. In 2020 again, she wrote and produced – apart from acting in – a psychological drama film Horse Girl. The year also saw her acting in a black comedy thriller Promising Young Woman, a romantic comedy Happiest Season and a horror film The Rental produced and directed by her husband Dave Franco.

Alison Brie met Dave Franco in 2011 and the two tied the knot in 2017. They have no kids and have decided not to become parents. Instead, they want to focus on their respective careers.

The couple enjoys travelling together as well as staying at home, watching TV and cooking.

They have two cats Harry and Arturo who they adore.

See the events in life of Alison Brie in Chronological Order