Considering the youth of today, it would be fair to say that fashion now days is synonymous with girls. The 20-something Alisha Marie falls into a bracket of fashionistas who are carefree and out there to rule the world. This YouTube vlogger has a successful channel to her credit that speaks about morning routines, lifestyle, room decoration, fashion, DIY projects, beauty, and lots more. This pretty young head-turner launched her first channel in 2008 and ever since then has been a rising start in the world of YouTubers. Born on April 5th, this Arian has more than 4 million subscribers on her self-titled YouTube channel which goes on to speak volumes about her success in this field. If these whooping numbers do not give you a fair idea of the kind of success this blooming star is headed for, then hold your breath, we have some more news for you. Alisha was also seen performing alongside super star celebrities like Jessie Paege, Alyson Stoner and Niki And Gabi on the ‘Girls Night In’ tour which featured popular lifestyle and fashion vloggers. Her peppy and happy nature has not only attracted tons of subscribers to her page but also leading brands like Yahoo, P&G, J.C. Penney and Cartoon Network who have had the delight of working with Marie. American People
Fashion Vloggers
American Women
California YouTubers
Aries Youtubers
The Meteoric Rise To Stardom
The bubbly and chirpy Alisha Marie that we see today on her super popular YouTube videos is a lot different from the girl who first stepped into the world of entertainment. She created her account on YouTube in April 2008 but it took her a good three years to upload her first video in January 2011. The reason she took such a long time is not specified but maybe it was just the insecurities of a silly little 15-year-old who has now turned out to be a confident girl who is a role model for millions all over the world. Alisha is the younger of the two sisters in her family. Though her older sister Ashley is not as popular, she was tagged in one of Alisha’s videos in 2014. The younger of the two sisters is such a hit on YouTube that people eagerly wait for her latest clip. Some time back, when Alisha couldn’t post a video because apparently she was travelling, she started getting comments like, “Alisha where's this week's video? :(“and “yeah I can't find the video for this week???????? :( :(“. Such comments speak volumes about how much she has impacted the youth of today.
Recommended Lists:

The Sexiest Men Of 2020, Ranked
Continue Reading Below
What Makes Alisha Marie So Special
The GenX is filled with bubbling energy and spirit to do the best in whatever they lay their hands on. They come up with unique ideas to break age old traditions of doing things and establish new and novel methods that not only simplify ways of doing things, but also add an element of fun to it. Alisha is one of those youngsters who fit into the bracket and does complete justice to it. Her fashion tips have influenced way more than 4 million subscribers to look fabulous and boost their self-confidence. She also gives tons of handy tips on how to make our rooms look prettier, since handling room décor is absolutely her forte. She also posts clips on morning routines and videos that are typically girl oriented and hence most of her fan base consists of enthusiastic girls. It is the fresh energy that she radiates in her clips that make her a cut above the other vloggers her age.
Recommended Lists:

Beyond Fame
Apart from being exceptionally famous in the world of videos and having an insane number of followers on twitter and Instagram, she has also signed a deal with ‘United Talent Agency’ that is a talent and a literary firm. This rock star has also featured in both the seasons of ‘Girls Night In’ which bought her a lot of popularity and media attention. Famous celebrities like Jessie Paege and Alyson Stoner too have performed with this young superstar. This prominent vlogger has also been associated with Evegail Andal at STX Entertainment and Jon Pfeiffer at Pfeiffer FitzGibbon.
Recommended Lists:

Behind The Curtains
As much as we love her and want to know more about her, not much is revealed about this vlogger’s personal life. Alisha Marie, the brain behind the successful YouTube channel ‘macbby11’ came into this world on April 5, 1993 and was born in a beautiful place called Riverside, California. She has an older sister named Ashley and her close friend who is also a popular YouTuber is known to the world by the name of Eva Gutowski.
Recommended Lists: 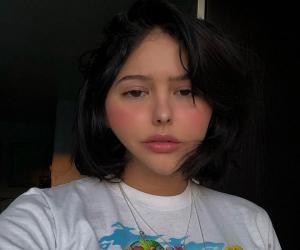