Popularly known as Princess Alice and ‘The Other Washington Monument’, Alice Roosevelt Longworth was the oldest child of President Theodore Roosevelt and his only from first wife, Alice Hathaway Lee. A socialite and writer, she led a controversial life all through. Since young, Alice was a rebellious child. She lived life according to her own terms and never really bothered of what the society thought about her. When Theodore Roosevelt took to the office of the President, she gained instant limelight and became a celebrity and fashion icon. Unlike women of those days, she was a nonconformist and a rule breaker. It was her rebellious nature coupled with defiant attitude unconventional behaviour and acidic comments on her contemporaries that made her a favourite of the press. Politically, she supported the Republican Party only temporarily switching to become a Democrat support during the Kennedy and Johnson regime. 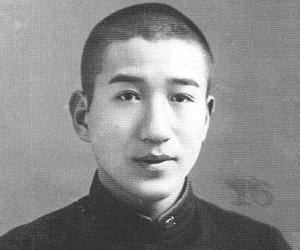 American Celebrities
American Women
Women Writers
Aquarius Writers
American Writers
Childhood & Early Life
Alice Lee Roosevelt was born to Alice and Theodore Roosevelt in New York City, New York. Her mother was a Boston banking heiress, while his father was a New York State Assemblyman.
Tragedy struck the Roosevelt household several hours after the birth of young Alice. First her paternal grandmother Martha Stewart ‘Mittie’ Bulloch died of typhoid fever and eleven hours later, her mother and Theodore wife Alice died due to an undiagnosed kidney failure.
Hysterical and extremely flustered by the tragic incidents, Theodore distanced himself from everything that reminded him of Alice Sr. Even he called young Alice by the name Baby Lee. It was due to this that later in life, she preferred to be addressed as Mrs. L.
To uplift himself emotionally, Theodore Roosevelt left New York, heading westwards. He spent the next two years travelling. He resided in North Dakota. As for Baby Lee, she was put under the guidance of Theodore’s sister, Anna.
Young Lee was extremely influenced by her aunt Anna throughout her stay. After the remarriage of her father to Edith Kermit Carow, she returned under the parental care of the two. She had five half-siblings, one sister and four brothers. 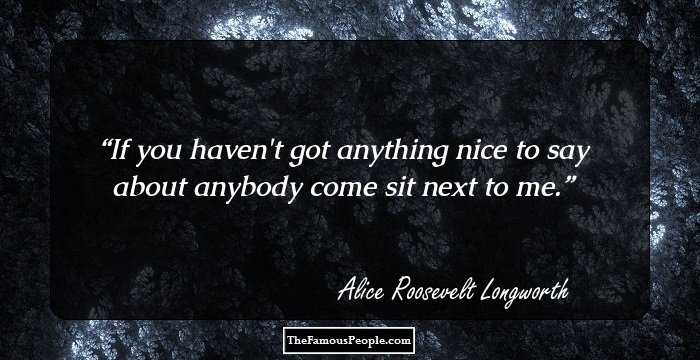 Quotes: You, Me
Continue Reading Below
You May Like

The Sexiest Men Of 2020, Ranked
Later Life
She did not share a very cordial relationship with either her father or step mother and thus would frequently visit Anna and her maternal grandparents George Cabot Lee and Caroline Watts Haskell in Boston. Anna, on the other hand, cast a strong influence on her and provided her with the required structure and stability.
She grew up to become a specimen of beauty like her own mother. She was spoiled with gifts and went on to become a fiercely independent and outgoing lay. She was also self-confident and calculating.
Upon her father’s appointment as the President of United States in 1901, she gained an overnight celebrity status. She became a fashion icon and a powerful, independent lady. She challenged the conformism and traditionalism at every step and broke all rules of the society.
She became the favourite subject for journalists and was all over the news but all for wrong reasons. She smoked cigarettes publically, rode in cars with men, partied till the wee hours of the morning, kept a pet snake named Emily Spinach and placed bets with a bookie.
In 1904, she embarked on a the Imperial Cruise to Japan, Hawaii, China, Phillipines and Korea along with 23 Congressmen, seven senators and other diplomats and officials. All throughout the trip, she kept the press busy around her, photographing with the Emperor of Japan, the Empress of China and attending sumo wrestling matches.
Throughout the presidency term of Roosevelt, she enjoyed being the center of attention.
After the death of her husband in 1931, she refused to stand in for the latter’s seat. During the Great Depression, she turned an author and penned an autobiography, ‘Crowded Hours’ which was well received by the public.
Throughout her life, she remained a member of the Republican Party and maintained herself both socially and politically. She served as a delegate to the Republican National Convention on a couple of occasions 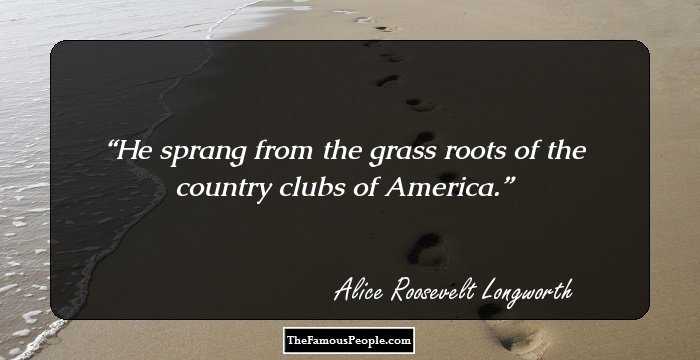 Personal Life & Legacy
Returning in 1905 from the diplomatic travels, she got engaged to Nicholas Longworth, a Republican U.S. House of Representatives member from Cincinnati, Ohio. Though she knew him since early on, their relationship strengthened during the tour.
The 1912 Bull Moose presidential election caused a rift between her and her husband due to the conflicting support. Her infidelity towards him was also a matter of concern in the relationship.
Her health declined in the 1950s. In 1955, she broke her hip by falling down. The following year, she was diagnosed with breast cancer. She underwent double mastectomy but later on suffered from health complications which led to weight loss, shortness of breath and cough.
She breathed her last on February 20, 1980 at age 96 due to emphysema and pneumonia and other chronic illnesses. She was interred in Rock Creek Cemetery, Washington, D.C.
Trivia
The eldest child of US President Theodore Roosevelt, she was the matron of honor at the wedding of cousin Eleanor Roosevelt 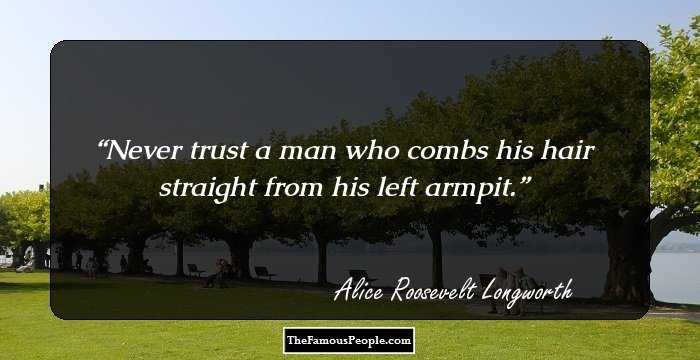 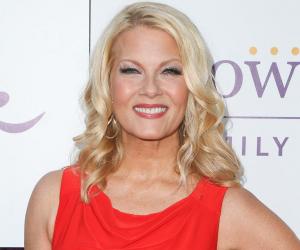