Acclaimed British comedian, Benny Hill, best known for his own program, ‘The Benny Hill Show’, earned an international cult following for his comedy. The show was immensely popular, running for more than three decades in more than 109 countries across the world. Born into a lower middle class family, Hill did many odd jobs for livelihood, including that of a milkman and a driver, before he got work as a stage manager. All through his teenage years, he had dreamt of making it big in the world of entertainment. In order to fulfil this dream, he came to London at the tender age of 16 to pursue a career in comedy. However, he could not connect with audiences while he was on stage and he wasn’t quite successful with his attempt on radio either. It was at television that he found success and fame. He began his career in television with the show, ‘Hi There’ and later went on to create the legendary TV comedy, ‘The Benny Hill Show’. He also appeared in a number of films. He never married all through his life.To learn more interesting and intriguing facts about his childhood, personal life and achievements, scroll down and continue to read this biography. British Celebrities
British Men
Male Comedians
British Comedians
British Film & Theater Personalities
Childhood & Early Life
Alfred Hawthorne Hill better known by his stage name, Benny Hill was born in Eastleigh, Hampshire, England.
Before he got a job as an assistant stage manager with a touring review, he did many jobs, including that of a bridge operator, milkman, drummer and a driver.
After his national service in the army during World War II, he came to London, where he took the stage name, Benny Hill. He soon began appearing in variety shows. 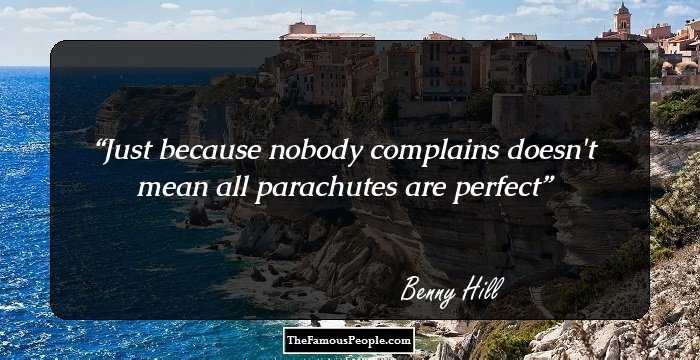 Who Is The Most Popular BTS Member?
Career
He was initially employed as a radio performer and it was in 1950 that he made his debut on the television screen, with the show ‘Hi There’. It was his artistic talent combined with great comic timing that earned him the TV break.
On January 15, 1955, he came out with the comedy show titled, 'The Benny Hill Show'. It was a show that showcased comedy in the forms of mime, slapstick, sketches parody and double-entendre.
In 1956, he played the role of 'Hugo Dill', a detective who goes on a mission, in the British comedy film, 'Who Done It?’ The film was directed by Basil Dearden.
In 1961, he came out with the comedy song titled, ‘Gather in the Mushrooms', which did well on the UK Singles Chart. That year he also released his comic song, 'Transistor Radio' and 'Pepys' Diary'.
In 1963, he came out with the short comedy song, ‘Harvest Of Love', which he also co-wrote and performed. The song did well on the UK Singles Chart.
In 1964, he played the role of ‘Nick Bottom' in the television film that was an adaptation of William Shakespeare's legendary play, 'A Midsummer Night's Dream'.
In 1964, he began to host his own radio programme titled, 'Benny Hill Time' on the BBC Radio's Light Programme. The programme went on for three seasons, running until 1966.
In 1965, he played the minor role of 'Fire Chief Perkins' in the British comedy film, 'Those Magnificent Men in their Flying Machines'. The film was directed by Ken Annakin.
In 1968, he appeared in the British musical film titled, ‘Chitty Chitty Bang Bang', which was based on the Ian Fleming novel 'Chitty-Chitty-Bang-Bang: The Magical Car'.
Continue Reading Below
In 1969, he played the role of 'Professor Simon Peach' in the British caper film titled, 'The Italian Job'. The film received mixed reviews. While some loved it, others were critical of it.
In 1971, he came out with the novelty song, 'Ernie (The Fastest Milkman in the West)’, which he wrote and performed. The song did immensely well, topping the charts.
In 1974, he starred in the film, 'The Best of Benny Hill ', which was a spinoff from his television show, 'The Benny Hill Show'. The film featured most of the episodes from the show.
In 1985, a computer game, ‘Benny Hill's Madcap Chase’, which was a ZX Spectrum videogame, featured him. The game was inspired by and loosely based on his ‘Thames TV’ show.
In 1986, he appeared in the video of 'Anything She Does', a song by the British rock band, 'Genesis'. The song was part of their hit album, 'Invisible Touch'.
In 1989, his television career came to an end, after the production of 'The Benny Hill Show' was cancelled due to heavy production costs and reduced show ratings.
In 1991, the last TV work of his career, 'Benny Hill's World Tour: New York!' was released. The show was taped in New York City and included many outdoor scenes. 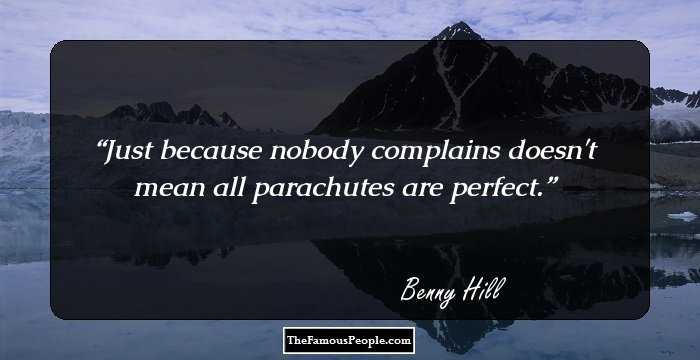 Major Works
Best known for his TV comedy show, 'The Benny Hill Show', a hit comedy show which ran from 1955 to 1991. The show was broadcasted in more than 109 countries across the world.
His novelty song, 'Ernie (The Fastest Milkman In The West)’ was immensely successful. The hit song topped the UK Singles Chart, reaching the Christmas number one spot.
Awards & Achievements
In 1972, he was the recipient of the BAFTA TV Award for the category of 'Best Script' for 'The Benny Hill Show'. 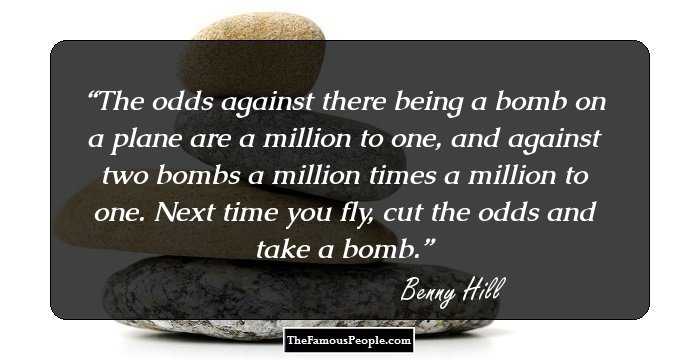 Personal Life & Legacy
He did not marry all his life nor did he father any children.
On February 24, 1992, he suffered a mild heart attack and was advised by doctors to get a heart bypass done. A week after, his kidneys failed and he died at the age of 68 on April 20 that year.
He was found dead in his flat, on his armchair. He had died while watching television. He was laid to rest at the Hollybrook Cemetery in Southampton.
Trivia
It was rumoured that this English comedian was buried along with gold jewellery. After he was buried, thieves made an attempt to dig his grave and take the jewellery.

See the events in life of Benny Hill in Chronological Order