Michael Palin is an English comedian, actor, writer, and television presenter. He is the second child of Mary Rachel Ovey and Edward Moreton Palin. His grandfather was Lieutenant-Colonel Richard Lockhart Ovey. He studied at the Shrewsbury School, and graduated from Brasenose College, Oxford with a degree in History. At college, he met Robert Hewison and Terry Jones. Palin and Jones became a team. They collaborated in writing lyrics for Barry Booth’s album “Diversions”. The duo wrote for The Frost Report along with other team members. The Palin-Jones team worked together for “The Late Show”, “A Series of Bird’s”, “Twice a Fortnight”, on the children’s comedy show “Do Not Adjust Your Set”, and for “The Complete and Utter History of Britain”. The duo composed songs including “The Lumberjack Song”, “Every Sperm is Sacred” and “Spam”. He presented the first of BBC’s travel series “Around the World in 80 Days” followed by seven other shows in the series. He supported the cause of sustainable transport, particularly in urban areas. Two trains were named in his honour. He is famous for his roles in Monty Python. He won the BAFTA Award for Best Actor in a Supporting Role for the movie “A Fish Called Wanda”. British People
Comedians
British Men
The University of Oxford
Taurus Actors
Childhood & Early Life
Palin was born on May 5, 1943 in Broomhill, Sheffield, West Riding of Yorkshire, England. He is the second child of Mary Rachel Ovey and Edward Moreton Palin. His father was an engineer working for a steel firm. His grandfather, Lieutenant-Colonel Richard Lockhart Ovey, was High Sheriff of Oxfordshire.
He started his education at Birkdale Preparatory School, Sheffield, and later attended Shrewsbury School. He was close to his sister Angela who was nine years older to him. 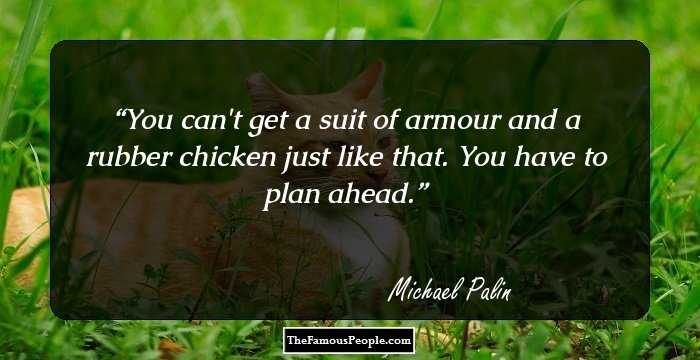 The Best Black Actresses Of All Time
Career & Later Life
In 1962, Palin joined the Brasenose College, Oxford, to study history. For Christmas celebrations, he wrote and performed comedy with fellow student Robert Hewison. College mate Terry Jones saw that performance, and joined them.
He graduated in 1965 and later became a presenter on a comedy pop show called “Now!” for Television Wales and the West. Terry Jones contacted him, and together they became a writing duo.
Palin and Jones wrote comedy for various BBC programs, such as The Ken Dodd Show, The Billy Cotton Bandshow, and The Illustrated Weekly Hudd. They collaborated in writing lyrics for Barry Booth’s album “Diversions”.
They wrote for ‘The Frost Report’ along with other team members including Frank Muir, Barry Cryer, Marty Feldman, Ronnie Barker, Ronnie Corbett, Dick Vosburgh, Graham Chapman, John Cleese and Eric Idle.
The Palin-Jones team wrote for “The Late Show” and “A series of Bird’s”. They worked as actors and writers on “Twice a Fortnight”, and the children’s comedy show “Do Not Adjust Your Set”.
John Cleese invited Palin to perform in “How to Irritate People” together with Graham Chapman and Tim Brooke-Taylor. Palin and Jones worked together for “The Complete and Utter History of Britain”.
He co-wrote sketches with Jones, and began the “Spanish Inquisition sketch”. The duo composed songs including “The Lumberjack Song”, “Every Sperm is Sacred” and “Spam”. His solo musical compositions included “Decomposing Composers” and “Finland”.
He starred as Dennis the Peasant in Terry Gilliam’s 1977 film “Jabberwocky”. He also appeared in “All You Need Is Cash” as Eric Manchester, the press agent for the Rutles.
In 1980, Palin co-wrote “Time Bandits” with Terry Gilliam, and also acted in the film. Two years later, he wrote and starred in “The Missionary”. Co-starring Maggie Smith, he plays the Reverend Charles Fortescue.
Continue Reading Below
In the 1980 BBC Television series “Great Railway Journeys of the World”, he travelled throughout the UK by train, from London to Kyle of Lochalsh, via Manchester, York, Newcastle upon Tyne, Edinburgh and Inverness.
Palin’s played a small part in “The Wind in the Willows”, a film directed by and starring Terry Jones. He also appeared with John Cleese in his documentary, “The Human Face”.
In 1989, he presented the first of BBC’s travel series “Around the World in 80 Days” travelling closely on the path described in the famous Jules Verne story without using an aircraft.
His BBC travel shows include “Pole to Pole”, “Full Circle with Michael Palin”, “Michael Palin’s Hemingway Adventure”, “Sahara with Michael Palin”, “Himalaya with Michael Palin”, “Michael Palin’s New Europe”, and “Brazil with Michael Palin”.
In 1991, he worked as producer and actor in the film “American Friends” based upon a real event in the life of his great grandfather, a fellow at St John’s College, Oxford.
In 1994, he travelled through Ireland for the series, titled “Derry to Kerry”. He attempted to trace his great grandmother, Brita Gallagher, who set sail from Ireland 150 years ago during the Great Famine. 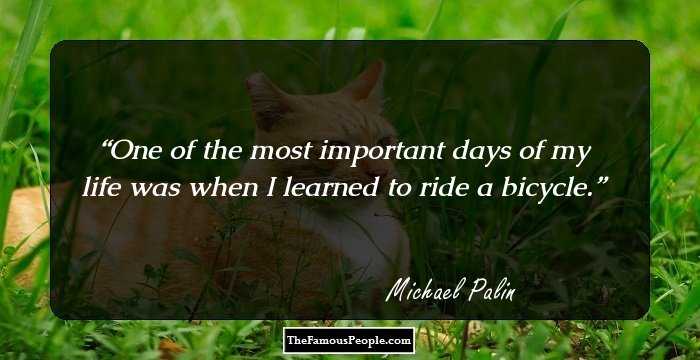 Quotes: Life, I
Major Works
In Monty Python, Palin played various roles such as the lumberjack of the Lumberjack Song, the Dead Parrot vendor, Cheese Shop proprietor, Postal Clerk, and inept characters such as Arthur Putey, and Mr. Anchovy.
He supported the cause of sustainable transport, particularly those relating to urban areas, and assisted Campaign for Better Transport and other campaigns. He has been president of the campaign since 1986.
Continue Reading Below
Awards & Achievements
Palin appeared in the comedy film “A Fish Called Wanda”, released in 1988, as the animal loving assassin Ken Pile. He won the BAFTA Award for Best Actor in a Supporting Role.
He was awarded the Commander of the Order of the British Empire or the CBE in the 2000 Queen’s Millennium Honors List for his services to television drama and travel documentaries.
In 2008, he received the James Joyce Award of the Literary and Historical Society in Dublin. The following year, he was awarded the Livingstone Medal of the Royal Scottish Geographical Society.
In 2013, he was made a BAFTA fellow, the highest honour that is conferred by the organisation. He was honoured with a gold medal for achievements in geography by the Royal Canadian Geographical Society. 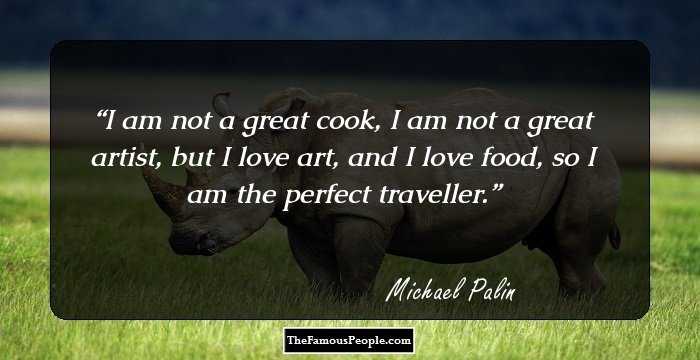 Quotes: Love, Art, I
Personal Life & Legacy
In 1966, he married Helen Gibbins whom he first met seven years earlier when on a holiday in Southwold, Suffolk. The couple have three children and a grandchild.
Virgin Trains’ high speed Super Voyager is named after him and ‘National Express East Anglia’ also named British Rail Class 153 after Michael Palin in honour of his achievements as a traveller.
Trivia
This writer-comedian and his crew would have been on one of the trains involved in the Clapham Junction rail crash had they not arrived ahead of schedule and caught an earlier train.

5. And Now for Something Completely Different (1971)

Quotes By Michael Palin | Quote Of The Day | Top 100 Quotes

See the events in life of Michael Palin in Chronological Order