(American Professional Soccer Player Who Plays as a Striker)

Advanced Search
Alex Morgan is an accomplished American soccer player who has achieved several feats including the Olympics Gold Medal in 2012 and the FIFA Women's World Cup with her team in 2015. She started her youth soccer with ‘Cypress Elite’ and then played for ‘California Golden Bears’ during college studies. She was drafted numero uno by ‘Western New York Flash’ during 2011 WPS Draft and she went on to contribute to the team’s league championship win. Over the years, she has played for several clubs including ‘Portland Thorns FC’ and ‘West Coast FC’. During 2011 FIFA Women's World Cup, she became youngest player of the US women's national soccer team, where she presently plays as a forward. She scored the game-winning goal against Canada during semi-final of 2012 London Olympics. She achieved the feat of scoring 28 goals and collecting 21 assists in 2012, becoming the youngest US player to score 20 goals in a year. That year she was named US Soccer Female Athlete of the Year. Presently, a forward for ‘Orlando Pride’ and ‘Olympique Lyonnais’, she has also garnered recognition for her off-the-field pursuits including writing a four-book series and featuring in TV, magazines, and endorsements. Colton Underwood
DID WE MISS SOMEONE?
CLICK HERE AND TELL US
WE'LL MAKE SURE
THEY'RE HERE A.S.A.P
Quick Facts

American People
American Women
University Of California, Berkeley
Women Sportspersons
Cancer Football Players
Childhood & Early Life
Alex Morgan was born Alexandra Patricia Morgan Carrasco on July 2, 1989, in San Dimas, California, US to Michael T. Morgan and Pamela S. She grew up in the city of Diamond Bar with her elder sisters, Jeni and Jeri.
A multisport athlete in her childhood, she studied at ‘Diamond Bar High School’ where she displayed potential in speed and sprinting and thrice remained an all-league pick. ‘National Soccer Coaches Association of America’ named her All-American.
She joined ‘Cypress Elite’ at 14 years of age marking her debut in club soccer. She was part of the club team winning under-16 Coast Soccer League championship and attained third position in the club team’s under-19 level.
She was selected to the United States under-20 women's national soccer team at age 17, but due to an anterior cruciate ligament (ACL) injury, she could not play with the team until April 2008.
She also joined the regional and state teams of ‘Olympic Development Program’ (ODP).
She completed her college studies from University of California, Berkeley, one semester early, obtaining a degree in Political Economy. She joined ‘California Golden Bears’ and played from 2007 to 2010. While in her junior year, she became the first Californian player to emerge among the top three finalists for the ‘Hermann Trophy’.
She marked her international debut at the 2008 CONCACAF Women's U-20 Championship held in Puebla, Mexico, where playing against Cuba she made her first international goal.
She played in the 2008 FIFA U-20 Women's World Cup where her fourth goal of the tournament not only helped the US team to win the tournament but was also marked as the tournament’s best goal and subsequently the year’s second best for ‘FIFA’. She became the third highest scorer and the second best player of the tournament and this earned her a Bronze Shoe and a Silver Ball respectively.
Meanwhile, she led the Golden Bears to the NCAA Tournament successively for four years while moving to the second round twice. She completed her Berkley career during the fall of 2010 ranking third in the all-time goals scored list with 45 goals and also in points with 107. 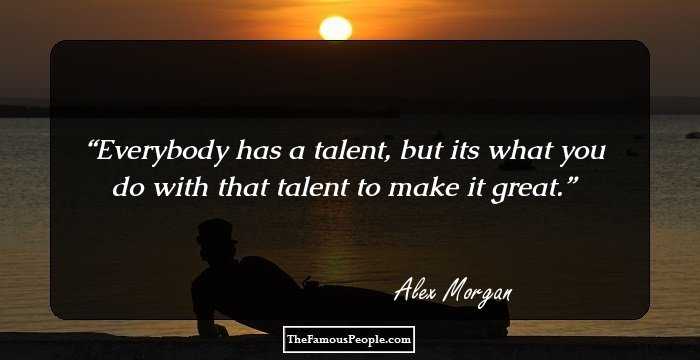 Quotes: You
Continue Reading Below
Career
Her first international appearance as a senior national team player happened in March 2010 when she played as a substitute against Mexico. Her first international goal also came while playing against China as a substitute in October that year.
In November 2010, she scored a goal against Italy in a vital game regarded the most significant goal of her career so far that helped the US team qualify for the final of FIFA Women's World Cup.
‘Western New York Flash’ drafted her numero uno in the 2011 WPS Draft on January 14, 2011. She scored 4 goals in the 14 matches she played for the club that season. The club won that year’s WPS Championship title as also the regular season title.
At age 22, Morgan became the youngest US player during the 2011 FIFA Women's World Cup where the team emerged runner up winning silver. Her first goal in the tournament came against France on July 13 in the semi-final match.
She scored her first FIFA World Cup Final goal against Japan in 2011 and became the first player to score a goal as well as collect an assist in a World Cup final.
She joined ‘Seattle Sounders Women’ in 2012 and appeared only thrice for the club. She helped the US team to enter the final of that year’s Summer Olympics by scoring the game-winning goal against Canada in the semis. The US team emerged winners earning Morgan an Olympic gold medal.
The year 2012 saw her scoring 28 goals and collecting 21 assists thus becoming one of the two American women along with Mia Hamm to score 20 goals and collect 20 assists in a year as also the youngest and 6th US player to score 20 goals in a year.
In 2012, she was honoured with the U.S. Soccer Female Athlete of the Year.
She became the CONCACAF Female Player of the Year in 2013. She played for the newly established Portland Thorns FC from 2013 to 2015, where she joined on January 11, 2013, through National Women's Soccer League (NWSL) Player Allocation.
Portland Thorns won the NWSL Championship on August 31, 2013 while Morgan’s performance saw her name in the NWSL Second XI team on August 28 that year.
Thorns traded her to ‘Orlando Pride’, an exchange process that was declared on October 26, 2015. That year, she remained part of the US national team that lifted the FIFA Women's World Cup.
Her feats also include being part of the US national team that won the Four Nations Tournament in 2011; Algarve Cup in 2011, 2013 and 2015; CONCACAF Women's Olympic Qualifying Tournament in 2012 and 2016; CONCACAF Women's Championship in 2014; and She Believes Cup in 2016. She won the golden boot for her performance during Algarve Cup 2011.
She signed with ‘Olympique Lyonnais’ on January 5, 2017.
Her off-the-field endeavours include foraying as a novelist with Simon & Schuster in writing the middle-grade four-book series ‘The Kicks’; featuring in endorsements of big brands like ‘Nike’, ‘Coca-Cola’ and ‘Panasonic’; featuring in magazines like ‘ESPN The Magazine’, ‘Vogue’, ‘Health’ and ‘Fortune’; and appearing in TV commercials and programs.
Live-action kids comedy series ‘The Kicks’ that airs on Amazon Prime since 2015 is based on her four-book series ‘The Kicks’. 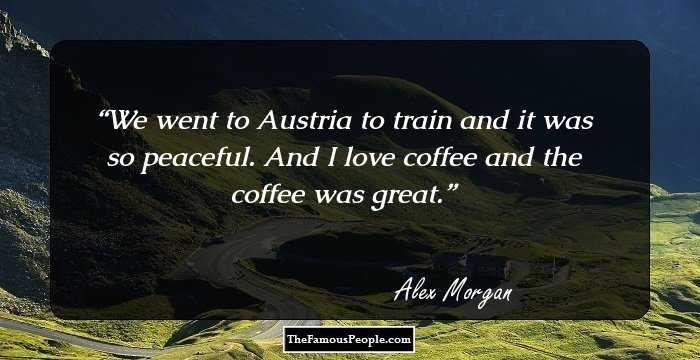 Quotes By Alex Morgan | Quote Of The Day | Top 100 Quotes

See the events in life of Alex Morgan in Chronological Order