Alan Shearer is a retired English footballer who was regarded as one of the world’s best strikers. Recognized for his skills at a tender age of thirteen, Shearer went on to play for various clubs such as Southampton, Blackburn Rovers and Newcastle United in a career spanning two decades. He also represented England in the 1998 FIFA World Cup. Other than just being known as a good player, he is also famous for being purchased by various clubs for huge amounts of money. Alan has scored around 49 of his 206 goals for Newcastle only by headshots, a feat which is rarely achieved by most footballers. He is associated with various charities and even during his days as a footballer, he took time out for charitable causes. He was associated with the organisation NSPCC, which works towards the protection of children from any form of abuse. He also raised money for this organisation through various football matches. Alan has also started his own charity organisation ‘The Alan Shearer Foundation’. In his playing days he was considered to be one of the richest footballers around the globe and still holds this reputation, even after his retirement. He continues be associated with the sport by giving his opinions through post match discussions on national television. Wayne Rooney
Football Players #29
Sportspersons #293
DID WE MISS SOMEONE?
CLICK HERE AND TELL US
WE'LL MAKE SURE
THEY'RE HERE A.S.A.P
Quick Facts

British People
British Men
Tall Celebrities
Tall Male Celebrities
Male Sportspersons
Childhood & Early Life
Alan Shearer was born on 13 August 1970 to Anne and Alan Shearer. It was Alan’s father who realised that his son had great potential of being a good footballer, and let his son pursue his dream.
Shearer completed his basic education from Gosforth Central Middle School, and later from Gosforth High School. He very played football throughout this schooling period, and was also the captain of the school team.
Shearer football skills soon got the attention of Jack Hixon, Southampton’s football talent scout. It’s said that it was Hixon who shaped Shearer into the great footballer he eventually went on to become. 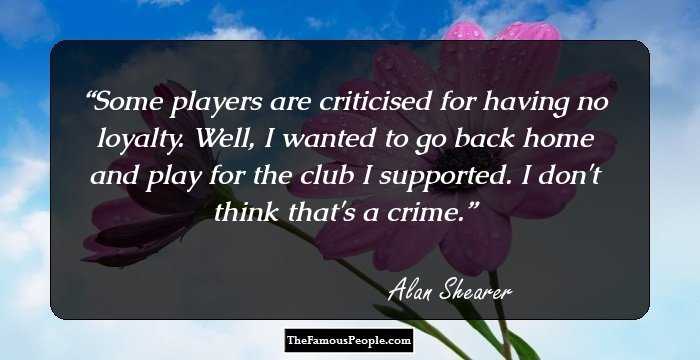 Quotes: Think, Home
Continue Reading Below
You May Like

Who Is The Most Popular BTS Member?
Career
After playing for various football clubs such as Manchester City and New Castle United, Shearer signed a contract with the famous ‘Southampton Football Club’ in 1986. This turned to become a great boost for Shearer, who had then just started his career.
His first on-field appearance was as a substitute in a match against Chelsea, this performance went largely unnoticed. Shearer took the football world by storm after he scored 3 goals for his team, in a match against Arsenal. Southampton won the match 4-2, and Alan became the youngest player to score a hat-trick in the top division. He was 17 years, 240 days old at that time.
Shearer was selected for the Under-21 English National Team, in 1991. Shearer went on to score 7 goals in the four matches he played for the team that year. In the next one year Alan scored around 13 goals in the 41 matches he played.
Shearer drew a lot of attention from the football fraternity for his style of playing. He was later acquired by the prestigious ‘Blackburn Rovers’ club in 1992, for a whopping 3.6 million Euros. He scored 16 goals in the 21 matches he played that year.
He intermittently took part in the England's qualifying campaign for the 1994 FIFA World Cup due to injury and the team failed to qualify for the World Cup. .
In 1995, Shearer achieved a remarkable feat of scoring 100 goals for the club ‘Blackburn Rovers’. His last appearance for the club was for the Euro Cup held the very next year.
Post the Euro cup of 1996, Alan Shearer was acquired by the prestigious club ‘Newcastle United’. Alan was reportedly bought for around 15 million Euros, the highest any footballer was paid at the time. In his very first season for Newcastle, Shearer went on to score 25 goals in the 31 matches he played.
One of Shearer’s best times was the football season of 1998. He was not just free of injuries during this period, but also captained his team Newcastle United during this period. He scored around 14 goals during this period and helped his team greatly in reaching the FA cup semi-finals.
He was part of the English team that played in the 1998 FIFA World Cup. England was defeated by Argentina in penalty shootout in the second round of the tournament. Both the teams were tied 2–2 at the end the game and Shearer was one of the scorers for England in the game. This was Shearer’s only World Cup tournament.
Continue Reading Below
In a 1999 match against the club ‘Sheffield’, Shearer went on to score 5 goals, defeating the opposition by 8-0 margin. He also received his first red card that year while playing his 100th match for Newcastle United.
Alan Shearer retired in 2006 after playing 395 matches for his club Newcastle United. He also frequently fell prey to injuries, the latest being a ligament tear which also influenced the decision.
Post his retirement Alan became the manager of his club Newcastle United, in 2009. However, he didn’t continue for long, and was replaced by Chris Hughton. 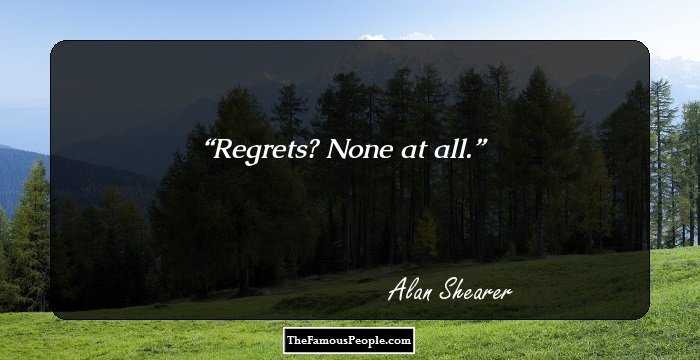 Awards & Achievements
Newcastle United honoured Alan Shearer by installing a 25 metre high banner of him at their home ground St. James Park. The words ‘Thanks for 10 great years’ are printed on this banner.
Shearer received the ‘Honorary Freedom’ award in 2000, from the governing body of ‘Newcastle upon Tyne’ for his outstanding contribution towards football.
The Vice Chancellor of Northumbria University awarded Alan Shearer in 2006. The award was an honorary doctorate in Civil Law for the immense hard work and dedication he had showed towards football.
Personal Life & Legacy
Shearer married Lainya on 8 June 1991. The couple have 2 daughters, namely Hollie and Chloe Shearer. 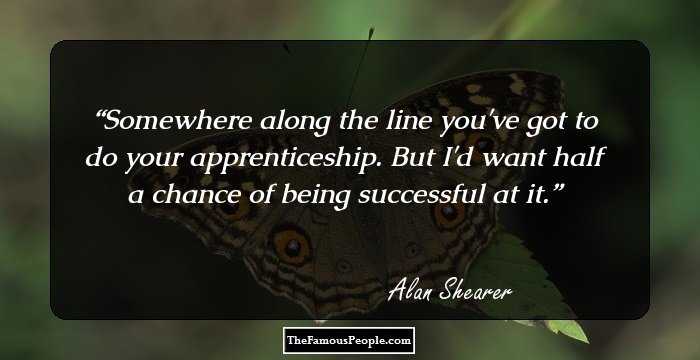 Quotes: You
Trivia
Alan has played alongside the poster boy of world football, David Beckham, for four years, from 1996 to 2000.
You May Like

Quotes By Alan Shearer | Quote Of The Day | Top 100 Quotes

See the events in life of Alan Shearer in Chronological Order