Wayne Rooney is a former English footballer widely regarded as England’s best player. He is currently the manager of English Football League Championship club ‘Derby County Football Club’. He was one of the world’s most popular football players and has been named the ‘England Player of the Year’ four times. He scored 99 goals for a local junior league team at the age of nine which led to the ‘Everton Football Club’ signing a contract with him. He made his professional debut with ‘Everton’ in 2002, and within weeks became the youngest-ever goal-scorer in the history of premier league, a record which has now been surpassed. In 2004, he signed a contract with ‘Manchester United’ and found great success with them. His career with ‘Manchester United’ began in a great way; he scored an unforgettable hat-trick against ‘Fenerbahce’ in the ‘Champions League.’ By the end of the 2004-05 season, Rooney had amassed 17 goals in 43 appearances. He played in the 2006, 2010, 2014, and 2018 ‘World Cups’ for his national team. He helped ‘Manchester United’ win four ‘Premier League’ titles in five seasons. British People
British Men
Male Sportspersons
British Sportspersons
Scorpio Football Players
Childhood & Early Life
Wayne Rooney was born on 24 October 1985, in Croxteth, England, to Thomas Wayne Rooney and his wife Jeanette Marie. He is of Irish descent. He has two younger brothers.
He attended Our Lady and St Swithin’s primary school and later went to ‘The De La Salle Academy.’ During his childhood, he became a supporter of his local club ‘Everton’ with which he signed a contract in 2002. 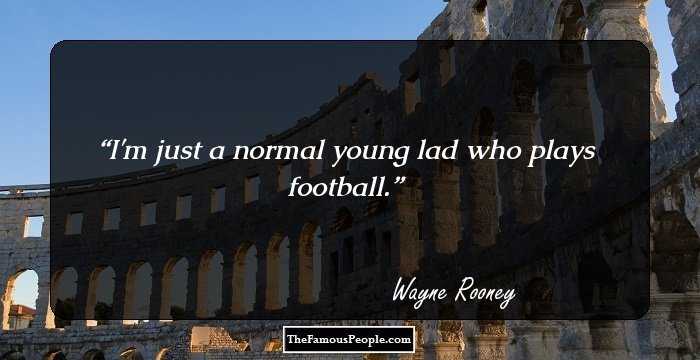 Continue Reading Below
Career
He made his debut for ‘Manchester United’ in 2004-05 in a home game against ‘Fenerbahce’ in the ‘UEFA Championship League.’ He scored a hat-trick in a 6-2 victory and was hailed as a sensational debutant.
In the 2006 ‘League Cup,’ he scored twice in his team’s 4-0 win over ‘Wigan Athletic’ in the final. He was named man of the match. He had amassed 16 goals in 26 ‘Premier League’ games in the 2005-06 season.
He did not have a great beginning in the first half of the 2006-07 season, but his form improved later on. He scored a hat-trick against ‘Bolton Wanderers,’ and by the end of the season, he had scored 14 league goals.

In the 2007-08 season, Wayne Rooney missed many matches due to injuries. However, he finished the season with 18 goals and played a part in his team’s victory over ‘Chelsea’ and helped ‘Manchester United’ clinch the ‘Champions League.’

He became the youngest player in the history of the league to make 200 appearances when he played against the ‘Blackburn Rovers’ in October 2008. In 2009, he scored his final league goal of the season against ‘Tottenham.’ Overall, he scored 20 goals in the 2008-09 season.
He scored a hat-trick—his first in three years—in an away match against ‘Portsmouth’ in 2009. In 2010, he scored four goals in his team’s win over ‘Hull City.’ This was the first time he had scored four goals in a match. Rooney scored his 100th ‘Premier League’ goal in a 3-1 win over ‘Arsenal’ in the same season.
In a February 2011 match against ‘Manchester City,’ he scored an overhead volley which proved to be the winning goal in their 2-1 win. Within a few weeks, he scored his third goal in a 4-0 win over ‘Wigan Athletic.’ In April the same year, he scored his first hat-trick of the season in a 4-2 away win over ‘West Ham United.’
During the 2011-12 season, Rooney guided his team to a 8-2 win over ‘Arsenal’ by scoring a hat-trick. The first goal of the hat-trick was also his 150th goal for ‘Manchester United.’ He scored a hat-trick in his next game as well; in a 5-0 away win over ‘Bolton Wanderers.’
He scored his first goal of the 2012-13 season in a 4-2 league win over ‘Stoke City.’ In December 2012, he scored twice against ‘Reading’ in a 4-3 win. In January 2013, he scored twice in a 2-1 win over ‘Southampton.’
Continue Reading Below
In September 2013, he scored his 200th goal for ‘Manchester United’ in a 4-2 victory against ‘Bayer Leverkusen.’ In March the following year, he became the third all-time leading scorer for ‘Manchester United’ with 212 career goals.
He was made the club’s captain after the exit of Nemanja Vidić in July 2014. He then went on to become the third-highest ‘Premier League’ goal scorer. He finished the 2014-15 season with 14 goals in 37 appearances.
In August 2015, he scored a hat-trick against ‘Club Brugge,’ ending his 878 minute scoreless streak. In his 500th game for ‘Manchester,’ his team suffered a 2-1 home loss against ‘Norwich City.’
As the captain, he led his team to victory in the 2016 ‘FA Cup’ final against ‘Crystal Palace.’ On January 17, 2017, he equaled the former ‘Manchester United’ player Bobby Charlton to become their top-scorer of all time and eventually surpassed him with his 250th goal for the club.
He returned to his boyhood club ‘Everton’ in 2017 with a two-year contract and made his official appearance for the club in a 1-0 win against ‘MFK Ružomberok.’ He scored his first hat-trick for ‘Everton’ in 4-0 win against ‘West Ham.’
He signed a three-and-a-half-year contract with the ‘Major League Soccer’ club ‘D.C United’ and made his debut against ‘Vancouver Whitecaps’ in a 3-1 win. He was named the ‘MSL Player of the Year,’ thanks to his impressive performance with the club and his amazing game-winning pass in a match against ‘Orlando’ in August 2018.
With two years still remaining on his contract with the ‘Major League Soccer’ club ‘D.C United,’ Wayne Rooney agreed to return to England to join the ‘EFL Championship’ side ‘Derby County.’ He was named captain of the side and made his debut on 2 January 2020, helping his team to a 2–1 victory against ‘Barnsley.’

In 2021, he retired as a competitive player and became the manager of the ‘Derby County’. 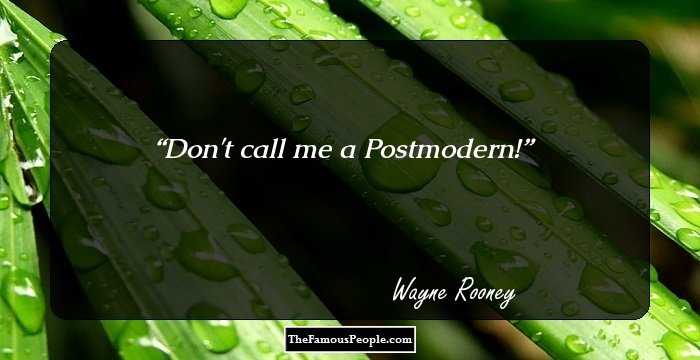 Continue Reading Below
Awards & Achievements
He won ‘The BBC Young Sports Personality of the Year’ in 2002 for being "touted by many as the most promising English football talent to have surfaced in recent years."
He was adjudged ‘PFA Young Player of the Year’ for two seasons (2004-05 and 2005-06). This award is given annually by ‘Professional Footballers' Association’ to the best player aged 23 or below.
He has been awarded the ‘England Player of the Year Award’ four times (2008, 2009, 2014, and 2015). This award is presented by ‘The Football Association’ to outstanding performers of the England national team.
Rooney’s brilliant hat-trick on his debut is certainly one of his best performances. In his first appearance for ‘Manchester United,’ he scored three goals in a ‘Champions League’ match against ‘Fenerbahce’ in 2004, helping his team to a 6-2 victory.
In the 2006 ‘Champions League’ final against ‘Wigan Athletic,’ he scored the opening goal of the match as well as the final goal to guide ‘Manchester United’ to a 4-0 win. Rooney was named ‘Man of the Match’ for his brilliant performance.
In Manchester United’s ‘Premier League’ match against ‘Tottenham’ in 2009, his team was trailing 2-0 at half time. Rooney fought back in the second half by scoring two goals and assisting two goals. His team bounced back to win the match 5-2.
He scored the winning goal in the semi-final of the 2010 ‘Carling Cup’ when ‘Manchester United’ and ‘Manchester City’ were tied at 3-3 in stoppage time. His goal brought the score to 4-3, enabling his team to enter the final.

Personal Life
He is married to his high school sweetheart Coleen. They have four sons, namely Kai Wayne (born 2009), Klay Anthony (born 2013), Kit Joseph (born 2016), and Cass Mac Rooney (born 2018). His marriage hit a rocky patch when details regarding his flings with prostitutes emerged, but the couple has reconciled and is living happily with their children. 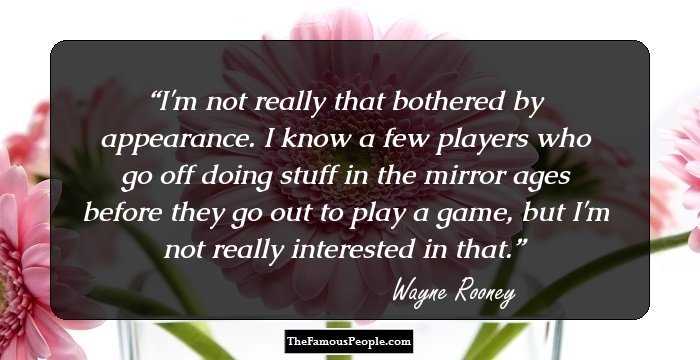 Trivia
He is only the fourth player in ‘Premier League’ history to score a hat-trick in consecutive games.
He has a tattoo of the words "Just Enough Education to Perform," the title of an album by his favorite Welsh rock band, ‘Stereophonics.’

He suffers from hair loss problems and has had two hair transplants so far. He was notorious for his on-field temper.

Quotes By Wayne Rooney | Quote Of The Day | Top 100 Quotes

See the events in life of Wayne Rooney in Chronological Order