Bamidele Jermaine Alli, also known as Dele Alli, is an English professional footballer. He started his professional career with ‘MK Dons’ and is presently with ‘Tottenham Hotspur.’ He was born into a broken family and was raised by foster parents. However, he fought against all odds to fulfil his dream of becoming a professional footballer. He has represented the English ‘Under-17,’ ‘Under 18,’ ‘Under 19,’ and ‘Under 21’ teams and is presently a member of the English senior national team. He was approached to play for his father’s native country, Nigeria, but could not do so because of his commitments with the English team. His professional career started with the youth team of ‘City Colts,’ after which he spent a considerable time with ‘Milton Keynes Dons’ (MK Dons), till he was transferred to ‘Tottenham Hotspur.’ He has consistently been named the ‘Young Player of the Year’ and has figured in the ‘PFA Team of the Year’ since 2014. Due to his strained relationship with his parents, he has dropped his surname “Alli” from his jersey and now goes by just “Dele.” His girlfriend, Ruby Mae, has been a major influence on his personal life and is a source of inspiration for him. British People
Black Football Players
British Men
Tall Celebrities
Tall Male Celebrities
Childhood & Early Life
Dele was born Bamidele Jermaine Alli, on April 11, 1996, in Milton Keynes, Buckinghamshire, England. His father, Kenny, was Nigerian, and his mother, Denise, was English. His parents divorced after Dele’s birth and his father moved to the US soon after, due to which he was initially raised by his mother. She had three other children from different fathers.
He studied at the ‘Stantonbury Campus,’ located in north Milton Keynes, and ‘The Radcliffe School’ in Wolverton. His mother suffered from alcoholism, due to which he moved into the family of Alan and Sally Hickford at the age of 13. Although he was not legally adopted, he refers to them as his “adoptive parents” and grew up with their son, who also played football for ‘MK Dons’ with him.
Alli became a member of the youth team of ‘MK Dons’ at the age of 11. By the time he was 16 years old, he had made his debut with their first string team. He scored his first goal against ‘Cambridge’ and made his league debut in a game against ‘Coventry City’ in December 2012.
He has made several appearances for the English ‘Under-17,’ ‘Under-18,’ ‘Under-19,’ and ‘Under-21’ teams. He played his first game for the English ‘Under-19’ team in a draw against Germany, during which he assisted a goal by Bradley Fewster.
Continue Reading Below
You May Like

Who Is The Most Popular BTS Member?
Career
He became a regular player for ‘MK Dons’ in the 2013–2014 season. Alli scored against ‘Northampton Town’ in his first ‘Football League Trophy’ appearance to help his team clinch a 2–0 win. He scored his first professional league goal in a match against ‘Stevenage.’
He suffered a setback during the latter half of 2013, due to an injury, but came back to score the opening goal for his club in 2014 against ‘Shrewsbury Town.’ He scored a hat-trick at the age of 17 to help ‘MK Dons’ clinch a 3–1 victory over ‘Notts County’ at the ‘Meadow Lane’ stadium. In his 37 appearances during the season, he scored seven times, thus becoming a valuable player of the team.
He continued his good form during the 2014–2015 season with the ‘Dons.’ He played in the centre midfield and scored repeatedly against ‘Gillingham,’ ‘AFC Wimbledon,’ ‘Peterborough United,’ and ‘Crawley Town.’ He scored his second hat-trick in a match against ‘Crewe Alexandra’ and was awarded the ‘Man of the Match.’
In February 2015, he signed a five-and-a-half-year contract worth £ 5 million with ‘Tottenham Hotspur.’ However, he continued to play for the ‘Dons’ on loan for the rest of the season. ‘MK Dons’ ended as the runners-up in the league.
In August 2015, he made his debut in the ‘Premier League’ for ‘Tottenham,’ in a match against ‘Manchester United,’ as a substitute in the last 13 minutes. He scored his first goal for the team against ‘Leicester City’ and soon became a regular starter for the team. He ended the season with a brace against ‘Stoke City’ that got him voted as the season’s ‘PFA Young Player of the Year.’
He scored his first goal of the 2016–2017 season against ‘Stoke City’ and went on to score 8 goals in 6 league matches. In February 2017, he was shown his first red card for playing dangerously against ‘KAA Gent.’ However, his good form continued and he was featured in the ‘PFA Team of the Year.’
He made his debut as a substitute in the English team against Estonia in a ‘UEFA Euro’ qualifying match in October 2015. A month later, he made his first start for the senior national team and scored an opening goal against France at the ‘Wembley Stadium.’ He was named the ‘Man of the Match’ in a 3–2 win against the world champions, Germany, in March 2016.
Teams Played For
During his youth career, he has played for ‘City Colts’ for a while in 2007 and then for ‘MK Dons’ for the rest of 2007. He continued to play for the youth team of ‘MK Dons’ till 2011.
In his senior career, he played for ‘MK Dons’ from 2011 to 2015 and was then transferred to ‘Tottenham Hotspur.’ However, he continued to play on loan with ‘MK Dons’ during the latter half of 2015.
Continue Reading Below
He has represented the English ‘Under-17,’ ‘Under-18,’ ‘Under-19,’ and ‘Under-21’ teams from 2012 to 2015.
He has been playing for the English senior national team from 2015 to date.
Awards & Achievements
He was part of the ‘MK Dons’ squad that ended as the runners-up in the 2014–2015 ‘Football League.’
He was named the ‘Football League’s Young Player of the Month’ in August 2014 and January 2015 and the ‘Young Player of the Year’ for the 2014–2015 season.
He was also the ‘PFA Young Player of the Year’ in the 2015–2016 and the 2016–2017 seasons.
He scored the ‘BBC Goal of the Season’ in the 2015–2016 season.
Alli was named the ‘Premier League Player of the Month’ in January 2017.
He was also included in the ‘PFA Team of the Year’ in the 2014–2015 ‘League One,’ the 2015–2016 ‘Premier League,’ and the 2016–2017 ‘Premier League’ seasons.
Personal Life
He grew up as a fan of ‘Liverpool FC’ and idolized midfielder Steven Gerrard. He was also a fan of ‘Chelsea’ scorer Frank Lampard. He is known to closely watch and study the playing tactics of great players such as Lionel Messi, Andrés Iniesta, and Xabi Alonso to improve his own game.
His father remarried in the US, but Dele did not get along with his stepmother. In 2016, he dropped his surname “Alli,” as he did not want to maintain the connection with his family. Some say that it was his girlfriend, Ruby Mae, who had prompted him to do so.
Trivia
He was approached by former Nigerian footballer, John Fashanu, to play for Nigeria in the beginning of 2015. However, he was inducted into the English squad for the ‘UEFA Euro 2016’ qualifying matches and could not play for Nigeria.
In the 2015–2016 season, he was banned for 3 matches for punching ‘West Bromwich Albion’ midfielder Claudio Yacob in the stomach. He later apologized for the incident.
He has also received several warnings for diving and simulation and has been accused of blatant cheating by some of his critics.

See the events in life of Dele Alli in Chronological Order 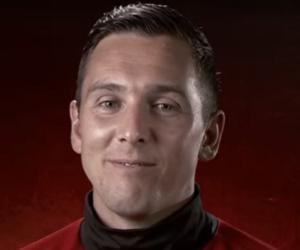