Alan Greenspan is an American economist who served as chairman of the Federal Reserve of the U.S from 1987 to 2006. He had a successful consulting career before he was appointed chairman by President Ronald Reagan and reappointed at successive four year intervals until his retirement, the second longest tenure in the position. A close friend of Ayn Rand, he was greatly influenced by her thoughts and concepts. He adopted her philosophy of individual effort, self-interest and laissez-faire capitalism. As the Chairman of the Council of Economic Advisers, during Gerald Ford’s presidency, he promoted policies that caused the rate of inflation to drop drastically. As the Chairman of the Federal Reserve Board, his monetary policy was aimed at avoiding the dangers of inflation and recession. He realized that the rates of growth and the stock prices would attain a point of saturation and warned the public about it. He is credited with longest official economic expansion in American history. He was recognized as one of the most powerful and influential persons internationally and has been conferred many awards and honors. However, in 2011 his image took a beating when the Financial Crisis Inquiry Commission found many of his policies to be detrimental in the long run. Chrysippus
Intellectuals & Academics #166
DID WE MISS SOMEONE?
CLICK HERE AND TELL US
WE'LL MAKE SURE
THEY'RE HERE A.S.A.P
Quick Facts

American People
Columbia University
New York University
American Intellectuals & Academics
Pisces Men
Childhood & Early Life
Alan Greenspan was born in the Washington Heights, New York City, to Herbert Greenspan, a stockbroker and market analyst in New York City and Rose Goldsmith. He was of Jewish descent.
He graduated from George Washington High School in 1943 and joined the prestigious Julliard School to study clarinet which he had been playing with his high school mate, Stan Getz.
He earned a B.S. degree in economics in 1948 and an M.A. degree in economics two years later from New York University. He then enrolled to Columbia University for advance economic studies, but later dropped out. 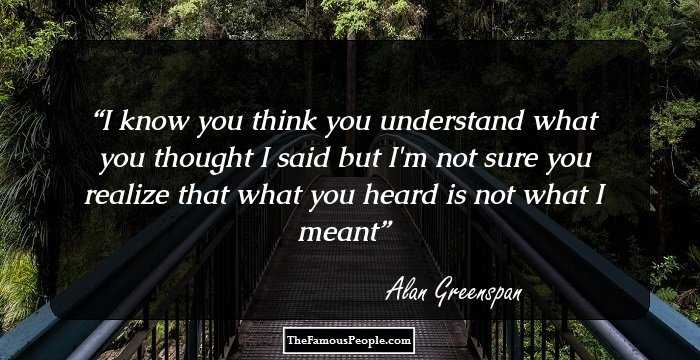 Famous Beautiful Women With Green Eyes
Career
While studying at the New York University, Greenspan joined the Wall Street investment bank ‘Brown Brothers Harriman’ under Eugene Banks, a managing director, in the firm's equity research department.
From 1948 to 1953, he served as an economic analyst at ‘The National Industrial Conference Board’. The board was a business and industry association in New York City.
In 1954, he became a partner with William Townsend in the consulting firm, ‘Townsend-Greenspan & Co., Inc.’ When Townsend died four years later he bought out his share and became the president of the company.
In 1968, he was introduced to Richard Nixon by a friend and helped Nixon during his presidential election campaign. However, he turned down positions in the administration after Nixon won the election.
He was appointed to the Commission for an All-Volunteer Armed Forces, commonly known as the Gates Commission, in March 1969. The Gates Commission recommended that the military draft be abolished.
In 1974, President Nixon appointed him head of his Council of Economic Advisers. Nixon’s successor, Ford didn’t change his appointment which eventually ended when Carter became President of the United States.
In 1981, President Reagan appointed him the chairman of the newly constituted National Commission on Social Security Reform. Two years later, the Greenspan Commission issued its report on Social Security reform.
In 1987, Reagan appointed him Chairman of the Board of Governors of the Federal Reserve, following the resignation of Chairman Paul Volcker. Many felt that he had lobbied to get this chairmanship.
In 1991, President Bush nominated him for a second term as Fed chairman and for a full 14-year term as a member of the Fed's Board of Governors which was confirmed by the Senate.
Continue Reading Below
President Clinton also appointed him as Fed chairman for his third and fourth tenures. His appointment by President George W. Bush for a fifth term ended in 2006.
In 2011, the ‘Financial Crisis Inquiry Commission’ declared that the global financial crisis three years earlier was due to his failure to curtail trade of securities during the housing bubble and his financial deregulation. 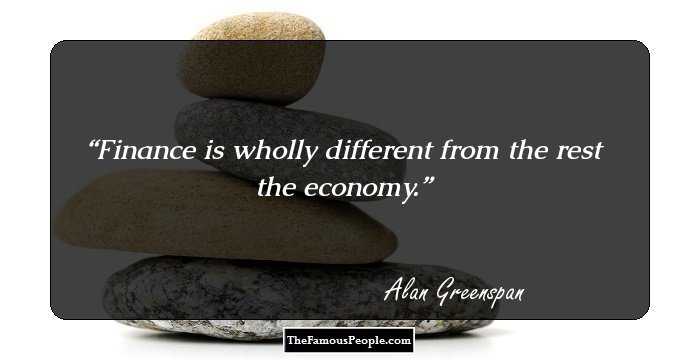 Major Works
In 1987, ‘The Dow Jones Industrial Average’ fell a record 508 points. Greenspan who had just taken over command at the Fed, acted quickly to ensure liquidity in the markets.
The Asian economies experienced a financial crisis and economic slowdown in 1987. He lowered the U.S interest rates to protect the economy, and hiked it two years later when the Asian economies recovered.
Awards & Achievements
Greenspan was awarded ‘Presidential Medal of Freedom’, the highest civilian award in the United States, by President George W. Bush in 2005. He was also honored with the Department of Defense Medal for Distinguished Public Service
He was made the ‘Commander of the Legion of Honor’ by the French government in 2000 and the ‘Knight Commander of the Order of the British Empire’, two years later.
According to the official Federal Reserve biography, he has received honorary degrees from Harvard, Yale, Pennsylvania, Leuven (Belgium), Notre Dame, Wake Forest, and Colgate universities. 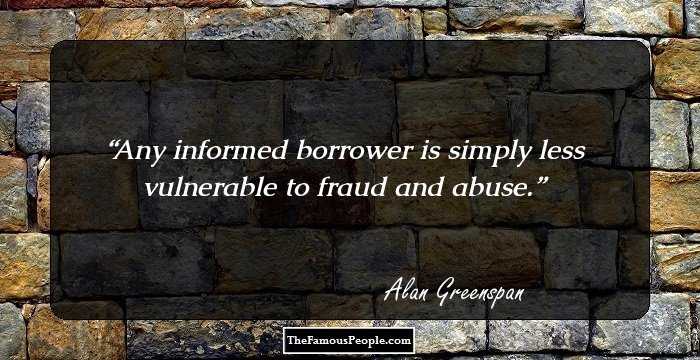 Personal Life & Legacy
Greenspan married twice — first briefly to Joan Mitchell and then in 1997, he married Andrea Mitchell, a NBC reporter twenty years younger. This was Andrea’s second marriage too.
He has a net worth of $10 million and he owns his own consulting company - Greenspan Associates LLC, where he works as a private advisor to various firms.
Trivia
This American economist claims that he wrote his memoir, ‘The Age of Turbulence: Adventures in a New World’, mostly while soaking in the bathtub, a habit he developed because of a back injury.
He justified his economic outlook thus, ‘Protectionism will do little to create jobs and if foreigners retaliate, we will surely lose jobs’.
You May Like

Quotes By Alan Greenspan | Quote Of The Day | Top 100 Quotes

See the events in life of Alan Greenspan in Chronological Order