(One of the Best-Selling Music Artists of All Time)

Advanced Search
In a world dominated by genres such as Rock, Alan Jackson is one person who has contributed greatly towards keeping the tradition of Country music alive. Alan accidentally discovered his love for music at a very young age, and since then there has been no looking back for this man from Georgia, U. S. In a career spanning three decades, Jackson has composed approximately 20 albums, consisting of songs that secured top spots in the famous ‘Billboard Countdown’. Most of his works are critically acclaimed, and have fetched him dozens of awards. He also proved his writing prowess by penning the lyrics of songs for other musicians, which went on to become chartbusters. Apart from music, Jackson has also voiced his concerns on various social issues. He slammed the growing preference of rock over Country music in the early 2000s through his song ‘Murder on Music Row’. This move made many people turn back towards the traditional style. His experiment with gospel and the song written in the wake of the World Trade Centre attacks were praised by a large section of music lovers. American People
Country Singers
Lyricists & Songwriters
American Men
Georgia Musicians
Childhood & Early Life
Alan was born on October 17, 1958 in Newnan city, Georgia, U. S. to parents Ruth Musick and ‘Daddy Gene’ Jackson. He was the youngest of the five children born to his parents. The Jackson family lived in a modest home.
Since the family wasn’t financially sound, Jackson took up odd jobs such as working at a shoe store, at the tender age of 12. At the same time, he even pursued his education from ‘Local Street Elm Elementary’ and ‘Newnan High School’.
Jackson was introduced to music in his childhood days through gospel. He continued listening to such divine songs even as a youngster, and hardly paid attention to any other form of music.
Jackson was later influenced by famous American country singers such as John Anderson and Gene Watson. This form of music, which was recommended to him by a friend, inspired Jackson to pursue a career in the field of music. 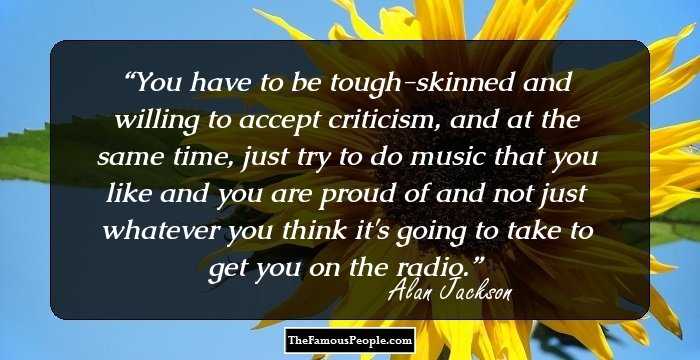 Quotes: Think, Time, Music
Continue Reading Below
Career
Alan later moved to Nashville in a bid to fulfil his dream. He first took up a job at ‘The Nashville Network’, a television channel aimed at promoting country music. He was given the responsibility of managing the mailroom of this channel.
At the same time, he met Glen Campbell, a famous country musician, who helped Alan start his career. Campbell recommended Alan Jackson to the music label ‘Arista Records’. The latter was then backed by the label in 1989 for the single ‘Blue Blooded Woman’, which was soon followed by ‘Here in The Real World’.
The early 1990s saw the release of Jackson’s second album. The songs of the first one titled ‘Don’t Rock The Jukebox’, such as ‘Dallas’ and ‘Love’s Got A Hold On You’, received critical acclaim, and secured top positions in the musical charts. He also worked on an album titled ‘High Lonesome’, and co-wrote few songs.
Jackson’s third album, and one of his most acclaimed works was ‘A Lot About Livin' (And a Little 'bout Love)’. Songs of this album such as ‘She's Got the Rhythm (And I Got the Blues)’, which were also co-written by musician Randy Travis were well-received by music lovers and critics alike. Jackson also won an award for this work in 1994.
The year 1994 was one of the most eventful periods of Jackson’s career. Not only did his fourth album ‘Who I Am’ release during this time, but Jackson was also appreciated for his writing skills. The song ‘If I Could Make A Living’, which he had co-written earned the top spot in a popular music countdown.
A compilation of Jackson’s famous songs titled ‘The Greatest Hit Collection’ was released in 1995. The very next year saw the release of Jackson’s sixth album titled ‘Everything I Love’. Jackson paid tribute to legendary singers such as Tom. T. Hall and Charly Mcclain through his rendition of the songs ‘Little Bitty’ and ‘Who’s Cheating Who’ in this one.
‘Under the Influence’ was his next album, which released in 1999. Even at a time when the country music was heavily influenced by rock music, Alan resorted to the traditional country style with the album.
Jackson’s album titled ‘Let It Be Christmas’, themed on the famous festival was released in 2002. The next year saw the release of the song ‘Timeless and True Love’, a duet for which he had collaborated with famous singer Jeannie Kemdell.
After releasing many country music themed albums, Jackson released his first collection of gospel songs titled ‘Precious Memories’. This album which was more like a gift to his mother, sold over 1.8 million copies, after its release in 2006.
Continue Reading Below
Post 2010, Jackson has released two albums titled ‘Freight Train’, ‘Thirty Miles West’ as well as his second gospel album ‘Precious Memories Volume II’. He even composed the opening credits song for a motion picture titled ‘A Million Ways To Die In The West’ recently. 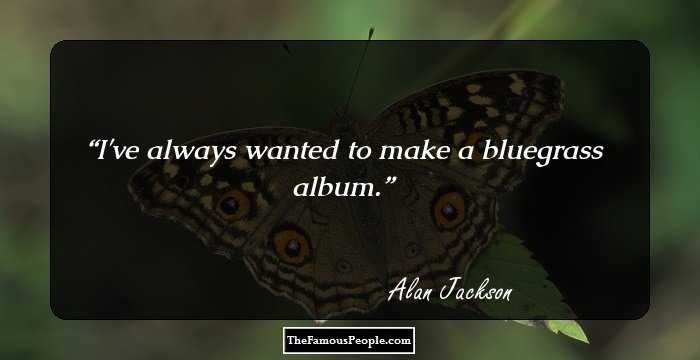 Major Works
Jackson was in the news during the early 2000s for a song titled ‘Murder on the Music Row’, through which he raised his voice against the decreasing popularity of country music. Despite not being a part of an album, this song grabbed the top positions in various music charts. Jackson was hailed by all lovers of country music for doing his bit to keep the traditional style alive through this song.
Alan expressed his thoughts about the infamous 9/11 attacks on the World Trade Centre through his song ‘Where Were You (When The World Stopped Turning)’. The song was hugely praised by many music lovers, and helped Alan fetch many awards, including the prestigious Grammy.
Awards & Achievements
Jackson has been a recipient of around 20 awards from the ‘Academy of Country Music’, in a span of a decade. Notable among these were the ‘Song Of The Year’ and ‘Album Of The Year’ honours which he received in 1991 for ‘Don’t Rock The Jukebox’.
In 2001 again, he bagged two awards at the ceremony hosted by ‘Academy of Country Music’. Both of these for the song ‘Where Were You (When The World Was Stopping)’, which was based on the 9/11 attacks on the World Trade Centre.
He was honoured fifteen times by the ‘Country Music Association’, for his contribution to the traditional style of art. A couple of these were in the ‘Song of the Year’ category for ‘Midnight in Montgomery’ as well as ‘Where Were You (When The World Stopped Turning)’
In 2002, he received the prestigious Grammy award for ‘Where Were You (When The World Was Stopping)’ in the ‘Best Country Song’ category.
He shared a Grammy in 2011 with singer Zac Brown Bland for the song ‘As She’s Walking Away’, in the category ‘Best Country Collaboration With Vocals’. 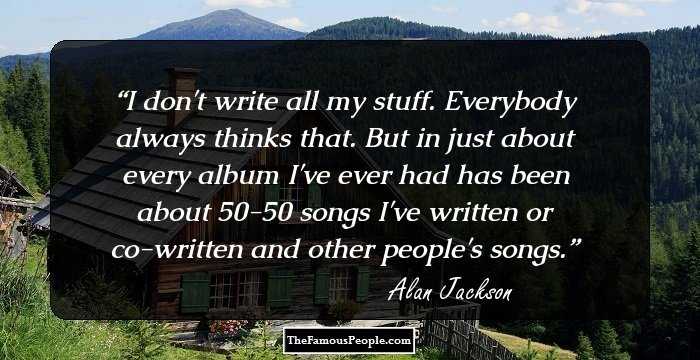 Personal Life & Legacy
Alan married Denise in 1979. Alan and Denise were batch mates in school and courted for a few years before tying the knot. The couple have three daughters named Matie Denise, Alexandra Jane, and Dani Grace.
Jackson is not the sole musician in his family. His nephew, Adam Wright, and his wife also play music together, the couple are known as ‘The Wrights’ in music circles.
Denise, Jackson’s wife, penned a book about the man titled ‘It’s All About Him: Finding The Love Of My Life’. This book speaks about the couple’s long relationship, and the friction which surfaced between them due to adultery.
Trivia
Alan Jackson is the cousin of the famous Baseball player Brandon Moss, who plays for the team ‘Cleveland Indians’.

Quotes By Alan Jackson | Quote Of The Day | Top 100 Quotes

See the events in life of Alan Jackson in Chronological Order