Advanced Search
Al Franken is one of the most recognized and celebrated politician of United States, who presently serves as the United States Senator from Minnesota. Ignoring his political career, he was a writer and performer for the television show, ‘Saturday Night Live’, from its conception in 1975 until 1980 and later on from 1985 till 1995. Franken from his high school days showed traits of becoming a performer. It was his stage stints at the young days that paved way for him to be recruited for the inaugural season of ‘Saturday Night Live’. The show became a major hit and so did Franken who garnered a lot of fame due to his association with the television show. Post SNL, he tried his hand at films and as a talk show host of his flagship program, ‘The Al Franken Show’, before finding his true calling as a politician. A member of the Democratic Party, he defeated incumbent Republican Senator Norm Coleman in 2008 with a slim margin of 312 votes to bag himself the seat. To further equip yourself with interesting and intriguing information regarding his life and profile, read through the following lines. American People
American Men
Harvard College
Male Leaders
Gemini Leaders
Childhood & Early Life
Al Franken was born to Joseph Franken and Phoebe in New York City. While his father was a printing salesman, his mother worked as a real estate agent. The family relocated to St Louis Park, Minnesota.
Young Franken completed his formal education from The Blake School in 1969. Thereafter, he enrolled at the Harvard University, completing his graduation with a Bachelor of Arts cum laude degree in government in 1973
Ever since his high school days, he performed with his friend and partner Tom Davis. The two then performed on stage at the Minneapolis’ Brave New Workshop Theatre, specializing in political satire. 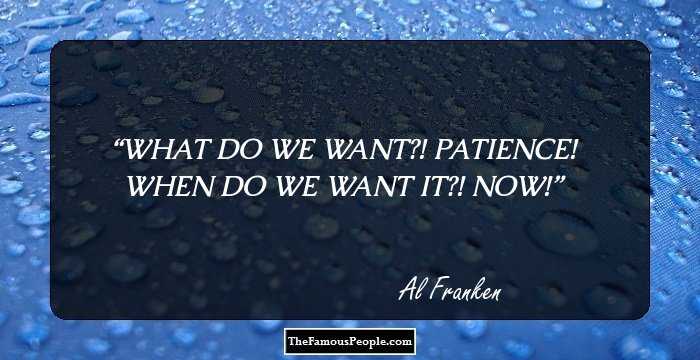 Continue Reading Below
Career
The successful partnership with Davies earned them a position of apprentice writer at the Saturday Night Live, wherein he served from 1975 to 1980 and 1985 to 1995. During his tenure at the SNL, he wrote numerous scripts and created various characters, like self-help guru Stuart Smalley.
His mockery of the NBC president Fred Silverman did not go well with the latter who refused Lorne’ Michael’s request of appointing Franken as his successor. As such, when Michael left the show, it automatically marked the end of Franken’s career with the SNL as well.
He returned to the show in 1985, not just as a writer but an occasional performer as well. He along with Davies wrote the script for the 1986 released comedy film ‘One More Saturday Night’. Together, the duo acted in a couple of films, including ‘All You Need Is Cash’ and ‘Trading Places’.
Year 1995 marked the end of his tenure with the SNL as he left the show after a protest of losing the role of Weekend Update anchor to Norm Macdonald.
After his stint at the world of entertainment, he tried his luck in the political arena as well. In 1999, he visited Kosovo and took up the role of a volunteer with the United Service Organization (USO), a position he serves till date.
In the capacity as the USO volunteer, he conducted and was a part of several overseas tours, out of which four were to Iraq and one to Afghanistan. He also participated in celebrity handshake tours at military hospitals, while visiting wounded soldiers.
Meanwhile, he was also an author by profession and wrote numerous books, four out of which were New York Times bestsellers. Some of his written works include, ‘Rush Limbaugh Is a Big Fat Idiot and Other Observations’, ‘Why Not Me?’, ‘Oh, The Things I Know! A Guide To Success or Failing That Happiness’ and so on.
His 2003 book, ‘Lies and the Lying Liars Who Tell Them: A Fair and Balanced Look at the Right’ provided a satirical information about American politics and conservatism. Same year, he served as a Fellow with Harvard's Kennedy School of Government at the Joan Shorenstein Center on the Press, Politics and Public Policy.
In 2004, he was offered the position of a host for the talk show on Air America Radio’s flagship program. Though the show was earlier named, ‘The O’ Franken Factor’, it was later renamed to ‘The Al Franken Show’
Continue Reading Below
Co-hosting with Katherine Lanpher, the show aired for three hours a day for five days a week. It lasted for three years. The main purpose of the show was to provide the listeners with more progressive views to counter the dominance of conservative political information that was being circulated.
February 14, 2007 marked the end of his career as the host on Air America Radio. Same day, he announced his candidacy for the seat of the United States Senate. Following year, he was endorsed at the DFL convention and by Ben Stein, who traditionally supported Republican candidates only.
After the elections, Coleman seemed to be the favourite contender for the position of the United States Senate. However, at the time of vote counting, there was less than 0.5 percent of difference between the two candidates which resulted in recount. At the recount, Franken emerged as the winner, ahead of Coleman by 225 votes which increased to 312 when the absentees’ ballot was counted.
He was sworn in as the Senate on July 7, 2009. A month later, Sonia Sotomayor was elected as the Associate Justice of the United States Supreme Court.
In the capacity of the Senate, his first piece of legislation was the Service Dogs for Veteran Act, which he co-wrote with Republican Johnny Isakson. The bill was passed with a unanimous consent and looked to provide service dogs to disable veterans.
His contribution in the field health care has been immeasurable. An avid supporter of single-payer system, he authored an amendment, called the Medical Loss Ratio, to the Patient Protection and Affordable Care Act, according to which insurance companies paid 80% of the premium on health care costs and 85% in case of large group plan.
It was his proposed amendment in the health care sector that saved $3.4 billion consumer money on premiums and resulted in nationwide rebates of $1.1 billion in 2012 and $500 million in 2013
In 2010, he proposed a financial reform amendment according to which a board would be created to select which credit rating agency would evaluate a given security. Though the amendment was passed, the financial industry lobbied to have his amendment removed from the final bill.
He intends to seek re-election in 2014. His slim margin made him a top target of the Republicans, but due to his high approval rating and Republican’s struggle to find a top-tier candidate has made him a favourite to win the re-elections in 2014. 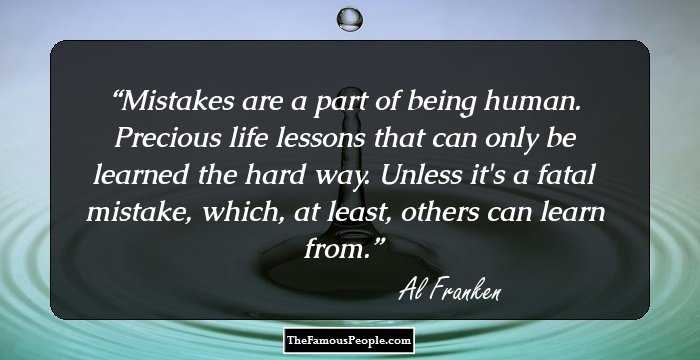 Quotes: Life
Awards & Achievements
During his years of service at the Saturday Night Live, he received seven Emmy nominations and three awards for his television writing and producing.
On March 25, 2009, he was conferred with the USO's-Metro Merit Award for his decade-long involvement.
Personal Life & Legacy
He tied the knot with his long-time college sweetheart, Franni Bryson. The couple moved to Minneapolis in 2005. They have been blessed with two children. 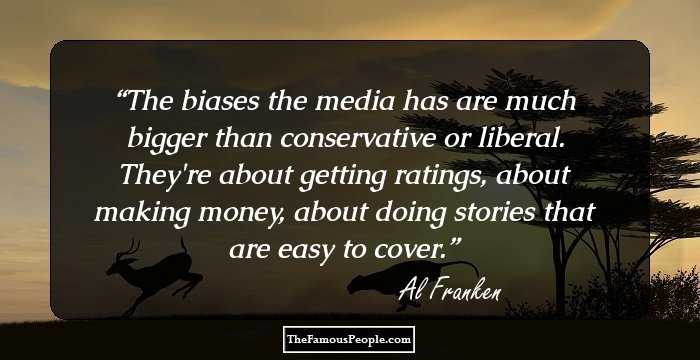 Quotes: Money
Trivia
This Senator of United States was previously a writer and performer for the television show ‘Saturday Night Live’ from its conception

See the events in life of Al Franken in Chronological Order