Adam Brody is a Hollywood actor who started with television and slowly and eventually made his space in the big screen. From early on, Brody knew he was made for acting. He realized his passion for acting and took every step in this direction to achieve his dream. Although he enrolled at school, he never took schooling and academics seriously. He was mostly found enjoying and having fun with friends. He spent his formative years on the beach and surfed all the time. His love for acting made him drop out of college and take up acting seriously. He loves watching movies apart from being in them. He mostly enjoys watching classics and horror movies. Apart from surfing and acting, Brody has a big inclination towards music. Dean Martin’s and Frank Sinatra’s are among his favorites. He also reads during his free time. Among his favourite books are ‘Cather in the Rye’, ‘Less than Zero’ and ‘The Amazing Adventures of Kavalier and Clay’. American People
Actors
American Men
California Actors
American Actors
Childhood & Early Life
Adam Brody was born on 15 December 1979 in Carlsbad, San Diego, California. He comes from a Jewish lineahe. His father is a lawyer and mother is a Creative Director at Sempra Energy. Brody has two siblings. Both of them are younger to him and are twins. They are Sean and Matt.
Brody was not a great kid at school. In fact, he performed very poorly in academics. He went to Wangenheim Middle School and Scripps Ranch High School. He rarely attended school and mostly spent time surfing. He pretty much spent all his childhood at the beach. His charming personality had a lot of girls flocking around him. However, he clarifies that he was not a Casanova.
He also attended Community College for a year, but later on dropped out on the pretext of fulfilling his aspiration to become a Hollywood actor. In the pursuit of his dream, he hired an acting coach and he also signed up with a manager. 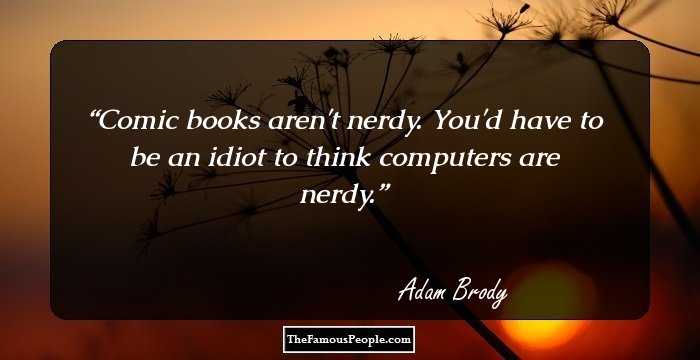 It was in 2000, Adam Brody starred in the television movie ‘Growing Up Brady’. He landed up with the character of Barry Williams in the movie after a year of hard work, training and auditioning.

Brody’s major role in television came when he was cast in a recurring role on ‘Gilmore Girls’ as Dave Rygalski. This happened in 2002. Prior to this, in 2001, Brody played a small part in ‘American Pie 2’.
The role that shot him to fame was of Seth Cohen in the television show ‘The O.C.’ in 2003. Brody became a teen icon with this show. His role in ‘The O.C. helped him gather a lot of female attention. This also got him rave titles such as ‘TV’s sexiest geek’; ‘25 Sexiest Stars under 25’ and the ‘Sexiest Man Alive’.
The year 2003 proved to be a good one for Brody as around the same year he also attempted writing and wrote a short film called ‘Home Security’. He also featured in the movie ‘Grind’ and a music video called ‘Too Bad about Your Girl’ by The Donnas.
In 2005, Brody had the great fortune of sharing screen space with Angelina Jolie and Brad Pitt in ‘Mr. & Mrs. Will Smith’.
In 2007, the television series ‘The O.C.’ came to an abrupt end. This ending made Brody shift his focus towards movies. He played supporting characters in many movies such as ‘Smiley Face’ and ‘The Ten’
He had some good roles to play in the following years. These include: ‘Death in Love’ (2009), ‘Jennifer’s Body’ (2009) and ‘The Romantics’ (2010) to name a few. He starred in these movies alongside big stars such as Megan Fox and Katie Holmes.

In 2013, he was seen in the movie ‘Lovelace’, which is a biopic of the late adult star, Linda Lovelace. Adam Brody portrayed the character of Harry Reems. 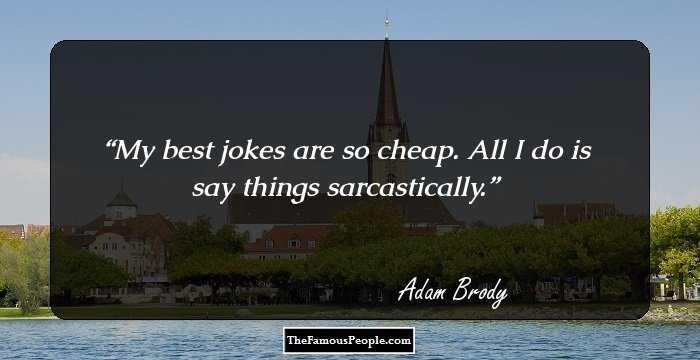 Major Works
Brody’s role in ‘The O.C.’ where he played the sarcastic and geeky Seth Cohen got him all the fame and recognition. He was given many titles from various magazines like ‘Sexiest Man Alive’ and the like. This show in a way opened his doors to Hollywood too. In the movies to follow, he had the great fortune of working alongside many Hollywood stars such as Brad Pitt, Angelina Jolie and Megan Fox.
Awards & Achievements
Adam Brody won the Teen Choice Award; for the category Choice TV Actor - Drama/Action Adventure for ‘The O.C.’ in 2004, 2005 and 2006.
He along with Rachel Bilson bagged the Teen Choice Award; for the category Choice TV Chemistry for ‘The O.C. in 2003.
He got nominated for Teen Choice Award for the category Choice Movie Actor: Horror/Thriller for ‘Jennifer’s Body’ in 2010. 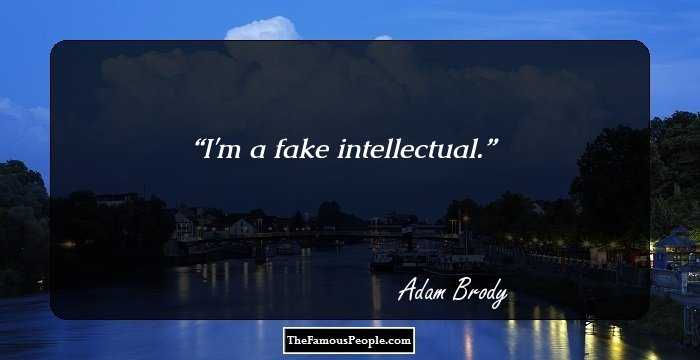 Adam Brody dated his co-star Rachel Bilson for three years. All was good between the couple before they broke up in December 2006.

After a year of dating, he got married to actress Leighton Meester in February 2014 in a private ceremony. The couple has two children, a daughter named Arlo Day Brody (born in 2015) and a son, born in 2020.

Trivia
This Hollywood actor happens to be the first male actor to pose for the cover of Elle Girl magazine.
He was given the commendation as one of ’50 Hottest Bachelors’ in 2003, 2004 and 2005.
Owing to his Casanova image and charming personality, he was voted number 1 in UK CosmoGIRL as pin-up.
Dolce & Gabbana named a boots after him called, ‘Adam Brody Lace Up Boots’.

See the events in life of Adam Brody in Chronological Order