Adam Driver is an American actor, best known for portraying ‘Kylo Ren,’ the main villain in the latest ‘Star Wars’ films, ‘The Force Awakens’ and ‘The Last Jedi.’ Born and raised in California, Adam was not too keen on a career in acting initially. Following the 9/11 attacks, he joined the ‘United States Marine Corps.’ He was later honorably discharged, following an accident. He then enrolled at the ‘Juilliard School’ to learn acting and soon started performing in ‘Broadway’ and ‘Off-Broadway’ productions in New York. He occasionally worked as a busboy and waiter to support himself. He made his screen debut with his appearance in the pilot of the 2010 series ‘The Wonderful Maladys.’ The next year, he made his film debut with Clint Eastwood’s ‘J. Edgar.’ After receiving initial praise for his performances, he eventually bagged a major role in the 2012 comedy–drama series ‘Girls,’ and this turned out to be a big career breakthrough. Reputed director Jim Jarmusch offered him the lead role in his film ‘Paterson,’ and the film proved a favorite with film festivals and earned Adam immense accolades. American People
American Men
California Actors
Scorpio Actors
American Actors
Childhood & Early Life
Adam Driver was born on November 19, 1983, in San Diego, California, to Joe Douglas Driver and Nancy Wright (née Needham). His mother worked as a paralegal and divorced Adam’s father when Adam was a child. She then married Rodney G. Wright, a minister at a Baptist church.
The family left California when Adam was 7 years of age, and his mother took Adam and his sister to her home state, Indiana. There, he was enrolled at the ‘Mishawaka High School’ and did some plays during his school days, which laid the foundation of his future career in acting. By the time he graduated from high school, he had started trying to become a serious actor. He soon applied to the ‘Juilliard School,’ the best acting school in New York. However, his application was rejected.
Facing a painful rejection did not make Adam lose hope, and he soon decided to move to Los Angeles. Unfortunately, his car broke down midway, forcing him to return to his house. Around the same time, the 9/11 terrorist attacks took place, shaking the whole of the US and the world. Adam was deeply affected too, and he immediately applied to the American military. He had given up on acting by then, and joined the ‘United States Marine Corps.’

In the following two years, Adam Driver enjoyed his stint with the military. However, an unfortunate mountain-bike accident ended his days in the army. He was honorably discharged and then joined the ‘University of Indianapolis’ for a year. Bored of the university, he decided to give his old love, acting, another shot and applied to the ‘Juilliard School’ yet again. His application was accepted this time around. 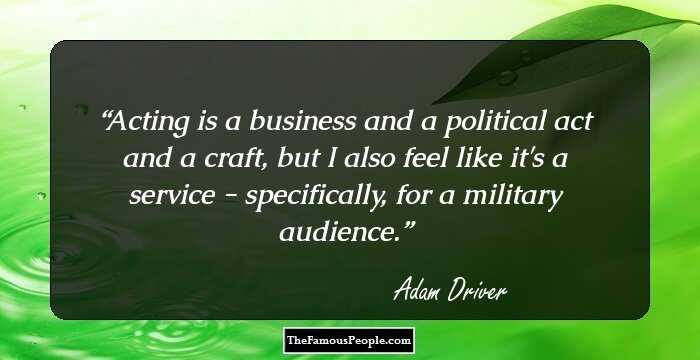 Famous Beautiful Women With Green Eyes
Career
Once he graduated with a ‘Bachelor of Fine Arts’ degree, he began acting in New York and became part of many ‘Broadway’ and ‘Off-Broadway’ productions. However, he did not get paid enough to make ends meet. This made him work part time to earn enough to survive in New York. He once worked as a busboy and waiter while auditioning for TV and film stints. Around that time, he also did short films and pilots for TV shows.

In 2010, Adam Driver finally bagged a significant role in the pilot of the series ‘The Wonderful Maladys.’ The series was not picked up by any network. Adam then worked in other TV shows such as ‘Law & Order’ and ‘The Unusuals.’ In 2011, he made his film debut with the Clint Eastwood-directed ‘J. Edgar,’ in which he played ‘Walter Lyle.’ This was a small role.

The role that earned him mainstream fame was that of the protagonist’s boyfriend in the 2012 TV comedy–drama series ‘Girls.’ He ended up getting nominated for three ‘Primetime Emmy Awards’ for ‘Outstanding Supporting Actor in a Comedy Series.’
2012 turned out to be a major year for Adam’s acting career. After enjoying mainstream success with ‘Girls,’ he earned roles in two successful films, namely, ace director Steven Spielberg’s ‘Lincoln’ and the independent film ‘Frances Ha.’ His roles in both the films were appreciated. Soon, many filmmakers and TV moguls began approaching Adam.
The success story that started in 2012 continued in 2013 too, with Adam starring in four big films. He started with ‘Bluebird’ and ‘The F Word,’ and by the end of the year, he had appeared in ‘Inside Llewin Davis’ and ‘Tracks.’ Despite many of his films failing at the box office, Adam enjoyed immense appreciation from critics.
His most critically acclaimed film to date, the Italian film ‘Hungry Hearts,’ earned Adam the ‘Volpi Cup’ for the ‘Best Actor.’ The film also competed for the ‘Golden Lion Award’ at the ‘Venice International Film Festival,’ one of the most prestigious film awards in the world.

In 2014, Adam Driver garnered further success with his roles in ‘This is Where I Leave You’ and ‘While We’re Young.’ He played the role of an aspiring filmmaker in the latter, opposite Naomi Watts.

In April 2014, an official announcement confirmed that Adam was to play ‘Kylo Ren,’ an emotionally unstable villain, in the new ‘Star Wars’ film ‘The Force Awakens,’ which was termed as the most keenly awaited film of the year. The film was eventually released in December 2015. The film was received well by critics, and his performance was appreciated.
In 2016, he appeared in ‘Midnight Special,’ a science-fiction thriller. The film was honored at the ‘Berlin Film Festival’ and competed for a ‘Golden Bear Award.’ He then appeared in Martin Scorsese’s mega-budget film ‘Silence.’ The film was a huge critical and commercial success.
Adam was then approached by Jim Jarmusch, the cult director of niche films. Jim offered Adam a major role in his film ‘Paterson.’ Adam played a bus driver who also happens to be an aspiring poet. The beautifully crafted film premiered at the ‘Cannes Film Festival’ and was a huge success at various other film festivals too.
He then appeared in Steven Soderbergh’s 2017 film ‘Logan Lucky,’ alongside Channing Tatum and Daniel Craig. Toward the end of 2017, he appeared in ‘Star Wars: The Last Jedi,’ a film which opened to moderate critical and commercial success.

In 2018, Adam Driver starred as the lead character in the adventure-comedy The Man Who Killed Don Quixote.�

In 2019, Driver appeared as Daniel Jones in The Report. That�same year, he returned to Broadway in�a production of Lanford Wilson's Burn This, and�co-starred with Scarlett Johansson in Marriage Story.�He received a nomination for the Academy Award for Best Actor for this film. 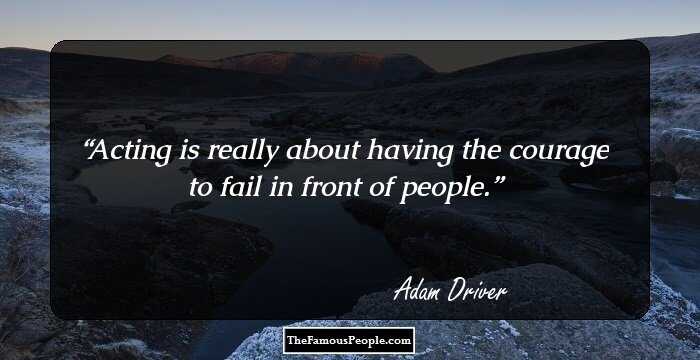 Adam Driver dated Joanne Tucker for almost a decade before eventually marrying her in 2013. The family lives in Brooklyn with their pet dog Moose, a Pit-bull–Rottweiler mix. The couple has a son.

Adam is a great admirer of the armed forces, as he learned to appreciate them during his years in the army. He has founded ‘Arts in the Armed Forces,’ a company that organizes free theatrical shows for American army men stationed in the US or abroad.

Quotes By Adam Driver | Quote Of The Day | Top 100 Quotes

See the events in life of Adam Driver in Chronological Order