Abigail Adams was the First Lady of the United States from 1797 to 1801; she was the wife of the second President of the United States, John Adams. She was also the mother of John Quincy Adams, the sixth president. An intelligent and independent-minded woman, she was known for being an unofficial advisor to her husband. The couple primarily corresponded through letters when John Adams was away from home due to his political duties. The letters which they exchanged, when John stayed at Philadelphia during the Continental Congress serve as the firsthand account of the American Revolutionary War. These letters reveal how influential she was as John Adams used to seek her advice on varied issues, which even included his presidential aspirations. She provided strong emotional support and was a close confidante to her husband while he served as the President of United States; she was often called ‘Mrs. President’. She used to take the responsibility of her entire family and farm when her husband remained busy in his profession. Though Abigail Adams was not formally educated, she was a woman with immense self-belief. She was one of the most learned women ever to serve as the First Lady. The large library in her house enabled her to read as much as possible and remain a well-informed woman. 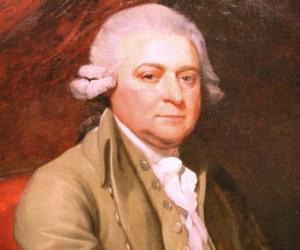 American People
American Women
American First Ladies
Sagittarius Women
Childhood & Early Life
She was born as Abigail Smith to William Smith and Elizabeth (née Quincy) Smith on November 11, 1744, in Weymouth, Massachusetts Bay. Her father was a liberal Congregationalist minister who emphasized the importance of reason and morality in his preaching. She had one brother and two sisters.
Abigail was sickly as a child, so her parents did not send her for formal schooling. Instead, her mother herself taught the little girl to read and write. The family had a huge library which enabled her to study English and French literature.
She grew up to be an open-minded, well-read young woman with a deep passion for books. 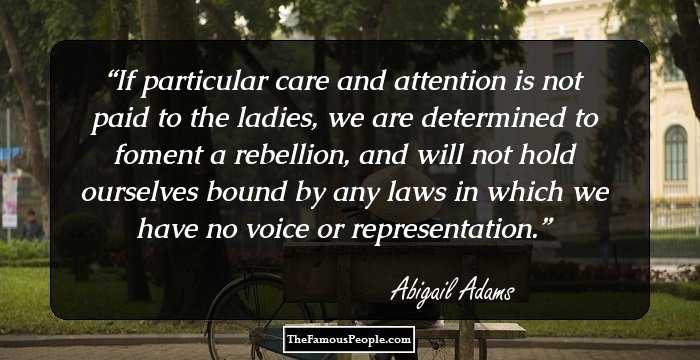 The Sexiest Men Of 2020, Ranked
Later Life
Abigail married a country lawyer, John Adams, in 1764, and moved to Boston with her husband. In addition to being a busy lawyer, John Adams was also an active participant in the American Revolution and Revolutionary War.
The couple had several children over the ensuing years. Due to her husband’s hectic schedule, Abigail was the one who had to carry out most of the family responsibilities. In addition, she also cared for the family farm.
Despite being away from each other for much of the time, John and Abigail Adams frequently wrote letters to each other, maintaining a continuous and intimate correspondence. It is believed that they exchanged more than 1,100 letters.
After the revolution, she moved to France to join her husband and later followed him to England where he served from 1785 to 1788 as the first American minister to the Court of St. James.
By this time her husband was deeply involved in politics and was made the Vice President of the United States in 1789. She spent some time with him in New York and helped First Lady Martha Washington in her responsibilities. During this period she often returned home to Massachusetts to look after their farm.
She was very supportive of John Adams’ presidential aspirations and took an active interest in his campaigns. John Adams became the President of the United States in 1797, and Abigail found herself handling additional responsibilities as the president’s wife.
As the First Lady, she made a strong impression on the press and public. An outspoken woman with strong beliefs regarding women’s issues and civil rights, she was an advocate of married women's property rights and more opportunities for women. She was also of the view that slavery was evil and a threat to the American democracy.
Both John Adams and Abigail were very strong-headed and did not agree on several political matters even though she was one of her husband’s closest confidantes. But both of them agreed on the Alien and Sedition Acts of 1798. John Adams signed these acts into laws but was later criticized for these anti-immigrant, anti-free speech moves.
John Adams ran for the presidency again in 1800 but was defeated by Thomas Jefferson. The couple retired to their family farm after John Adams left office in 1801.
Continue Reading Below 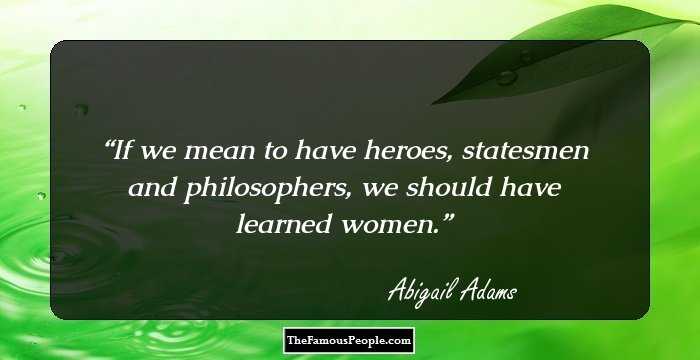 Quotes: Women
Personal Life & Legacy
Abigail and John were third cousins and had known each other since they were children. John became attracted to her when she was 17—he was much impressed by the young woman’s quest for knowledge and love for books. The couple got married on October 25, 1764.
She gave birth to six children over the ensuing years. One of her sons, John Quincy Adams, would follow in his father’s footsteps to become the president in future. Her family life was replete with tragedies as her son, Charles, died of alcoholism and daughter, Nabby, died of cancer before her eyes.
Abigail Adams suffered from ill health during her later years and suffered a stroke in October 1818. She died on October 28, 1818, of typhoid fever, exactly two weeks shy of her 74th birthday.
The Abigail Adams Cairn—named after her—marks the spot where Abigail Adams and her son, John Quincy Adams, watched the burning of Charlestown on June 17, 1775.
Abigail’s grandson published the letter, which Abigail exchanged with her husband by the name, ‘‘Letters of Mrs. Adams’ in 1840.
In 1988, Massachusetts Women’s Political Caucus introduced an award in her name to recognize women leaders of Massachusetts.
The First Spouse Program under the Presidential $1 Coin Act issued half-ounce $10 gold coins and bronze medal duplicates to honor Abigail Adams on June 19, 2007.
One of the sub peaks of Mount Adams is also named after Abigail Adams.
You May Like

Quotes By Abigail Adams | Quote Of The Day | Top 100 Quotes

See the events in life of Abigail Adams in Chronological Order