Zoroaster, also known as Zarathustra, Zarathushtra Spitama and Ashu Zarathushtra, was a prophet who started a new movement, which eventually developed into a new religion called Zoroastrianism. Although the exact time and place of his birth is never known he is believed to have lived in Eastern Iran sometime between 1500 BCE and 500 BCE. Born in a nomadic tribe and trained as a priest, he later rose to criticize many religious practices of those days, thus earning the displeasure of the powerful priestly community. At a time, when people worshiped a number of gods and deities, he declared that none other than Ahura Mazda, the Supreme Being, was worthy of worship. As a result of this he was constantly harassed, finally receiving the patronage of King Vishtaspa, possibly of Bactria, at the age of forty. Thereafter, the religion he taught began to spread far and wide and by the time he died at the age of seventy-seven, it had spread all over Persia. Today, it is considered one of the oldest continuing religions of the world and Zoroaster is taken as one of the long line of Prophets, who have helped to uplift mankind to greater heights. Harun al-Rashid
DID WE MISS SOMEONE?
CLICK HERE AND TELL US
WE'LL MAKE SURE
THEY'RE HERE A.S.A.P
Quick Facts

Iranian People
Spiritual & Religious Leaders
Iranian Men
Year of Birth
No one knows for sure, when Zoroaster was born or lived. Different scholars have put forward different theories on the plausible time of his birth; but no one has come forward with the exact year. Only the Zoroastrian tradition has something positive to offer.
According to Zoroastrian tradition, he was born 258 years before Greek Emperor Alexander the Great conquered Persepolis, the capital of the Achaemenian dynasty of Persia. Since that happened in 330 BCE, he must have been born in 628 BCE.
Moreover, when Zoroaster converted King Vishtāspa in 588 BCE he was 40 years old. This too indicates his year of birth to be 628 BCE. However, modern scholars, who base their theory on linguistic similarities between Zoroastrian Gatha, composed by the Prophet himself, and Sanskrit Rig Veda, have different views.
Since Rig Veda was created sometime between 1700 BCE and 1100 BCE and since the Gathas depicts an ancient Stone-Bronze Age bipartite society, scholars say that he must have been born sometime around 1200 BCE. Nonetheless, all of them agree that he was born sometime between 1500 BCE and 500 BCE. 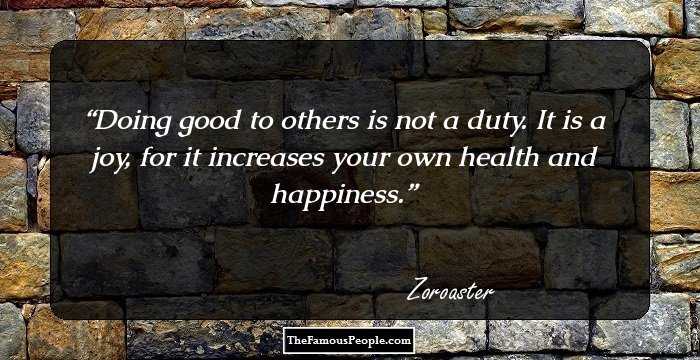 Continue Reading Below
Place of Birth
There is also great confusion about the place of his birth. While majority of the scholars believe that he was born in the northeastern part of Persia, some have also tried to place him in western or northern Persia.
According to traditional belief, he was born in Airyanem Vaejah, which according to some scholars is the modern day Azerbaijan, the ‘Land of Fire’. However, there is no distinct proof of that and more importantly, the language of the Gathas is quite different from the dialect spoken in this area.
Another set of ancient scholars cite Bactria, spread between the Hindu Kush mountain range and the Amu Darya River, as his place of birth. This view is upheld by Greek and Roman scholars like Ammianus Marcellinus, Ctesias and Moses of Chorene, who obtained the information directly from Persian sources.
Some also believe him to be of Median origin while others call him a Chaldaean, a Perso-Median Persian, an Armenian, or a Pamphylian. However, all these may be hearsays, which might have sprung up as the religion he promoted began to spread. 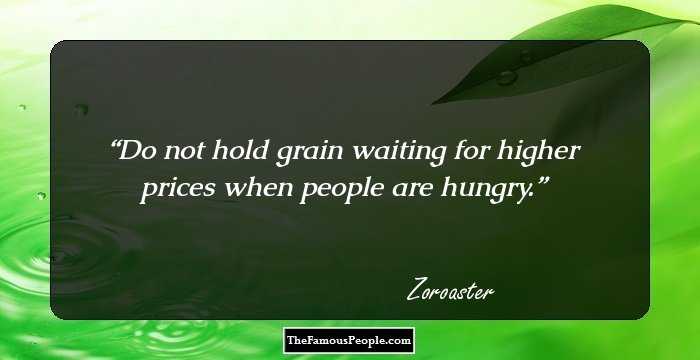 Quotes: Business
Childhood & Early Years
Not much is known about his early childhood. However, the Gathas provide us with a very vague picture, from which one can sketch the story of his life.
Zoroaster was born in the house of Spitama. From the names of the family members, scholars have concluded that it must have belonged to a nomadic tribe, with Spitama as a distant ancestor.
His father’s name was Purushaspa, which meant ‘possessing grey horses’ while his mother was Doghdova, ‘milkmaid’. In his native language, he was called Zaraϑuštra, meaning ‘he who can manage camel’. While being transliterated in Greek, it became Zōroastrēs, which in turn was anglicized into Zoroaster.
It is believed that Zoroaster was born third of his parents’ five sons. There are many miraculous stories concerning his birth. It is said that, as he took birth, the angels from heaven came to pay their respect and that unlike other children, who cry out at birth, he laughed.
Continue Reading Below
As Zoroaster turned seven, he began his training in priesthood, completing it by the age of fifteen. From an early age he was an unusual child, showing great wisdom.
After completion of his training, Zoroaster remained with his parents for five more years. During this period, he showed remarkable detachment to materialistic world; but at the same time, showed intense love for every living being.
At the age of twenty, he left home to study with other teachers. Travelling throughout the country, visiting not only cities, but also the mountains and forests, he enriched himself with personal experiences. Controlling five senses, he spent a lot of time in meditation.
Revelations
Zoroaster experienced his first revelation at the age of thirty. That year, during the spring festival, he saw a shining Being, who revealed himself as Vohu Manah or ‘Good Purpose’. He taught him about Ahura Mazda or the Wise Spirit and then told him about five other radiant Spirits.
Apart from that, Vohu Manah also told him about Angra Mainyu or the Hostile Spirit as well as about Asha or Truth and Druj or Lie. Thus enlightened, Zoroaster decided to spend his life telling people about Asha.
Sometime later, he had further revelation, in which he had vision of the seven divine entities, collectively known as Amesha Spenta. They have also been described as the seven sparks of Ahura Mazda, the supreme Lord. These visions enlightened him fully; turning him into a Prophet. 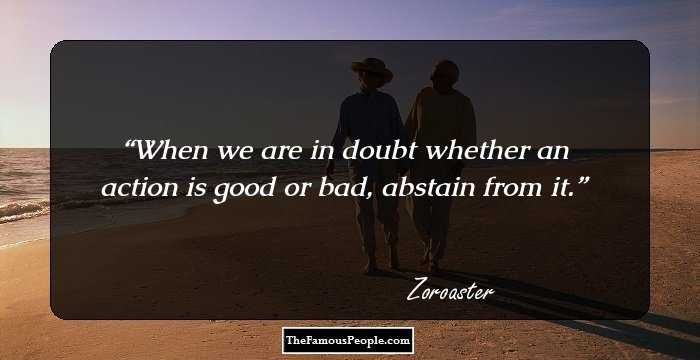 Preacher of New Faith
Zoroaster next went about preaching his new faith, opposing many old beliefs held by the Persians, who were polytheist. He preached that there is only God, Ahur Mazda, whom all should worship. All others, termed Daevas, are evil spirits, who are not at all worthy of devotion.
He also talked against over ritualistic religious ceremonies, consumption of intoxicating Haoma juice, animal sacrifices and class system that allowed the priests and warriors to oppress the ordinary people. Instead, he stressed on the importance of free will and urged the people to follow the path of righteousness and truth.
Continue Reading Below
Initially, his preaching was met with indifference. But very soon, the priests, fearing erosion of their influence, began to oppose his views. But undeterred by such enmity, having full faith in Ahur Mazda, he continued to preach his view, now and then having discourses with the Lord Himself.
First to convert to his new faith was his cousin Maidhyoi-madnha, who remained faithful to him until his death. At the same time, the priests and sorcerers continued to hassle him, making several attempts on his life. Eventually, he returned to eastern Persia, where he found patronage under King Vishtaspa.
Although no historical evidence have been found about King Vishtaspa, it is believed that he belonged to the Kayanian dynasty. It is also believed that prior to his conversion he was a Kavi, a poet-priest, possessing gift of prophecy as well as gift of mantic poetry.
Here too, Zoroaster, then forty-two years old, faced great opposition; but slowly he won over his opponents. The entire royal family including Queen Hutaōsa and King’s brothers, Frashaoshtra and Jamaspa, became his disciples. With time, ordinary people also began to take up his religion and became Zoroastrians.
The Faith He Preached
The faith that he preached became later came to be known as Zoroastrianism. Also known as Mazdayasna, it is one of the oldest surviving religions of the world. At its center is the Supreme Being, he called Ahura Mazda. Opposed to Him is Angra Mainyu, who leads one into the path of falsehood.
According to Zoroaster, each human being possesses free will and therefore has the power to choose between good and evil. Hence, one should forsake the path of falsehood and worship Ahura Mazda, Wise Supreme Being. He also stressed upon raising children in the path of righteousness and planting trees.
He is also the creator of the ‘Gathas’, which has been written in the style of ancient religious poems. Later incorporated into the Avesta, it consists of seventeen hymns, and forms the core of Zoroastrian liturgy.
Personal Life & Legacy
Zoroaster married Hvōvi, the daughter of Frashaoshtra, Vishtaspa’s brother and vizier. They had three sons named Isat Vastar, Uruvat-Nara, and Hvare Ciθra; and three daughters named Freni, Pourucista, and Triti. According to tradition, he gave Pourucista in marriage to Vishtaspa’s second brother Jamaspa, another important vizier of the kingdom.
Another account says that he had three wives. The first two wives bore him the six children while Hvōvi, his third wife, was childless. All of them took up his religion and remained faithful to him until his death.
Zoroaster died at the age 77. As the story goes, a war was going on between Persia and Turan, a country that opposed his teachings. It is said that while Zoroaster was praying in the temple of Nush-Adar, he was attacked by a Turanian called Bratrok-resh and killed.
With time, the new faith, which came to be known as Zoroastrianism, began to spread far and wide, ultimately making it the religion of the Kingdom of Persia. In later days, his teachings had extensive influences on other religions such as Ahmadiyya, the Bahá'í Faith and Manichaeism.
Today, he is recognized as one of the long line of Prophets, who have progressively taken mankind to higher level. He thus shares an exalted position with other Prophets, such as Abraham, Moses, Jesus Christ and Muhammad.
Zoroaster has been placed first in the chronology of philosophers in the Oxford Dictionary of Philosophy, 2005 edition. He also ranked #93 on Michael H. Hart’s list of the most influential figures in history.
Trivia
Europeans began to take interest in Zoroastrianism after French Indologist Abraham Anquetil-Duperron translated Avesta sometime in the middle of the eighteenth century.
Recommended Lists:
Historical Personalities #703

Quotes By Zoroaster | Quote Of The Day | Top 100 Quotes

See the events in life of Zoroaster in Chronological Order