Zoe Saldana is an American actress and dancer who jumped to fame with her high-profile roles in blockbuster films such as ‘Pirates of the Caribbean: The Curse of the Black Pearl’, ‘Star Trek’, ‘Star Trek Into Darkness’ and ‘Avatar’. A trained ballet dancer, Saldana had a modest beginning as a theatre artist. She performed in numerous plays for FACES and New York Youth theatre group before making an entry into the big screen with the flick, ‘Center Stage’. Till date, Saldana has enjoyed great success with a line-up of worldwide highest grossing films in her kitty. What gives her the edge over other actresses of her generation is her versatility. Saldana hasn’t limited herself to a particular genre and has been seen giving effortless performance in films of wide-ranging subjects, right from romantic comedy to tragedy, sci-fi to action, fiction to drama and so on. It is her intense concentration and resolute mind that has helped her play such an incredible range of characters. Other than being a star in her own right, Zoe Saldana is also a shrewd businesswoman. She owns several restaurants, has her own line of fragrance and clothing and her own brand of vodka Zoe Saldana was born on June 19, 1978 in Passaic, New Jersey to Aridio Saldana and Asalia Nazario. She has three siblings: two sisters Cisely and Mariel and a half-brother, Nipo.

Christened Zoe Yaddira Saldana Nazario at the time of her birth, she came from a mixed heritage; her father is from Dominican Republic and her mother is a Puerto Rican.�

Zoe Saldana spent much of her childhood years in Jackson Heights, Queens, New York. As a child, she was bilingual, being proficient in both English and Spanish.

At the tender age of nine, she lost her father to a car accident. Consequently, she along with her two sisters and mother shifted base to Dominican Republic, to live with her grandparents.

It was at Dominican Republic that Zoe Saldana discovered her passion and love for dancing. She soon enrolled herself at ECOS Espacio de Danza Academy where she was taught varied forms of dance. Ballet turned out to be her first love. 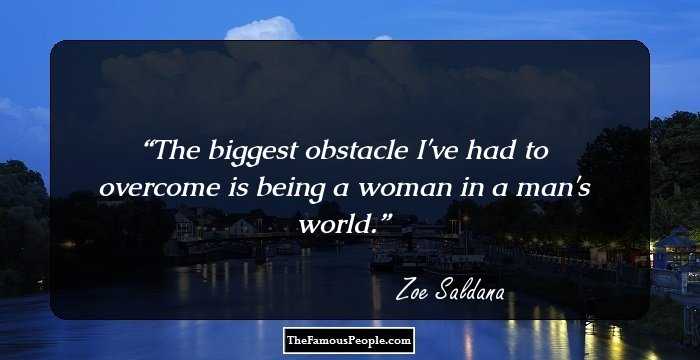 Continue Reading Below
Career
After completing her sophomore year in high school, Zoe Saldana moved back to New York City. In 1995, she joined FACES theatre group in Brooklyn. With the troupe, she began performing in plays that were themed on subjects like dealing with substance abuse and adolescent sexuality. Additionally, she also started performing for the New York Youth Theatre group.
It was her spectacular performance in the show, ‘Joseph and the Technicolor Dreamcoat’ for the New York Youth Theatre group that earned her a place at a talent agency. In 1999, she made her debut on the small screen with the episode ‘Merger’ in the legal drama, ‘Law & Order’.
Her ballet training and acting experience helped her bag her first big screen role. It was in the film, ‘Center Stage’ and she played the character of Eva Rodriguez, a talented and determined ballet student. The film was released in 2000.
In 2002, she starred in the movie ‘Crossroads’ and the comedy-drama, ‘Drumline’. She followed this up with the character of Anamaria, a female pirate in the blockbuster movie, ‘Pirates of the Caribbean: The Curse of the Black Pearl,’ in 2003.
Year 2004 was a productive year as it marked the release of her three films: ‘The Terminal’, ‘Haven’ and ‘Temptation’.
From 2005 to 2006, she starred in four films, including, ‘Constellation’, ‘Guess Who’, ‘Dirty Deeds’ and ‘Premium’. ‘Guess Who’ and ‘Premium’ had her play the female lead. While in the former, she starred opposite Ashton Kutcher, in the latter she played the romantic interest of Dorian Missick.
The highpoint in Saldana’s career came in 2009 with the movies, ‘Star Trek’ and ‘Avatar’. Her acting skills were highly lauded by the critics and audience alike.
In 2010, she starred in four films: ‘The Losers’, ‘Takers’, ‘Death at a Funeral’ and ‘Burning Palms’. Same year, she made her debut in the ad world with the Calvin Klein’s ‘Envy’ line.
Year 2011 witnessed the release of her two films: a romantic comedy, ‘The Heart Specialist’ and crime-drama, ‘Columbiana’. She followed this up with the 2012 romantic drama film, ‘The Words’
Continue Reading Below
In 2013, she reprised her role of Nyota Uhura for the Star Trek series next offering, ‘Star Trek Into Darkness’. Next year, she played the character of Gamora in the film, ‘Guardians of the Galaxy’. She also featured in the television miniseries, ‘Rosemary’s Baby’.
Her future projects include reprising the role of Neytiri for the sequel, ‘Avatar 2’, which is expected to release in 2017. 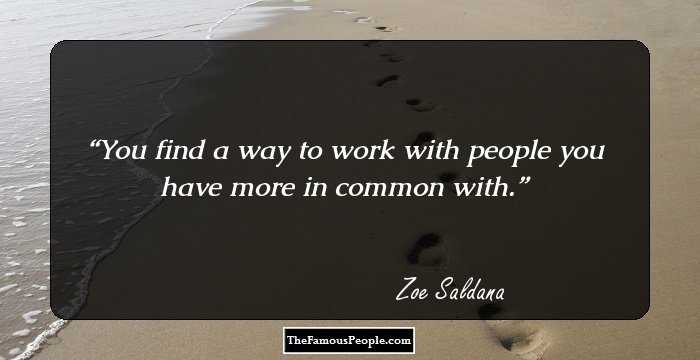 Major Works
The highpoint in her career came in 2009 with the films, ‘Star Trek’ and ‘Avatar’. Both the films had her play significant roles of Nyota Uhura and Neytiri respectively. While ‘Star Trek’ collected about $385 million at the box office, James Cameroon’s ‘Avatar’ grossed $2.788 billion.
Saldana featured in the Star Trek franchise 2009 film, ‘Star Trek Into Darkness’, reprising her role of Nyota Uhura. The film grossed $467 million worldwide, thus becoming the highest grossing film of the Star Trek enterprise.
Awards & Achievements
In 2009, she won her first award in the category of ‘Best Ensemble Cast’ by Boston Society of Film Critics’ Awards for the film ‘Star Trek’.
In 2010, she won multiple awards in the ‘Best Actress’ category for her role of Neytiri in James Cameron’s film, ‘Avatar’. The awards include: ‘Academy of Science, Fiction, Fantasy & Horror Films’, ‘Empire Awards’, ‘Saturn Awards’ and ‘Teen Choice Movie Actress - Sci Fi’. Additionally, her character of Neytiri won the Outstanding Animated Character in a Live Action Feature Motion Film by Visual Effects Society Awards.
In 2012, she won Teen Choice Movie Actress – Action award for ‘Columbiana’. 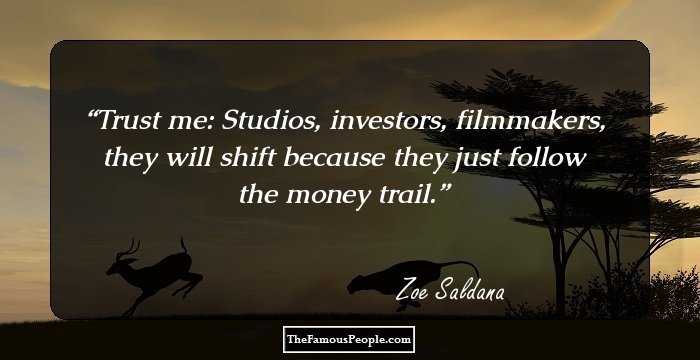 Personal Life & Legacy
Zoe Saldana was in a relationship with Keith Britton, an actor and CEO of My Fashion Database. The two got engaged in 2010 but parted ways the following year, which ended their 11 years of relationship.
From December 2011 to January 2013, she was in a relationship with actor Bradley Cooper.
She began dating Marco Pergo, an Italian artist in March 2013. The two married in June 2013 and were blessed with twin sons, Bowie Ezio and Cy Aridio, in November 2014.
Trivia
For her role of Nyota Uhura in the Star Trek series, she underwent training in martial arts, archery and horseback riding.
She serves as the celebrity supporter of FINCA International, a microfinance organization.

Quotes By Zoe Saldana | Quote Of The Day | Top 100 Quotes

See the events in life of Zoe Saldana in Chronological Order