(One of the Greatest Football Strikers of All Time)

Zlatan Ibrahimovic is an ace Swedish footballer who plays for the English club Manchester United. He served the Swedish football team as a captain from 2010 until he retired from international football in 2016. Known as one of the most prolific strikers, Ibrahimovic is well*known for his strength, precision and stamina. Having won 33 trophies in his football career, he has become the second most decorated active footballer of present times. Beginning his career in late 90’s, through his sheer ability and skills, he became a crucial member of the Swedish national football team. He is one of the ten players to have made more than 100 appearances for the national football team of Sweden.Hhe is the all time leading international goal scorer for Sweden. He represented his home country in the 2002 and 2006 world cups along with several UEFA European championships. He has been awarded Sweden’s highest honour for a football player, the Golden Ball award, for a record 11 times. In December 2013, The Guardian named him as one of the top three footballers of this era, behind legends, such as Lionel Messi and Cristiano Ronaldo. In December 2014, he was namedas the second greatest Swedish sportsperson of all time by a leading Swedish newspaper, Dagens Nyheter; the first being legendary tennis player, Bjorn Borg. Toni Kroos
DID WE MISS SOMEONE?
CLICK HERE AND TELL US
WE'LL MAKE SURE
THEY'RE HERE A.S.A.P
Quick Facts

awards: International Swede of the Year

Swedish People
Tall Celebrities
Tall Male Celebrities
Male Sportspersons
Libra Football Players
Childhood & Early Life
Zlatan Ibrahimovic was born on 3rd October 1981 in Malmo, Sweden to Muslim Bosnian immigrant parents, Sefik Ibrahimovic and Jurka Gravic. The family lived in very humble condition and lacked basic necessities. To make matters worse, his parents divorced while Zlatan was just 2 years old. However, the family somehow managed to earn enough to provide a decent upbringing to Zlatan while he was growing up.
Zlatan started playing football at the age of 6 when he was gifted a pair of football boots on his birthday. That was around the late 80’s, and as Zlatan grew up, he kept shaping himself up mentally and physically with the dream to play for his national team someday. In school, he was a bully and got involved into thefts, which he later accepted himself and said that he was obsessed with bicycles and would steal them whenever he got the chance.
Zlatan started playing for Malmo BI and FBK Balkan as a kid. In his teenage, he started playing for a local club Malmo FF. However, good he was at the sport, he wasn’t earning enough to survive and decided to quit the game when he was 15, to work at the docks to earn bread and butter for himself. His manager encouraged him to go further and the rest is history.
Continue Reading Below
International Career
Zlatan Ibrahimovic’s skills soon made him a rising domestic level player and earned him the chance to represent Sweden, Bosnia, Croatia or Herzegovina internationally, but he decided to go with Sweden. In 2001, he made his debut as an international player in a friendly match against Faroe Islands, which ended in a draw. Later that year, he scored his first international goal against Azerbaijan in a world cup qualifier match helping his team to a 3-0 victory.
Ibrahimovic was a part of national Swedish team in the 2002 world cup, where the team was eliminated in early stages. Ibrahimovic became a national football hero when he scored three goals for Sweden in UEFA European League 2004 Qualifier.
During the 2006 World Cup Qualifying campaign, he scored 4 goals to ensure a victory for his team against Malta with a 7-0 final score. However, the world cup wasn’t a memorable experience for the national team as Germany thrased Sweden out of the tournament in the round of 16.
In 2006, Ibrahimovic signed with club Internazionale, where his aggressive game got him prestigious awards such as ‘Italian Oscar del Carcio’ and the ‘Swedish Guldbollen’. His team was named as UEFA team of the year in 2007 and 2009. In the 2010 World cup qualifier, he played a major role in Sweden winning a crucial match against Malta and scored one goal. He continued the performance against Hungary and secured his team a 2-1 win.
In the Euro 2012 Qualifier, Ibrahimovic was named the captain of his national team and despite a fabulous performance, his team was knocked out in the group stage itself. The goal he scored with a volley in a match against France was called as the ‘goal of the tournament’ and he earned a spot in the ‘Team of the Tournament’.
In the 2014 world cup qualifier tournament, Ibrahimovic led his team and ended the tournament with eight goals. His team didn’t make it to the World Cup. In a friendly match against Estonia in 2014, Ibrahimovic scored his 50th international goal. In Sweden’s last match at the 2014 Euro qualifying tournament, Ibrahimovic announced his retirement from the international games.
Club Career
In July 2001, Ibrahimovic joined Ajax and with this began his major league career. In his first Champions League for Ajax in 2002, he scored five goals in total and later in 2004 he got the ‘Goal of the Tournament’ honour. The 2004 Champions League turned out to be his final season for Ajax due to a controversy. Thereafter, he joined Juventus.
Ibrahimovic was unable to continue his form and his performance declined while playing for Juventus which eventually forced him to move to Internazionale. The deal turned out to be fruitful for Ibrahimovic and in 2008-2009 serie A season, he emerged as the leading goal-scorer with 25 individual goals.
He was eventually signed by Barcelona and in the 2009 Championship League, he finished with 11 goals and 8 assists in the first 15 league matches for Barcelona. He then moved over to play for Milan and made his debut against Cesena in September 2010 in the Championship League, which he eventually finished with 13 goals and 8 assists.
He continued switching through clubs and finally ended up with Manchester United in July 2016. In his Premier League debut match he scored a total of 20 goals in the tournament. Ibrahimovic won his very first major title in form of Europa League 2016 and was named in the ‘Squad of the Season.’
Personal Life
Zlatan Ibrahimovic is in a long-term relationship with Helena Seger, with whom he has two sons. He currently lives in Manchester and has a mansion in Malmo, his hometown where he goes for holidays.
A documentary film titled ‘Becoming Zlatan’ documents his life and gives a glimpse of his troubled past. The film got released in several international film festivals.
In a league match in 2015, Ibrahimovic removed his shirt to reveal a tattoo with names of 50 people who died from hunger, in order to spread awareness about famine.
Other than his game, Ibrahimovic is known for his hatred towards media and is constantly in news due to his erratic behaviour. He has also been booked a few times for being violent on field.

See the events in life of Zlatan Ibrahimović in Chronological Order 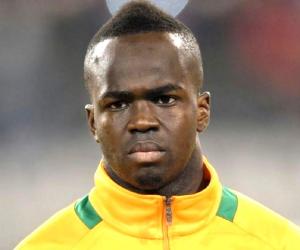