Baseball player Lawrence Peter Berra better known as “Yogi” Berra was the three times winner of the American League Most Valuable Player Award, with ten world championships and 15-time All-Star wins also to his credit. The player acquired the nickname “Yogi” when his childhood friend Bobby Hofman, identified Berra with an Indian snake charmer (Yogi) since Berra, like the Yogi used to squat with legs crossed after losing games. He was the first man to win pennants in different leagues in his 40 years’ baseball career. His style of leaving a finger outside his glove was later imitated by other catchers. He is a man of principles; he did not enter the New York Yankee Stadium for 14 years after his baseless dismissal from the New York Yankees team until the owner personally apologized to him. This great baseball player has also proved his might as a writer by penning down ‘The Yogi Book: I Really Didn't Say Everything I Said’, an American best seller. His comments on life and baseball, called “Yogi-isms” have gained entry in Bartlett's Familiar Quotations—all credit to the sportsman whose comments have been acknowledged in the repository of wisdom. He was also a humanitarian who contributed to charity and youth organizations. American Celebrities
American Men
Male Sportspersons
American Sportspersons
American Baseball Players
Childhood & Early Life
Yogi Berra was born on May 12, 1925, in St. Louis, Missorie, to Pietro and Paolina Berra, Italian immigrants, settled in the United States of America. His father was a worker in brick yard. His siblings include Mike, Tony, John, and Josie.
He studied in South Side Catholic High School, presently known as St. Mary’s High School. Joe Garagiola, the future baseball player was his class mate.
As a young boy, he used to play baseball in the neighbourhood along with his brothers and friends. He could study only till the eighth grade and then dropped out of school to support his family. 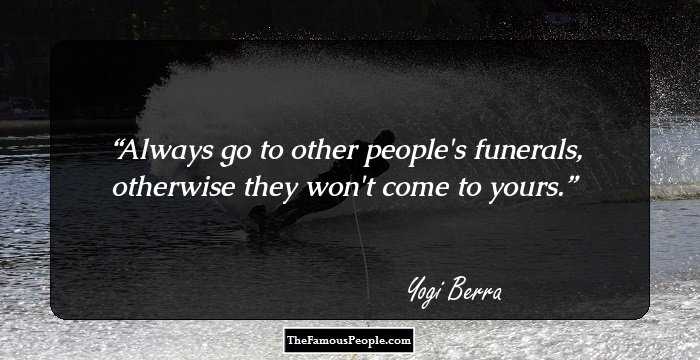 The Sexiest Men Of 2020, Ranked
Career
He started his baseball career at the age of 14 in a youth league sponsored by the American Legion.
In 1942, the general manager of St. Louis Cardinals offered him $250 to sign for his team, but Berra refused it, as he demanded the same sum of $500 that was offered to his friend Garagiola.
He gained entry into the New York Yankees team in 1942 after signing the offer for $500.
From 1943 to 1946, he served in the United States Navy and rendered his service in North Africa and Europe, participating in the D-Day landing in Normandy.
In 1946, he made his debut appearance in a Major League for the New York Yankees against the Philadelphia Athletics. In the World Series conducted in 1947, he became the first person to hit a pinch-hit home run against Ralph Branca, the pitcher from Brooklyn Dodgers.
Until 1963, he played for New York Yankees and retired from professional baseball career. In his career with the Yankees, he helped the team win14 American League championships and 10 World Series.
In 1964, he became the manager of the New York Yankees and led the team to victory in the American League pennant race of that year. In the same year, his team lost to Cardinals in the seven-game World Series after which he was dismissed from the Yankees.
In 1965, on his friend Casey Stengel’s suggestion, he became the player-coach for New York Mets. In 1972, he became the manager of Mets and was he was inducted into the Baseball Hall of Fame the same year.
Under Berra’s able guidance, Mets was able to rise from its last position to win the National League in 1973. In 1975, he was fired from his position as the manager of the New York Mets.
Continue Reading Below
He became the coach for the New York Yankees in 1976 and led the team to the World Series of 1977 and 1978 triumphantly.
He once again became the manager of the New York Yankees in 1984 and managed the team until 1985, when he was fired from his position by the owner, George Steinbrenner.
In 1986, he became the coach for Houston Astros and was with the team until his retirement in 1992.
After his retirement, he got himself involved in many philanthropic activities. In 1998, he opened the Yogi Berra Museum & Learning Center in Little Falls, New Jersey where he hosts many baseball camps and sports-related workshops. 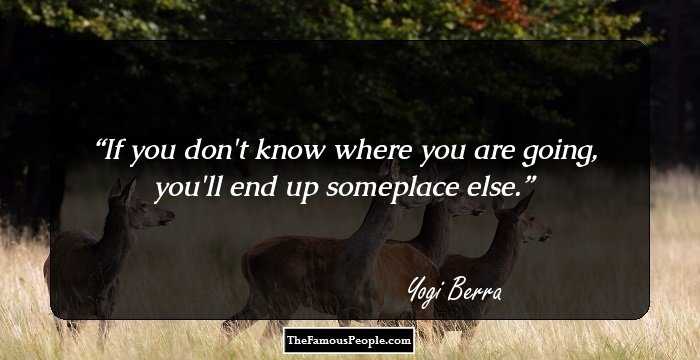 Quotes: You
Awards & Achievements
He won his first MVP award in 1951 after hitting .297 with 27 home runs and 88 run batted in (RBI).
He won the award of Most Valuable Player in the American League three times in the years of 1951, 1954, and 1955.
In 1967, he was the winner of the Slocum Award, an award presented by the New York Baseball Writers Association annually to a player in acknowledgement of his meritorious service to baseball.
He was inducted into the Hall of Fame in 1972 and since then has been a member of Major League Baseball's All-Century Team.
In 1996, the Montclair State University honored him with a doctorate degree.
Personal Life & Legacy
He married Carmen on January 26, 1949 and the couple had three children—Larry, a former minor-league catcher, Tim, a former NFL receiver, and Dale, a former major-league infielder. Carmen died on March 6, 2014.
A baseball stadium in the campus of the Montclair State University was named after him in 1998 and in the December of the same year, the “Yogi Berra Museum & Learning Center” hosted many sports activities as a tribute to the legend.
Yogi Berra died of natural causes, in New Jersey, on September 22, 2015. 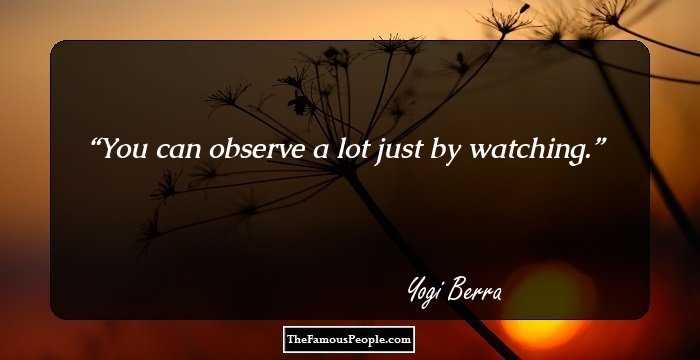 Quotes: You
Trivia
A cartoon character from Hanna-Barbera was created using this American baseball player’s name.
This baseball player wore number 8 jersey for the matches he played for the New York Yankees from 1948 to 1972.
You May Like

See the events in life of Yogi Berra in Chronological Order