Ernie Banks was one of the most admired black professional baseball players in the history of American baseball. Popularly known as Mr Cub or Mr Sunshine, he spent his entire playing career as a member of the Chicago Cubs. He was a Major League Baseball (MLB) shortstop and first baseman for 19 seasons - 1953 through 1971. Having been blessed with a knack for sports, he started playing baseball at a young age. Initially, he played for Kansas City Monarchs. His first professional debut as a major league player was in 1955. In his more than two decades of career, his career record stood at 512 home runs of which 277 home runs came as a shortstop. He led the NL in putouts five times and was the NL leader in fielding percentage as shortstop three times and once as first baseman. He was inducted in the national Baseball Hall of Fame and was bestowed the prestigious Presidential Medal of Freedom. Alex Rodriguez
Baseball Players #102
Sportspersons #1403
DID WE MISS SOMEONE?
CLICK HERE AND TELL US
WE'LL MAKE SURE
THEY'RE HERE A.S.A.P
Quick Facts

American Celebrities
Male Sportspersons
American Sportspersons
American Baseball Players
Aquarius Men
Childhood & Early Life
Ernie Banks was second child of the twelve children born to Eddie and Essie Banks in Dallas, Texas. His father was a construction worker and a warehouse loader. He even played baseball for black semi-pro-team.
Banks was athletic as a child but loved playing basketball and football more than baseball. He was also an avid swimmer. While his father bribed him to make a career in baseball, his mother wanted him to follow the footstep of his grandfather and become a minister.
Academically, he completed his formal education from Booker T. Washington High School in 1950. While at school, he excelled in basketball, football and track. Since the school did not have baseball team, he played softball for a church 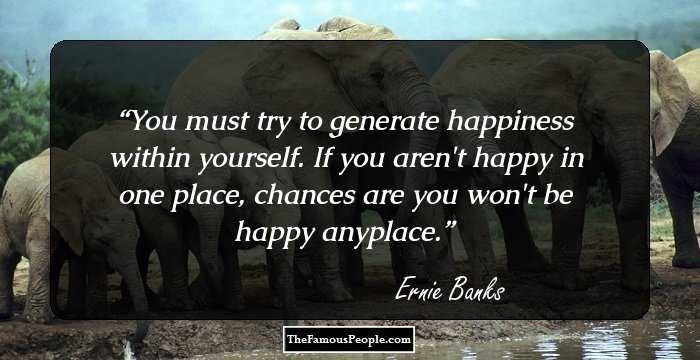 Quotes: You, Yourself, Happiness
Continue Reading Below
You May Like

Who Is The Most Popular BTS Member?
Career
In 1951, he was called for military duties and served the U. S. Army in Germany and Korea. After two years of service, he was relieved off his duties.
He caught the attention of Bill Blair who scouted for the Kansas City Monarchs of the Negro American League. He was called to play for the Monarchs which he eventually did, finishing the season with a batting average of .347.
In 1953, he left Monarchs to sign with the Chicago Cubs, where he made a major league debut in Wrigley Field playing ten games. He was one of the few players who played with MLB team without playing minor league.
The following year, he partnered along with Gene Baker and eventually became the first all-black double-play combination in major league history. He ended up with 19 runs and a second spot at the Rookie of the Year voting
Year 1955 was a good one in terms of performance as he totalled 44 home runs, with 117 RBIs batting at an average of .295. He played the first of the 14 All-Star Games. The same year, he set a thirty year record of five single-season grand slam home runs. As for Cubs performance, the team finished with 72:81 win loss record.
His record of playing 424 consecutive games was ended by a hand infection when he had to miss 18 games in 1956. He ended the season with 28 home runs, 85 RBIs, and a .297 batting average. He bettered his performance following year with 43 home runs, 102 RBIs, and a .285 batting average
Year 1960 was an important one in his career calendar as he hit the league-leading 41 home runs, with 117 RBIs, leading the league in games played for the sixth time in seven years.
By 1961, he had yet again made a record of 717 consecutive games, by withdrawing from four games due to knee problems. His position in the team changed from being at the shortstop to a left fielder. Later, he moved on to the first base where he remained indefinitely as per the decision by the College of Coaches.
In 1963, he made a record for putouts by a first baseman, finishing the season with18 home runs, 64 RBIs, and a .227 batting average. The following year, he finished the season with 23 home runs, 95 RBI's, and a .264 batting average.
Continue Reading Below
In 1965, he hit 28 home runs, had 107 RBI's, a .265 batting average, and played in the All-Star Game. The same year in September, he made an important record in his career by hitting his 400th home run.
In 1966, Leo Durocher took over as Chicago Cubs manager. His first season brought about dismissal results for both the team and his personal career as the Cubs finished 59-103.
In 1967, he was named as the player coach. The following year, he finished the season with 32 home runs, 83 RBI's, and a batting average of .246. In 1970, he went on to hit his 500th home run, thus marking yet another milestone in his career.
In December 1971, he officially retired from Chicago Cubs as a player but retained his position of a coach which he continued to serve until 1973. He also took on the role of an instructor in the minor leagues for the next three seasons.
At the time of retirement, his career record stood at 512 home runs of which 277 home runs came as a shortstop. He led the NL in putouts five times and was the NL leader in fielding percentage as shortstop three times and once as first baseman.
After the end of his sporting career, he tried taking up a government office. Later, he started working for Seaway National Bank in the offseason and enrolled in a banking correspondence course. He later worked for an insurance company and for New World Van Lines.
In 1967, he became the first black owner of a U.S. Ford Motor Company dealership. Two years later, he was appointed to the board of directors of the Chicago Transit Authority. 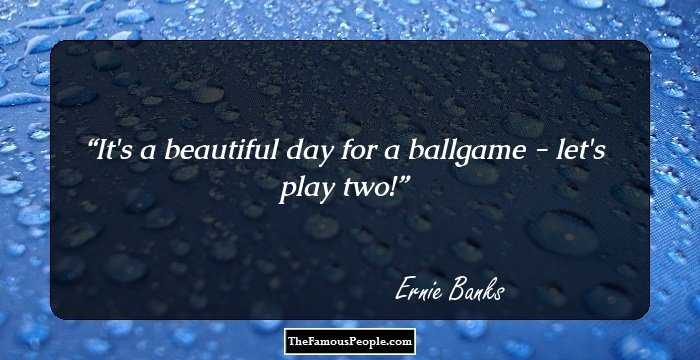 Quotes: Beautiful
Awards & Achievements
In August 1977, he was inducted into the National baseball hall of Fame.
Continue Reading Below
In 1982, he became the first player to have his number retired by a team, as the Cubs retired his uniform number 14.
In 1999, he was named to the Major League Baseball All-Century Team. The same year, the Society for American Baseball Research listed him 27th on a list of the 100 greatest baseball players.
In 2013, he was conferred with the prestigious Presidential Medal of Freedom.
Personal Life & Legacy
He married Mollye Ector in 1953. The marriage did not last long and the two filed for a divorce after a couple of years.
Following this, he eloped with Eloyce Johnson. The two were blessed with twins - both sons. Four years later, they were blessed with a daughter.
In 1981, he separated from Eloyce as well. Later in 1984, he married Marjorie. Not much is known about their marital life except for the fact that in 1997, he married Liz Ellzey. In 2008, the couple adopted an infant daughter.
Ernie Banks died of a heart attack on January 23, 2015, eight days before his 84th birthday. 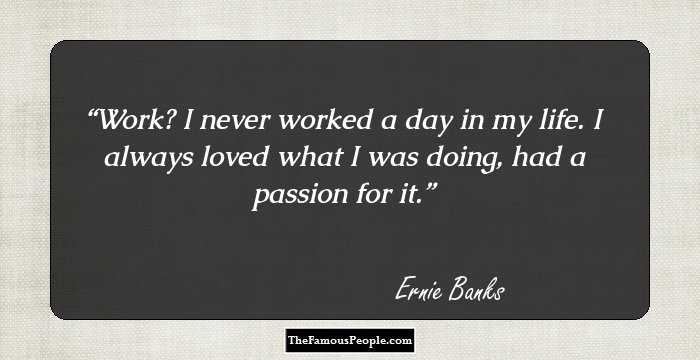 Quotes: Life, Never, I
Trivia
This Chicago Cubs baseball player became the first player to have his number retired by the team. Only six players until now have shared the status since then.
You May Like

See the events in life of Ernie Banks in Chronological Order