Woody Hayes was an iconic American football player and coach, who gave his life to the game. A prodigious child, he excelled in the sports right from his early years. It was his absolute know-how of the technique and knack for the game that gained him the position of an assistant coach very early in life. After his service at the World War II, he was recruited by Denison University first wherein he served as a head coach for two years from 1946 until 1948. Later on, he was recruited by the Miami University in 1949. Under his guidance the team secured a string of victories and he became the head coach of Ohio State University. From 1951 until 1978, he continued to serve in the capacity leading the team from one victory to the other. During his 28 seasons with the Ohio State University team, he guided them through five national championships victories, 13 Big Ten Conference titles and a record of 205–61–10. His overall college football career stands at 238 wins, 72 losses, and 10 ties. Furthermore, he was an educator as well, serving as a professor of physical education and military history.
Continue Reading Below American Celebrities
American Men
Denison University
American Coaches
Male Sportspersons
Childhood & Early Life
Woody Hayes was born on February 14, 1913, to Wayne B. and Effie Hayes in Clifton, Ohio. He was the youngest of the siblings.
He completed his early education from Newcomerstown High School after which he enrolled at the Denison University. A prodigious child, he played from the center position during his school days later on played tackle under coach Tom Rogers at the university games. 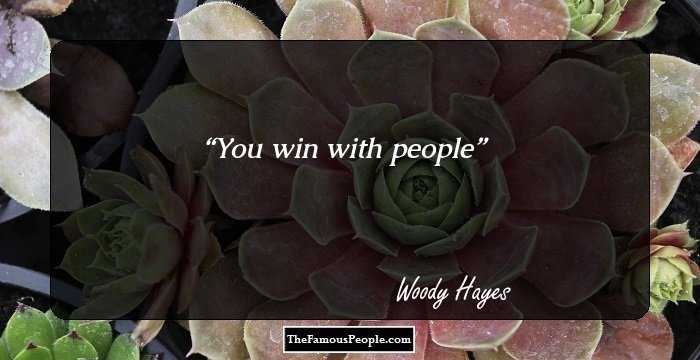 The Sexiest Men Of 2020, Ranked
Career
Graduating from the university in 1935, he took up the position of an assistant for the Ohio high school, Mingo Junction. After his yearlong service at the Mingo Junction, he took up the same position at New Philadelphia High School in 1937.
The resignation of John Brickels from the position of the head coach of New Philadelphia High School brought good news for Hayes as he was promoted to the former’s position. In the new capacity as the head coach, he led the team to set a 17-2-1 record in his first two seasons.
In 1941, he was drafted in the Unites States Navy. At the time of World War II, he was promoted to the rank of the Lieutenant Commander.
With the culmination of World War II, Denison University planned to re-establish its football program. For the same, they offered him the position of head coach, which he gladly accepted.
In 1946, he assumed his position as the head coach of the football team at the Denison University. He took time to adjust in the new role, which directly affected the team performance. In the first year of his term as the coach, the team won only two games.
The finale against Wittenberg was the starting of good things for both him and the university team as the victory sparked a 19-game winning streak, which automatically scaled the team position and the coach’s reputation in the gaming circuit.
The outstanding performance of the team brought him the prestigious offer to serve as the head coach of Miami University. The position was one-of-its kind and was fondly referred to as ‘Cradle of Coaches’, as it kick-started the career of a number of great coaches in the past.
Meanwhile, on the academic front, he enrolled at the Ohio State University to earn a Master’s degree in educational administration. He obtained the same in the year 1948.
He developed a rivalry against Gillman, the former coach of Miami, who had given up the position to coach the University of Cincinnati. He led the team to record a victory against Arizona State University at the Salad Bowl. It was this victory that gained him an offer to serve as the head coach for Ohio State in 1951.
Continue Reading Below
Interestingly, he was not just offered the position of the head coach at the Ohio State University but that of a professor of physical education as well, given his excellent academic record. He even taught mandatory English and vocabulary classes to his freshman football players.
In his capacity as the head coach of the Ohio State Buckeyes, the team performed outstandingly well, setting a 205-61-10 record. Under his guidance, the team recorded victory at the three consensus national championships in 1954, 1957 and 1968.
In addition to the three consensus national championships, the Ohio State Buckeyes also won two non-consensus national titles in 1961 and 1970, 13 Big Ten Conference Championships and made 8 Rose Bowl appearances.
He practiced a conservative style of coaching and was one of the early coaches to recruit African-American players in the team. What’s more, other than players, he was the first to appoint African-American assistant coaches in the team.
During his tenure as the head coach, about 58 players under his expertise won the All-American honor. Furthermore, numerous football coaches such as Lou Holtz, Bill Arnsparger, Bill Mallory, Dick Crum, Bo Schembechler, Ara Parseghian and Woody's successor, Earle Bruce, served as his assistants at various times.
During his years of active coaching, he went into a brawl a number of times and had been a part of numerous controversies. These basically arose due to his volatile temper and incontrollable actions when angry.
It was after the 1978 Gator Bowl incident when he made abusive comments at the referee and injured one of his own players when the latter tried to intervene that he was told to resign by Ohio State University’s Athletic Director Hugh Hindman.
He did not accept the proposal and thus was sacked from his job, on account of assaulting a college athlete. He was succeeded by Earle Bruce as head football coach at Ohio State University.
He continued to serve as the professor of Military History at the Ohio State, until his death.
Awards & Achievements
He was the three times recipient of the College Football Coach of the Year Award, which is today known as the Paul ‘Bear’ Bryrant Award.
In 1983, he was inducted into the College Football Hall of Fame.
Personal Life & Legacy
He tied the nuptial knot with Anne Gross in 1942. The couple was blessed with a son, Steve, who went on to serve as a lawyer and later became a judge.
His health gradually depreciated during the later years of his life. On March 12, 1987, he breathed his last and died of heart attack. He was interred at the Union Cemetery in Columbus, Ohio.
Trivia
This highly skilled American football player served as the head coach for Denison University, Miami University and Ohio State University.
You May Like

See the events in life of Woody Hayes in Chronological Order