Wilma Rudolph, the name which has inspired a generation of athletes, especially women, is one of the greatest and the most revered athletes of the twentieth century. Who knew that this premature baby, who later suffered from polio, would overcome all odds to become a champion athlete? Her left leg which was partially deformed was cured when she was twelve and to everyone’s surprise, this little girl who was hardly able to walk without braces, walked all by herself! Soon she was playing with other kids, about which she once said, “By the time I was 12, I was challenging every boy in our neighborhood at running, jumping, everything.” She came into the limelight after winning a bronze in the 1956 Melbourne Olympic Games. She made history in the 1960 Rome Olympics when she won three gold medals and came to be known as ‘The Tornado’ and ‘the fastest woman on earth’. However, her retirement came quite early (when she was just twenty two) and she chose not to participate in Olympics for the third time. The time when she flourished as an athlete, neither the media nor any big agencies endorsed athletes, like the way they do nowadays. Therefore, even after setting records at the Olympic Games Rudolph’s livelihood was quite modest. She had to rely on jobs, other than just pursuing the sport.

Breaux Greer
Athletes #14
Sportspersons #498
DID WE MISS SOMEONE?
CLICK HERE AND TELL US
WE'LL MAKE SURE
THEY'RE HERE A.S.A.P
Quick Facts

American Celebrities
Athletes
Black Athletes
Black Sportspersons
American Women
Childhood & Early Life
Wilma was born a premature baby weighing just 4.5 pounds to Ed who was a gatekeeper at railways and Blanch who worked as maid.
When she was four she contracted infantile paralysis because of the polio virus, from which she recovered but her left leg and foot needed to be supported with a brace.
She had the brace till she was nine and for another two years she had to wear an orthopedic shoe. However, by the age of twelve she had recovered fully and in 1952 she become normal.
She began playing basketball like her elder sister in Burt High School where Ed Temple a Tennessee State track and field coach, discovered that she is naturally a sprinter and decided to train her.
Thus, she began attending the Temple’s summer program at Tennessee State and turned out be an amazing runner for which her coach encouraged her to participate in the 1956 Summer Olympics, held in Melbourne, Australia.
She participated in 1956 Melbourne Olympics and was was successful in winning in a bronze medal in the 4 x 100 m relay thus, establishing her career as a sprinter. 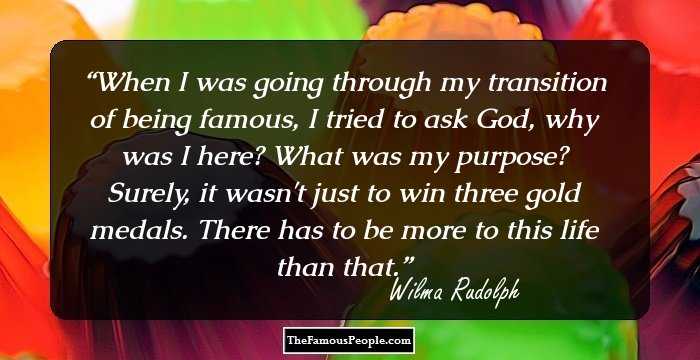 Quotes: Life, God, I
Continue Reading Below
You May Like

The Best Black Actresses Of All Time
Career
After her success in the 1956 Olympics, she participated in the 1960 Rome Olympics. She won the 100 meter-dash in 11 seconds and the 200 meter-dash in 23.2 seconds, the second one being a new Olympic record.
She also won the 4x 100-meter relay in 44.5 seconds, along with fellow sprinters Martha Hudson, Lucinda Williams and Barbara Jones, to set a new world record.
After coming back home she took part in the U.S.–Soviet meet where she won two races, before retiring in 1962.
She became a teacher of Grade 2, in a school but owing to some conflicts, she had to quit her job. She went to Indianapolis where she supervised a community center and later went to St. Louis Missouri, before returning to Tennessee for some time.
She went to California and then moved to Chicago and finally lived in Indianapolis, where hosted regional television show. 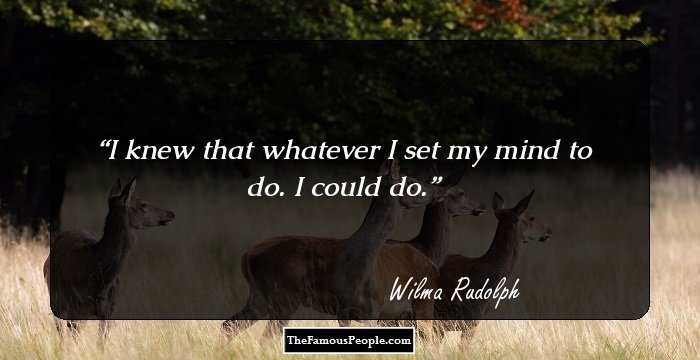 Quotes: I
Awards & Achievements
In 1960, she was titled the ‘United Press Athlete of the Year’ as well as the ‘Associated Press Woman Athlete of the Year’.
She was also the ‘Associated Press Woman Athlete of the Year’ for 1961 and received the ‘James E. Sullivan Award’, the highest honor for an amateur athlete in the U.S.
In 1973, she was inducted into the ‘National Black Sports and Entertainment Hall of Fame’ and a year later, she entered the ‘National Track and Field Hall of Fame’.
Continue Reading Below
Her induction to the ‘United States Olympic Hall of Fame’, which honors the topmost athletes in America, took place in 1983.
She was awarded the ‘National Sports Award’ in 1993 and was inducted to the ‘National Women's Hall of Fame’ the next year.
Personal Life & Legacy
Rudolph was first married to William Ward in 1961, whom she divorced 17 months later.
She married Robert Eldridge, her boyfriend from high school in 1963 and had four children with him. The couple divorced after 17 years.
In 1994, she found she had a brain tumor which developed into cancer and claimed her life when she was 54. She also had throat cancer at the time of her death. She was survived by her four children, eight grandchildren and was visited by thousands of mourners at her funeral in Tennessee State University's Kean Hall.
On August 11, 1995, the Tennessee State University named a six-story dormitory the ‘Wilma G. Rudolph Residence Center.’ in her honor.
There is a ‘Wilma Rudolph Courage Award’, presented by the Woman's Sports Foundation in U.S. for the best women athletes. The awarded was given for the first time to Jackie Joyner-Kersee in 1996.
Popular magazine ‘Sports Illustrator’ voted Rudolph as the number one sportsperson in top fifty greatest sports figures to have originated from Tennessee in the 20th century. 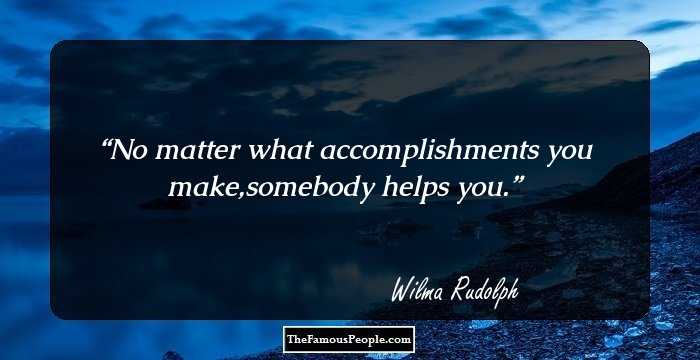 Quotes: You
Trivia
This legendary female sprinter from Tennessee had suffered from polio in her leg for most of her childhood, before becoming the world’s no.1 sprinter!
You May Like

Quotes By Wilma Rudolph | Quote Of The Day | Top 100 Quotes

See the events in life of Wilma Rudolph in Chronological Order