Willie Howard Mays Jr., popularly known as ‘The Say Hey Kid’ in the baseball circle, is a retired professional baseball player who played as a center fielder with the New York and San Francisco Giants for most of his career. He played for the first time professionally with the Negro American League. He was fascinated by the game because his father was an exceptional baseball player who used to play for the local Negro teams - Mays witnessed a lot of his early games and learnt a few tricks from his father. He played in the minor leagues for two seasons before the New York Giants picked him up and in his first season with them, he was called the “Rookie of the Year”. He was outstanding in both batting and fielding and after the Giants could not afford him in 1972, he was traded off to the New York Mets. Mays retired from baseball a year after playing for the Mets. His stupendous success as a baseball player fetched him many honors like-- the Bobby Bragan Youth Foundation’s Lifetime Achievement Award, a doctorate from Dartmouth College, special tribute in All-Star Game in San Francisco, etc. American People
Black Sportspersons
Black Baseball Players
American Men
Male Sportspersons
Childhood & Early Life
Willie Mays was born on May 6, 1931 in Alabama to Ann and Willie Sr. His father was a baseball player with the local Negro team and mother was a talented basketball player in her high school. His parents separated when he was 3.
He was raised by his mother’s younger sister, Sarah, and was influenced to play baseball by watching his father play it with perfection. He attended the Fairfield Industrial High School and played various sports there. 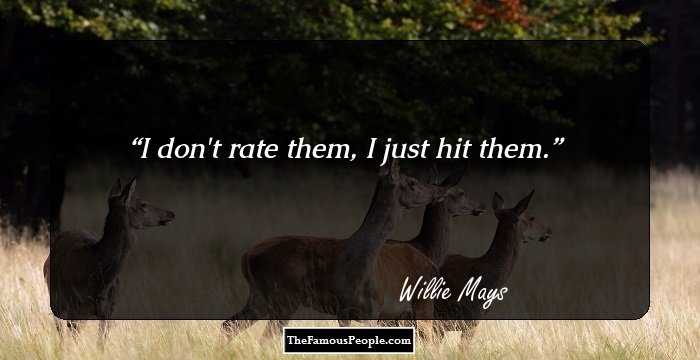 The Best Black Actresses Of All Time
Career
In 1947, Mays got an opportunity to play baseball professionally with Chattanooga Choo-Choos, Tennessee, and later he joined the Negro American League. He was ultimately signed by The New York Giants and assigned to Class-B affiliate, New Jersey.
In 1951, Mays scored .247 average, 68 RBI and 20 homers in 121 games and though this was the lowest of his career but he still won the Rookie of the Year Award. He became famous in Harlem.
He was drafted during the Korean War in 1952 and missed two seasons of the game. He returned to the Giants in 1954 and scored .345 batting average and 41 homers and won the National League emblem of the year.
In 1955, Mays scored 51 homers and in the next season 36 homers and 40 bases and became the second player to join “30-30 club”. He performed brilliantly during the last three years when Giants was in New York.
Mays won the Gold Glove Award in 1957. He became the 4th player in the Major League history to join the 20-20-20 club, a task that no player could accomplish in the last 16 years.
In 1958, Mays relocated with the Giants to San Francisco and contested for the National League batting title, in which he collected three hits and finished with his career-high score of .347.
He was made the team captain in 1961. That year, the Giants finished on the third position and won 85 games. Mays also had one of his best games in that year, hitting 4 homers against the Milwaukee Braves.
In 1965, Mays won his second MVP award and he hit his 500th career home run. In the next season he finished third in the National League MVP voting.
The 41-year-old Mays was traded to the New York Mets in 1972, for pitcher Charlie Williams and $50,000 - it was because the Giants was losing money and could not assure him an income after retirement.
Continue Reading Below
In the same year, Mays made his Mets debut and had put New York ahead at Shea Stadium and in the next season, in a game against the Cincinnati Reds, his hit had 660th homer.
In 1973, Mays was honored by The New York Mets franchise by organizing ‘Willie Mays Night’, where he announced his retirement and thanked his New York fans.
From 1973-1979, May remained in the New York Mets organization, after his retirement from the baseball, as the team’s hitting instructor. He shaped the baseball careers of future Mets’ stars like Lee Mazzilli. 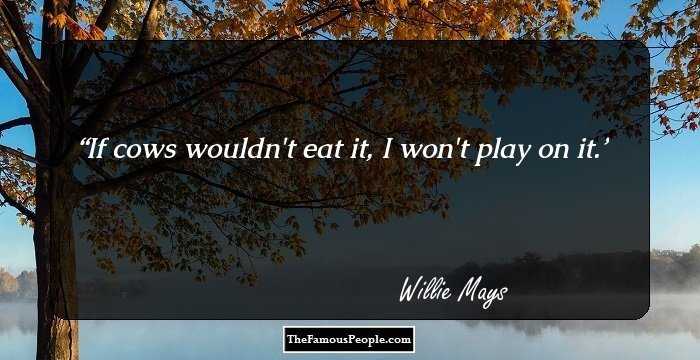 Quotes: I
Awards & Achievements
In the 2000s, he was honored with—the Bobby Bragan Youth Foundation’s Lifetime Achievement Award, a doctorate from Dartmouth College, special tribute in All-Star Game in San Francisco, induction in the California Hall of Fame and in the African-American Ethnic Sports Hall of Fame.
1956 was the greatest season of Mays with the New York Giants. He became the only second player and the first National League player to join the “30-30 club”. He led the league with 36 homers and stole 40 bases.
Personal Life & Legacy
Mays first marriage was to Margherite Wendell Chapman (from 1956-1963) and the couple had adopted a son named Michael together.
He married again in 1971 to Mae Louise Allen. His second wife died in 2013 after battling for years with Alzheimer’s.
Trivia
He was famous by his nickname, ‘Say Hey Kid’.
He has appeared on television programs like, ‘What’s My Line?’, ‘The Donna Reed Show’, ‘Bewitched’, ‘My Two Dads’, ‘Mr. Belvedere’, ‘The Colgate Comedy Hour’, etc.
He was the Tee Ball Commissioner at 2006 White House Tee Ball Initiative in 2006.
He is one of 66 holders of American Airlines' lifetime passes as he is an avid traveler.
He became deeply interested in golf after his retirement.
Mays was friends with fellow player Bobby Bonds and is a godfather to his son Barry Bonds.
You May Like

See the events in life of Willie Mays in Chronological Order