Known for his trademark humor combined with a strong element of political satire, Bill Maher is one of the most shrewd and insightful political talk show hosts in the United States of America. This legendary political pundit has worked with many TV networks as a political commentator including CNN, FOX News Channel and has also appeared on the famous show, ‘Larry King Live’. He is most noted for his critical and controversial comments on the award winning political talk show ‘Politically Incorrect’. He is also the host of ‘Real Time with Bill Maher’ and played himself in the documentary film, ‘Religulous’. A critic of anything religious, Maher has known to have made many critical remarks about religious views but strangely denies that he is an atheist. He is one of the strong advocates of health care reforms, an environmentalist, an animal lover and PETA board member. He is known for his outspoken nature and came under the spotlight for his infamous support for the legalization of marijuana and same-sex-marriage. With an estimated net worth of $23 million, Maher has established himself as one of the most influential and sought after talk show hosts in the American media industry. To learn more interesting facts about him continue to read this biography. American People
Comedians
American Men
New Yorkers Actors
Cornell University
Childhood & Early Life
Bill Maher was born in New York City, United States to William Maher and Julie Berman. His father was a radio announcer and network news editor, while his mother was a nurse. He was raised as a Catholic and was not aware of his mother’s Jewish identity until he was a teenager.
He grew up in the neighbourhood of the River Vale, New Jersey, where he attended the Pascack Hills High School, after which he graduated from Cornell University with a B.A in English in 1978. 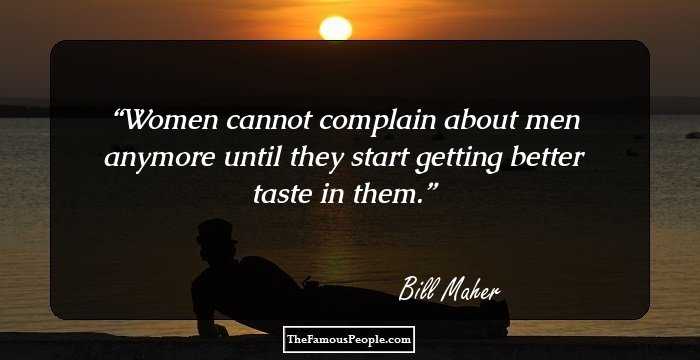 Quotes: Women
Continue Reading Below
Career
In 1979, he began his career in the genre of stand-up comedy as a host in the New York City’s comedy club ‘Catch a Rising Star’. Soon, he regularly appeared on TV comedians Johnny Carson's and David Letterman’ shows.
In 1983, he made his debut with the future film ‘D.C Cab’, directed by Joel Schumacher. The film received controversial reviews after it released and it did not do much for his career.
In the 1980s, he appeared in minor roles in television shows like ‘Sara’, ‘ Max Headroom’ and the films ‘Ratboy’ and ‘Cannibal Women in the Avocado Jungle of Death’
In 1991, he appeared in the sitcom ‘Charlie Hoover’ and that year he also played the role of ‘Elmo Bunn’ in the comedy film ‘Pizza Man’, directed and written by J.F. Lawton.
In 1993, he was seen in the American sitcom ‘Married... with Children’, which was broadcast on Fox Network and he also played the role of a photographer in the ABC sitcom ‘Roseanne’.
On July 25, 1993, he began hosting the late-night political talk show ‘Politically Incorrect’, which was originally broadcasted on comedy central but was later shifted to ABC network.
In 1998, he played himself in the comedy film ‘EDtv’, directed by Ron Howard. The film starred Matthew McConaughey, Woody Harrelson, Ellen DeGeneres and Jenna Elfman.
In 2000, he was seen in the HBO special ‘Be More Cynical’ and the following year he played himself in ‘The Party's Over’, a documentary on American Democracy and was also seen in the film ‘Tomcats’.
In 2003, he began hosting ‘Real Time with Bill Maher’, a talk show that was broadcasted on HBO. The show holds panel discussions on current events and political happenings.
Continue Reading Below
In 2005, he hosted the HBO special ‘I'm Swiss’ and the same year he appeared in the documentary film ‘The Aristocrats’, directed by Penn Jillette and Paul Provenza.
In 2008, he appeared in the supernatural television drama series ‘True Blood’ and that year he also played himself in the comedy film, ‘Swing Vote’ and the documentary film, ‘Religulous’.
In 2010, he came out with his stand-up comedy special ‘Bill Maher: But I'm Not Wrong’, which was broadcasted on the HBO network. The show dealt with various current political happenings in the country.
On February 1, 2013 she was seen in the first season of the political drama series ‘House of Cards’ and in the same year he played himself in the movie ‘Iron Man 3’. 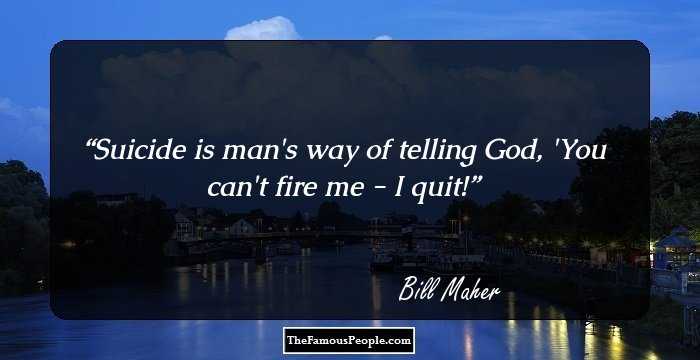 Quotes: Me, God, I
Major Works
He was the host of the late-night political talk show ‘Politically Incorrect’, which was awarded the Emmy Award in the year 2000. The talk show also received two CableACE Awards for ‘Best Talk Show Series’ and was nominated for the ‘Writers Guild of America’ award.
He is the host of the talk show ‘Real Time with Bill Maher’, which has earned ten Primetime Emmy Awards and has also been a six time nominee of ‘Writers Guild of America’ award.
Awards & Achievements
In 2005, he was ranked number 38 on the Comedy Central's list of ‘100 greatest stand-up comedians of all time’.
In 2009, he was the recipient of the Richard Dawkins Award, conferred to him by the Atheist Alliance International.
In 2010, he received a star on the Hollywood Walk of Fame. 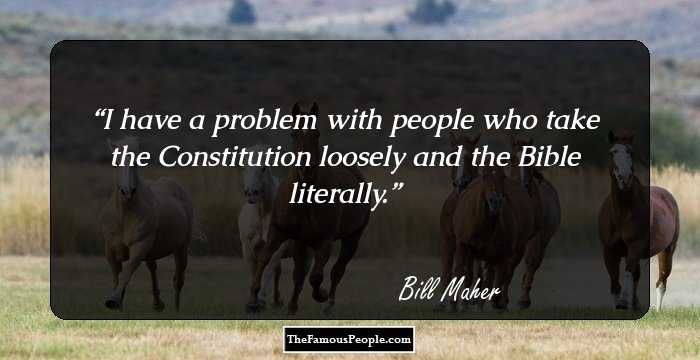 Quotes: I
Personal Life & Legacy
In 2003, he became romantically involved with Coco Johnsen, a model and their relationship came to an end in the year 2004.
He briefly dated author and model Karrine Steffans, after which he was in a relationship with neuroscientist and science educator, Cara Santa Maria from 2009 to 2011.
Trivia
This acclaimed American political talk show host and film actor was once sued for $9 million by his ex-girlfriend, who alleged that he inflicted ‘pain, suffering’ on her. The lawsuit was withdrawn in the year 2005.

See the events in life of Bill Maher in Chronological Order