William Claude Dukenfield, better known as W. C. Fields was a juggler and comedian widely regarded as one of the greatest personalities of early American cinema. Born into a poor family he ran away from home when he was just 11. He began his career as a juggler and was known to practice for hours perfecting his skills. By the time he was 15 he was supporting himself by performing juggling acts at church and theater shows. He called himself ‘The Eccentric Juggler’ and developed a juggling routine that included anecdotes and comedy as well. He used to juggle cigar boxes, hats and other strange objects that gave him a novel appeal. He toured all over the world and by the early 1900s he earned the reputation for being the world’s greatest juggler. He furthered his career by appearing in Broadway productions before moving on to make film appearances. His stage persona was that of a hard-drinking misanthropist who could earn his audience’s sympathies in spite of his contempt for women, children and dogs. He became a major movie star by the 1930s. However he became a victim of alcoholism which threatened his personal as well as professional life and the once-great comedian died as a result of alcohol related complications. Cause of Death: Gastric Haemorrhage

American Celebrities
Comedians
American Men
Pennsylvania Actors
Male Comedians
Childhood & Early Life
He was born as the oldest son of James Lydon Dukenfield. His father used to serve in the army and was wounded. He later worked as an independent produce merchant and part-time hotel keeper.
He began working as a child in order to support his poor family. He was employed at a department store and also worked in an oyster house.
He ran away from home when he was 11. He taught himself to juggle and spent hours practicing the art till his fingers bled. He began performing juggling acts at the church and theater shows when he was 15. 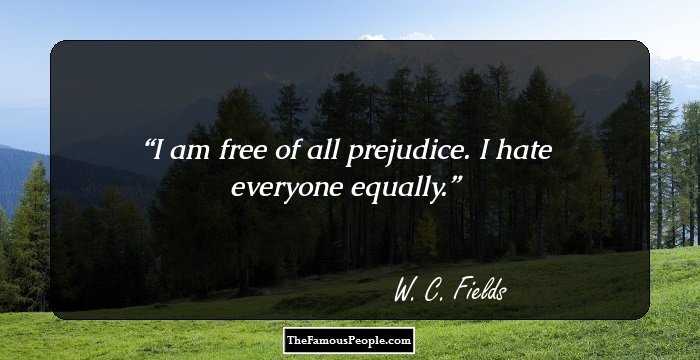 The Best Black Actresses Of All Time
Career
He started his career as a juggler in vaudeville and developed a unique routine by combining juggling with comedy. He used to juggle using objects like cigar boxes and hats which added to his charm.
He was soon traveling all over North America and Europe under the name ‘The Eccentric Juggler’. He made a name for himself and was called the world’s greatest juggler by the early 1900s.
He made his Broadway debut in a musical comedy, ‘The Ham Tree’ in 1906.
From 1915 onwards he adopted a stage costume that consisted of a top hat, cut-away coat and collar, and a cane—an appearance that seemed to be inspired by the cartoon character Ally Sloper.
He starred in Florenz Ziegfeld’s Broadway production ‘Ziegfeld Follies’ revues from 1916 to 1922. He entertained his audiences with a billiards skit complete with funnily shaped cues and trick shots.
He played Eustache McGargle, a small-time con man with a colourful personality in the Broadway musical comedy ‘Poppy’ in 1923.
During the 1920s he made several movie appearances including ‘Sally of the Sawdust’ (1925), ‘It’s the Old Army game’ (1926), ‘Running Wild’ (1927) and ‘The Golf Specialist’ (1930).
In collaboration with the comedy pioneer Mack Sennett, Fields made four short subjects during 1932 and 1933 which were distributed through Paramount Pictures.
He also contributed to the scripts of films using strange and unusual sounding pseudonyms like Charles Bogle. In several of his films he wrote and improvised all his dialogues. He often played the characters of hustlers, carnival barkers and card sharps in his films.
Continue Reading Below
His 1934 film ‘It’s a Gift’ is considered to be his funniest film. The film revolved around the adventures of a grocery store owner as he tried to manage a shrewish wife and annoying children with hilarious consequences.
He starred as Eustace McGargle in ‘Poppy’ in 1936 which was a film based on a stage revue of the same name. He portrayed a con man cum snake oil salesman in the movie.
During the late 1930s his career began to suffer because of his alcoholism. He also began to get fatter and was losing the charisma of his earlier days. Nonetheless he continued to appear in films.
He had his last starring role in the 1941 film, ‘Never Give a Sucker an Even Break’. He also wrote the original story, though under a pseudonym. The film got mixed reviews at the time of its release but is considered a classic. 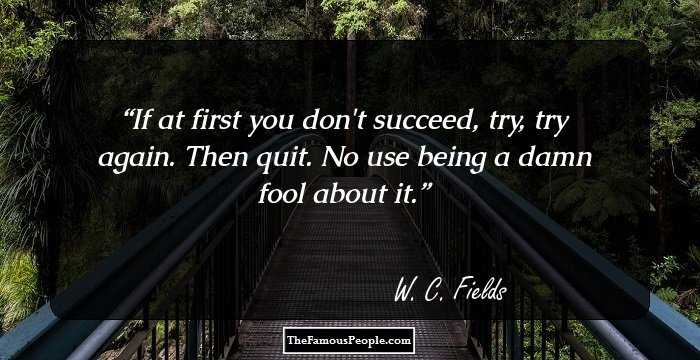 Quotes: You
Major Works
Considered to be one of the greats of early American cinema, W. C. Fields was a much loved comedian best know for his on-screen comic persona of a misanthropic, arrogant, clumsy and hard drinking egoist with a deep hatred for mankind and animals alike.
Personal Life & Legacy
He married a fellow vaudevillian, Harriet Hughes in 1900. They had one son. The couple separated by 1907 due to his unwillingness to give up show business and settle down in some other profession.
He was in a relationship with Bessie Poole which resulted in the birth of a son. Bessie was killed in a bar fight and her child was sent to a foster home.
He had a long term relationship with Carlotta Monti that lasted till his death.
He loved entertaining guests at home and had a huge library.
He had a long history of alcohol abuse and died of an alcohol-related stomach hemorrhage in 1946. 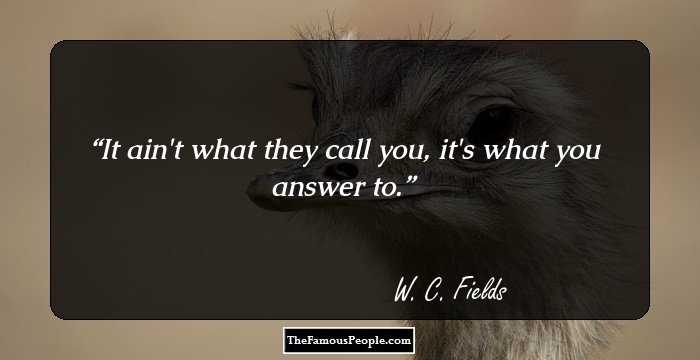 Quotes: You
Trivia
He was a big fan of Charles Dickens.
You May Like

See the events in life of W. C. Fields in Chronological Order