Clark Gable was an American actor best known for his role as ‘Rhett Butler’ in the epic historical romance film ‘Gone with the Wind.’ One of the top-rated Hollywood stars of the 1930s and 1940s, he was often referred to as ‘The King of Hollywood’ or simply ‘The King.’ He starred as the leading man in more than 60 motion pictures in a career spanning over three decades. A reel-life heartthrob of thousands of women, Gable was a notorious womanizer in real-life. The son of an oil-well driller, Gable was a teenager when he decided to become an actor instead of working on farms as his father wished. After struggling for a few years, he finally found work in theater companies and began his career as a stage actor. A theater manager named Josephine Dillon became his mentor and helped him enter Hollywood where he started appearing in silent films. Initially criticized for his looks, he soon emerged as one of the sexiest men in Hollywood. Subsequently, he was cast alongside prominent leading ladies of the time: Joan Crawford, Jean Harlow, Norma Shearer, and Ava Gardner. Gable is considered one of the most consistent box-office performers in history and was named the seventh-greatest male star of classic American cinema by the ‘American Film Institute.’ American Celebrities
American Men
Ohio Actors
Aquarius Actors
American Actors
Childhood & Early Life
William Clark Gable was born on February 1, 1901, in Cadiz, Ohio, USA, to William Henry "Will" Gable and his wife Adeline. His father was an oil-well driller and farmer. His mother died when Clark was a baby.
His father eventually remarried. His stepmother Jennie played the piano and gave lessons to Clark. She also raised him to be a well-dressed and well-groomed young man.
From a young age, he was drawn towards language and persuaded his father to buy him a 72-volume set of ‘The World's Greatest Literature.’
As a 17 year old, he saw the play ‘The Bird of Paradise’ which inspired him to become an actor. 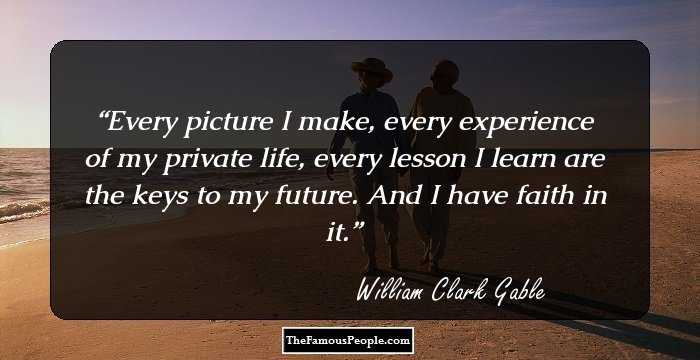 Continue Reading Below
Career
He struggled for a few years, and took up odd jobs before he found work at second-class theater companies. Along with his acting career, he also worked as a necktie salesman in the ‘Meier & Frank’ department store. There he met Laura Hope, an actress who encouraged him to pursue an acting career.
Still a struggling actor, he became acquainted with a theater manager named Josephine Dillon who was 17 years his senior. Dillon became his mentor and helped him groom himself for a career in films. She helped him develop a better body posture and better tone to improve his voice. After a period of rigorous training, she helped him enter Hollywood.
He began his film career with roles in silent films. He also continued playing stage roles until he gained a strong foothold in the film industry. By 1930, he had started gaining popularity as a stage actor which helped him land film roles.
His first leading role was in ‘Dance, Fools, Dance’ with Joan Crawford in 1931. From here it did not take him long to establish himself as a sought-after actor. He followed it up with ‘Susan Lenox (Her Fall and Rise)’ with Greta Garbo, and ‘Possessed’ with Joan Crawford the same year.
His success story continued throughout the 1930s with movies like ‘It Happened One Night’ (1934), which won him an ‘Academy Award,’ and the epic film ‘Gone with the Wind’ (1939), which went on to become one of the best American films ever made.
Gable suffered a personal loss in the 1940s when his wife Carole Lombard was killed in an airplane crash in 1942. Following her death, he joined the ‘U.S. Army Air Forces’ as per his wife’s wish prior to her death.
He trained as an aerial gunner and flew five combat missions over Europe over the course of his military career. He also made a propaganda film for the Army.
When he was discharged from the army in the mid-1940s, he returned to his film career. His fans were happy to see him return to films and flocked to the theaters to see him perform in the movie ‘Adventure’ which released in 1945. But the film was panned critically and Gable’s career was never the same again.
He continued appearing in films throughout the 1940s and 1950s. But he had lost the charm of his younger days. Unfortunately, he could no longer weave the magic he was once capable of. Gable’s last film ‘The Misfits’ released in 1961, a few months after his death.
Continue Reading Below 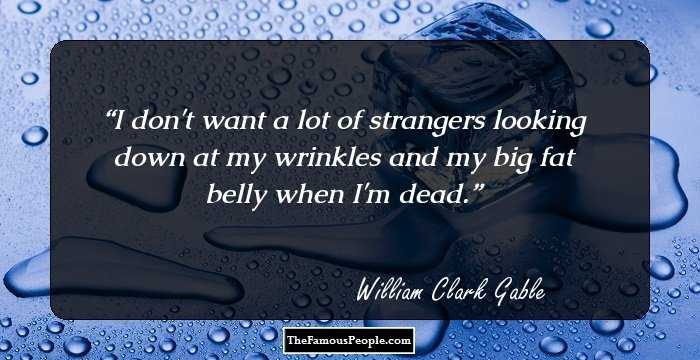 Major Works
The romantic comedy ‘It Happened One Night’ is counted among Clark Gable’s best known films. In the film, he played the role of a roguish reporter who falls in love with a spoiled heiress. The film was a super hit and became the first film to win all five major ‘Academy Awards.’
His iconic role of ‘Rhett Butler’ in the epic film ‘Gone with the Wind’ is one of his most famous roles. Set against the backdrop of the ‘American Civil War’ and Reconstruction era, the film became the highest-grossing movie at the time. It is also placed in the top ten of American Film Institute's list of top 100 American films.
Awards & Achievements
Clark Gable won the ‘Academy Award’ for ‘Best Actor’ for his performance in ‘It Happened One Night.’
Over the course of his military career, he won several awards, including the ‘Distinguished Flying Cross,’ ‘Air Medal,’ ‘American Campaign Medal,’ ‘European-African-Middle Eastern Campaign Medal,’ and ‘World War II Victory Medal.’ 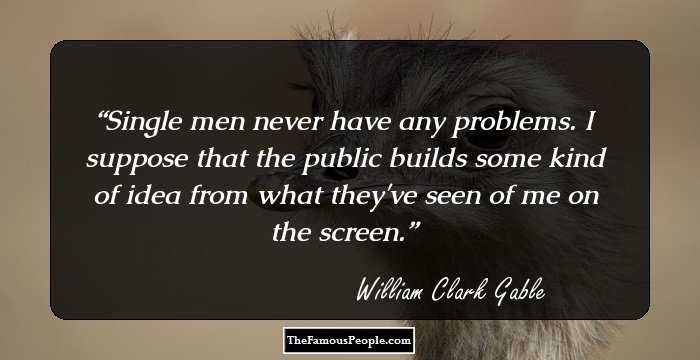 Personal Life & Legacy
Clark Gable was known to be a notorious womanizer. His first marriage was to his mentor Josephine Dillon whom he married in 1924 and divorced in 1930. His second marriage to Maria Langham also ended in divorce.
In 1935, while filming ‘The Call of the Wild,’ he impregnated the film's lead actress Loretta Young. She did not reveal her pregnancy to the public, gave birth in secret, and later introduced her biological daughter to the world as her adopted child.
Gable tied the knot with Carole Lombard in 1939. She died in 1942, leaving him distressed. He then married Sylvia Ashley in 1949 and divorced her in 1952.
His final marriage was to Kay Williams in 1955. She was pregnant at the time of Gable’s death in 1960 and gave birth to a son, John Clark Gable, a few months later.
Clark Gable died on November 16, 1960, from an arterial blood clot, ten days after a severe heart attack. He was 59.
Gable’s body was buried in the Great Mausoleum, Memorial Terrace, at Glendale's Forest Lawn Memorial Park, next to Carole Lombard and her mother’s grave.

Quotes By Clark Gable | Quote Of The Day | Top 100 Quotes

See the events in life of Clark Gable in Chronological Order